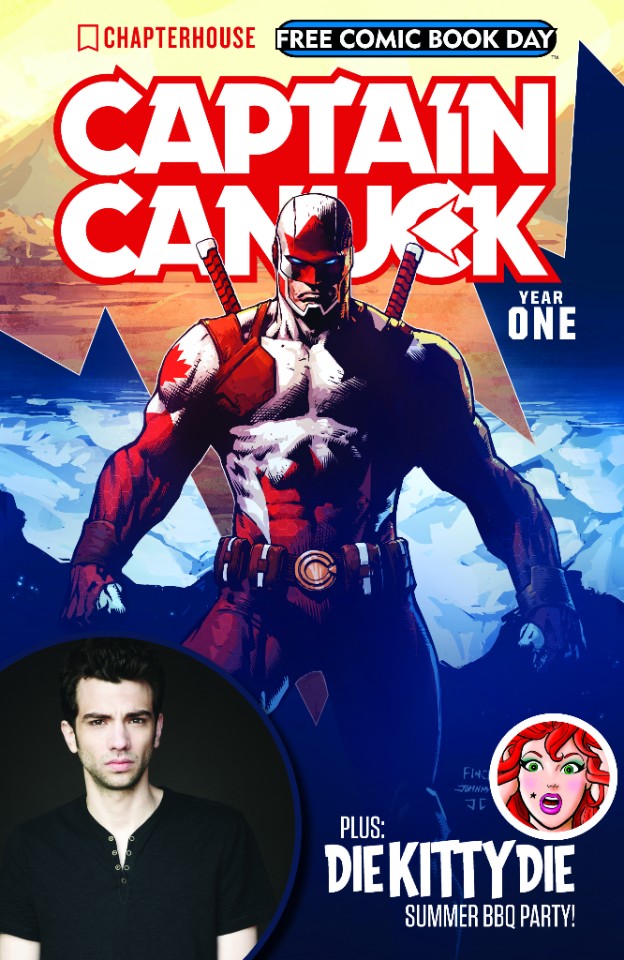 Jay Baruchel (Goon, Goon-Last of the Enforcers, This is the End, Man Seeking Woman, How to Train Your Dragon) joins the Captain Canuck team to co-write the Free Comic Book Day edition of Captain Canuck: Year One for Chapterhouse Comics with Editor in Chief and series writer Kalman Andrasofszky.

“Captain Canuck is a true Canadian icon and it is a humble honour to be involved in helping to shape the next generation of Canuck sagas for a new generation of readers and fans, as well as the die-hards that have followed Cap on his journey from the beginning”, says Baruchel. “Chapterhouse is doing very awesome stuff as they breathe new life into the world of Canadian comics. I am proud to be joining their ranks in this incredible adventure as we work hard to bring exciting stories and classic heroes to life for readers across Canada.”

“The Captain’s ranks keep growing” says Fadi Hakim, President of Chapterhouse and Captain Canuck Incorporated, “and we’re simply overjoyed to have a consummate talent and Canadian like Jay on board as we march forward!”

Canuck creator Richard Comely echoes Hakim’s sentiment: “Jay is one of the most prolific, well-spoken people I’ve met in this industry- I know the Captain is in good hands!”

The first of the three part series is drawn by Canadian superstar Marcus To (The Flash, Red Robin, Joyride) and features a cover by David Finch (Batman: The Dark Knight, Avengers, Ultimate X-Men).

Created and launched by Richard Comely in 1975 with over 250,000 copies sold worldwide, Captain Canuck was rebooted in 2013 beginning with an Animated Web Series starring Kris Holden-Ried (Lost Girl), Tatiana Maslany (Orphan Black), Laura Vandervoort (Smallville) and Paul Amos (Assassin’s Creed). The comic, published by Chapterhouse Comics was released with over 80,000 copies in May of 2015.