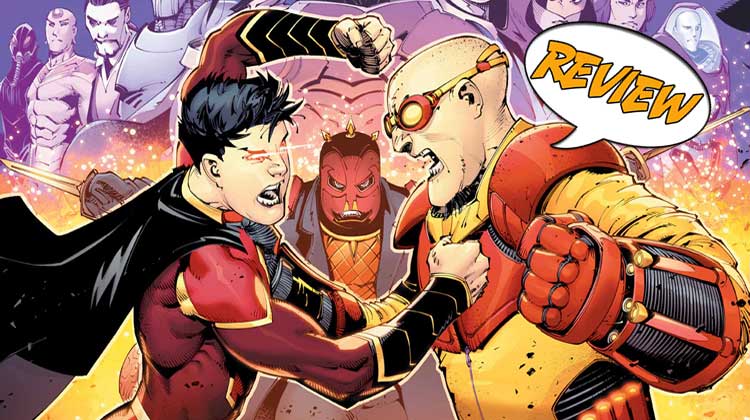 With the Rebirth event, I gave every comic DC was making as part of it a chance. Some I was impressed with, some I wasn’t.

One of the ones that really surprised me was New Super-Man. It has taken a very different approach to a “super” character, and given the difficulties of writing the Man of Steel and his family these days, I liked it a lot!

Previously in NEW SUPER-MAN: “MADE IN CHINA,” conclusion! Kong Kenan is in the fight of his life against the insane Human Firecracker and his Starro bomb! New Super-Man must confront his darkest demons as he tries to save the Bat-Man and Wonder-Woman of China! Alliances will be tested, heroes will be forged-and the shocking fate of Kenan’s family is revealed!

A ‘SUPER’ CHARACTER AT HIS BEGINNINGS

I probably say this way too much, but I think Superman is a very tough hero to write. He’s very moral and upstanding, and with his powers, we get a pretty good idea what he’s going to do as soon as a situation presents itself, unlike Batman.

Well, this comic puts a Super-Man in a very different environment, and that’s China. He works with The Justice League of China, all very much in the same position he’s in – just starting out and learning how to be a hero and manage his or her identity.

On many levels, this book reminds me of the new Justice League Action series now airing on Cartoon Network. It has lots of action and adventure, with some humor thrown in from time to time.

Rather than have to deal with Kryptonite, young Kenan has powers that seem to come and go, and they often fade away just when he needs them most. That means he often has to survive with his wits or depend on his comrades, including a new Bat-Man (who’s chubby) and Wonder-Woman. Really, this Super-Man needs his partners, quite the contrast to Kal-El, who often seems to need to drag along or defend his teammates.

The book takes advantage of previous Justice League continuity, including use of Starro and a very different group of Freedom Fighters. But all this adds an air of legitimacy to the title.

Maybe it’s just the “Teen Titans” feel to the comic, which helps us pull for them. After all, they’re almost always in over their heads, and they can rarely trust anyone else, including their own government.

Kinda fun, if you ask me!

I’m not sure if he inspired the art in this book, but I get a “Greg Capullo” feel to how the characters are portrayed, with battle sequences that are dynamic and character expressions that are stylized yet clear in terms of what each person is feeling.

The action sequences are very strong, and we are pulled in from the very first panel. Nicely done!

This issue concludes the first storyline, and there’s loss to be had, especially for Kenan. There’s something about father/son relationships in the comics, and it never really ends well. I felt for Kenan, who’s quite the happy adventurer… until the last few pages.

I plan on following this book continuing forward. It has a great cast of characters, a variety of situations around the heroes, and the freedom to go places we’ve never seen the “regular” Justice League go. I like that!

I worry about this series because I’d love for the sales to be better, so if you haven’t given it a whirl yet, I encourage you to do that. It’s fun to see a “super” hero unlike any other we’ve read about in the past!

It’s fun to see a “Super” hero unlike any other we’ve read about in the past!