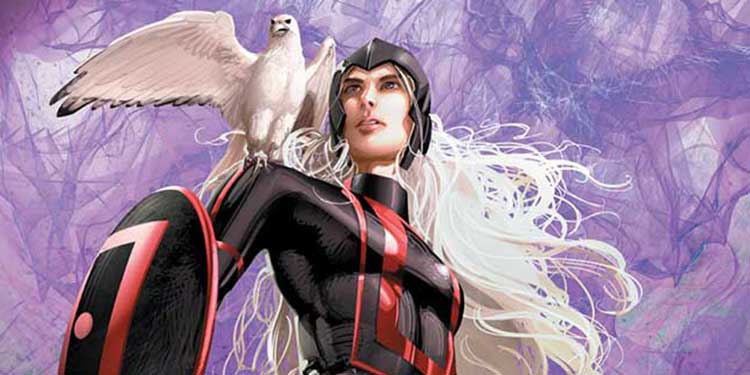 Valiant Entertainment is going all out with the Stalinverse event. In the process of creating a whole new take on the Valiant U, comic fans are getting four new characters. Arriving on December 21st is The Red Legend, who will appear in Divinity III: Stalinverse #1.

Following her initial debut in Divinity III: Stalinverse #1, fans will get an origin story in the Divinity III: Komanadar Bloodshot one-shot on December 28th.

But who is the Red Legend? She is a woman of immense power, birthed into the universe by unknown cosmic forces. No one on the planet knows where she came from…only that she was discovered deep in the heart of Russia, floating among the burning logs of an abandoned lumber mill. Raised under the muzzles of Russia’s brutal authoritarian forces, the Red Legend only knew a life of pain and strife as shed labored day in and day out at one of the world’s most unforgiving labor camps. She harbored a burning power inside her throughout these years however, as her true potential became ever more apparent. By the time she became a woman, The Red Legend was recruited by Myshka—the god-like champion of Communism—and embraced her destiny as one of the Stalinverse’ greatest protectors.

In an interview with The Hollywood Reporter, writer Matt Kindt explains The Red Legend is based on the Slavic folk tale “The Firebird.”

I wanted to tell the story of the firebird in its cage…and of course, the way I’m telling it — she escapes…and then the fun begins. The real-world version of that is one of a Jewish girl who grows up in a Russian work camp. Her adoptive mother was a political prisoner. That’s all the life that The Red Legend has known. As she gets older, she’s not content to be kept in this labor camp…and drama ensues. I also pulled some inspiration from the Book of Esther in the Bible, which tells the story of a woman who is torn between her duty to her people — the greater good — and her own personal safety and desire.

I like the aesthetic of The Red Legend, and want to see how this character plays out. According to Valiant Entertainment, the Stalinverse isn’t an alternate reality, and what happens in the four issue mini-series will have an impact across the Valiant line for the next year.

“The Red Legend, in particular, will be a central piece of those plans,” said Valiant CEO & Chief Creative Officer Dinesh Shamdasani. “This is a milestone first appearance in every sense, one that I would compare to the introduction of Valiant’s ’Wonder Woman’ or ‘Thor.’ The insanely brilliant Matt Kindt has done a masterful job crafting the creation of a new hero chiseled from the rich and untapped mythology of traditional folklore.”