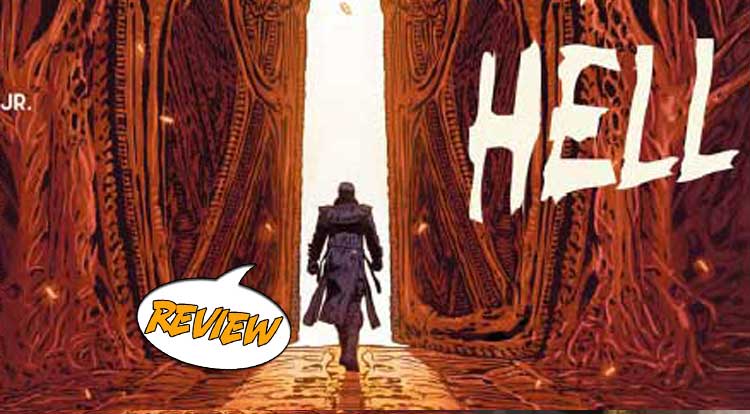 Midnighter And Apollo #3 (of 6) Review

Apollo has been taken by forces infernal, and now The Midnighter is ready to literally storm the gates of hell to get back the man he loves…  Your Major Spoilers review of Midnighter And Apollo #3 awaits!

Previously in Midnighter And Apollo: “With Henry Bendix’s trap sprung, it’ll be a long road for Midnighter to be reunited with Apollo, and the path will take him straight through the gates of Hell itself!”

With Apollo trapped in aitch-ee-double-hockey-sticks, playing a game of chance with Neron himself, Midnighter has to find a way to find his way back to his significant other.  Engaging Gregorio De La Vega, the former New Guardian once called Extrano, he has a magical pathway to hell and a spell that will allow him to fight his way out, albeit probably killing him.  All he needs is a legendary mystical weapon, the Ace Of Winchesters, an arcane rifle that will allow him to gun down even Neron.  Problem is, no one knows where it is…

The process of finding it, while Neron teaches Apollo the error of his hubris, Midnighter discovers the whereabouts of the gun, one bullet, and makes his way to the outskirts of hell, which looks remarkably like a Western town, with the promise of a mystical shootout next issue.

THE WONDER OF GREGORIO

This series has a lot of great continuity ties, from Neron to Henry Bendix to The Mawzir from ‘Hitman’, but the real star of this series for me has been the rehabilitation of Extrano, DC’s first homosexual character, from one-note joke to a truly imposing mystical presence, taking on a Doctor Strange role in these pages.  The tension between Neron and Apollo is also very impressive throughout the issue, with their dialogue as chilling as Midnighter’s demon-murdering ways.  The art is likewise impressive, as Fernando Blanco delivers on the concept of demonic guns and such, as well as making the battle sequences exciting and visually distinctive.  I especially find the facial expressions impressive, especially since each character has a their own unique face.

It’s a pretty remarkable issue, featuring action, intrigue and psychological warfare in equal parts, and a stunning last-page reveal, but the presence of Gregorio alone is worth the price of admission.  Apollo And Midnighter #3 is an issue strong enough to make me seek out the previous two and sign on for the rest of the series, earning 4 out of 5 stars overall….

Ingenious use of DCU history and lore, with solid art and some truly great dialogue...