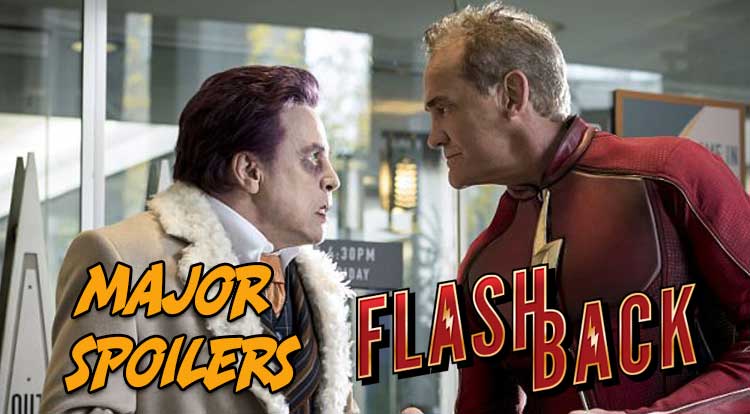 By Stephen Schleicher on December 7, 2016 5 Comments

Is this week’s Flash a Christmas miracle, or is Savitar gonna ruin it for everyone?

With Alchemy and Savitar still looming threats, Barry is unable to focus on the Christmas holiday, and especially his relationship with Iris. Determined to stop Savitar, Barry goes to Earth-3 to get advice from Jay Garrick (guest star John Wesley Shipp). Wally wants to help Barry fight Savitar and reveals that he’s been training with H.R., which doesn’t go over well with Barry. As Cisco faces his first Christmas without his brother Dante (guest star Nicholas Gonzalez), old wounds are reopened.

In the Multiverse, there are an infinite number of Earths, and the history of Earth-3 seems to have infinite variations as well.

Originally conceived by Gardner Fox and Mike Sekowsky in 1964, Earth-Three is a mirror image of our Earth. In other words, Christopher Columbus was American and discovered Europe, President John Wilkes Booth was assassinated by actor Abraham Lincoln, and the Crime Syndicate of America runs everything. Their biggest foe? Alexander Luthor, the only superhero on an Earth filled with villains. Lead by Ultraman, the Crime Syndicate ruled with an iron fist with Owlman, Superwoman, Johnny Quick, and Power Ring rounding out the alternate League. As you might expect, a world run by super-villains was very popular, but during the Crisis on Infinite Earths, Earth-Three was eliminated from the line-up, meaning writers had no access to the Crime Syndicate of America. In 1992, aliens from the planet Qward appeared as analogs to the Justice League, but since they were from an Anti-Matter Earth, they really weren’t the same as the CSA.

In Superman/Batman #1, the Crime Syndicate of Amerika appeared to protect Bruce Wayne, but in the end of the arc, it is revealed that the entire story is being told by Mr. Mxyzptlk, making the story completely untrue. Or is it?

In 2007, a version of the Multiverse returned following the excellent 52 series. At the end of the event, an Earth-3 does appear, and it seems to take on characteristics of the original pre-Crisis Earth-Three. Instead of the Crime Syndicate of America, Earth-3 has a Crime Society of America – essentially evil versions of the heroes of Earth-2, the home of the Golden Age heroes. To complicate matters, Grant Morrison still claims that the Antimatter Earth exists in Qward, meaning the Crime Society of America and the Crime Syndicate of Amerika, both exist.

To bring you to the present, during the 2013 Trinity War, Earth-3 is introduced as the home of true evil and the Crime Syndicate, which was modeled on Morrison’s Qwardian characters, but with changes to Ultraman to bring him more in line as an evil version of Superman.

If your head is spinning, that’s okay, because in The Flash, Earth 3 seems to be a different version of Earth 1, where the heroes and villains appear to be much older. As John Wesley Shipp said in an interview, “Jay is my version of Barry, 25 years later, essentially. So I went back and I watched a couple of episodes of the 1990/91 version to kind of remind myself what I did.”

If you would like to learn more about the Crime Syndicate of America, and get a great story at the same time, take some time and watch the Warner Bros. animated movie, Justice League: Crisis on Two Earths. James Jesse, the Trickster, first appeared in Flash #113 (June-July 1960) and was created by John Broome and Carmine Infantino. The Brahmastra is an actual thing in Sanskrit writing. According to Wikipedia, “The Brahmastra never missed its mark and had to be used with very specific intent against an individual enemy or army, as the target would face complete annihilation. It was believed to be obtained by meditating upon the Lord Brahma, or from a Guru who knew the invocations.”

Yes, EVERYONE got the meta tie-in to Harry Potter as Tom Felton, who plays Draco Malfoy in the movie franchise, explained the history of the Philosopher’s Stone – the title of the first Harry Potter book. To make it even more weird, Julian explains that his quest for the Philosopher’s stone began when he lost his sister Emma. Emma Watson played Hermione Granger in the movies. I wonder if we’ll get to see a Harry or a Ron in the second half of this season…

I still find it interesting that Julian Albert Desmond has a dissociative identity disorder just like Doctor Alchemy’s comic book origin in Showcase #13 from April, 1958.

THE DEATH OF IRIS WEST-ALLEN

So, for those wondering, Iris Allen does die in the comics. Leading up to the Trial of The Flash, Professor Zoom (remember that guy? He’s still around in DC’s Legends of Tomorrow as part of the Legion of Doom) vibrates his hand into Iris’ head, killing her. 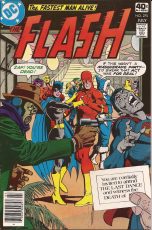 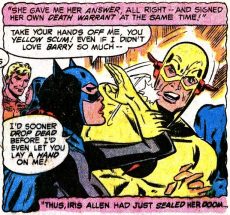 Years later, Barry kills Zoom while trying to prevent him from killing his new fiancee, Fiona Webb. This leads to The Trial of The Flash, and some interesting time travel elements including the revelation that Iris was originally born in the 30th century, and sent back in time, where she was adopted by Ira West where circle begins again. As I’ve mentioned before, the Death of Iris West seen in this episode, sets up a couple of story arcs that we could see play out soon. The first is The Trial of The Flash, and the second is the revelation that Iris is alive and well in the future – where she and Barry are not only happy together, and they conceive the Tornado Twin – Don and Dawn Allen. Don Allen eventually marries Meloni Thawne – YES, THAT THAWNE – and become the parents of Bart Allen (aka Impulse). Dawn Allen marries Jeven Ognats – YES, THAT OGNATS – and they become the parents of XS, the speedster member of the Legion of Super-Heroes. I’m still thinking we are getting a slow-burn build up to a major Legion of Super-Heroes arc or series spin-off in the next season or so.

This week, we got a ton of named locations that tie back to comics.

FOX BANK
The Trickster of Earth-3 is robbing Fox Bank. Gardner Fox is a legendary comic book creator, responsible for creating The Flash in 1940, as well as Hawkman, Sandman, Atom, Batgirl, Zatanna, and the Justice League of America, among others.

INFANTINO STREET
When Barry travels to the future, he finds himself on Infantino Street. Carmine Infantino created the Silver Age Flash, which included Iris West, which makes it fitting that is the street she dies on.

THE FUTURE, FLASH OR THE FUTURE FLASH
As we saw during the Invasion! event, at some point in the future, Barry sends a message to Rip Hunter and the DC’s Legends of Tomorrow, telling them they shouldn’t trust Barry when they see him again. So, is Barry’s brief visit to the future showing us the future, or a future Barry that is evil?

The way words and phrases are delivered this week is very interesting. When Savitar says, “The Fake Wells,” is he referring to H.R. not being the Wells of Earth-1,Earth-19, or is H.R. hiding something? When Savitar says, “One shall betray you,” we get a shot of Wally West. “One shall fall,” and we see Cisco, not Iris. And, when Savitar shares, “One will suffer a fate far worse than death,” we get a close up of Caitlin. Are the creators giving us a glimpse into the future fates of some of our favorite characters, are are we getting swerve designed to make at least one of the predictions more shocking (in the case of the death of Iris)? This is one of those moments that should have fans guessing for the next couple of weeks, as the show goes on its winter break.

Jeez, Barry. You come face to face with a villain who has been plaguing you for half the season, and you reveal your identity? Way to go, Barry. Way to go.

And that should be everything! What did I miss? What did you catch? Use the comment section below to share your thoughts on this episode, and until next week remember – Run, Wallace, Run!