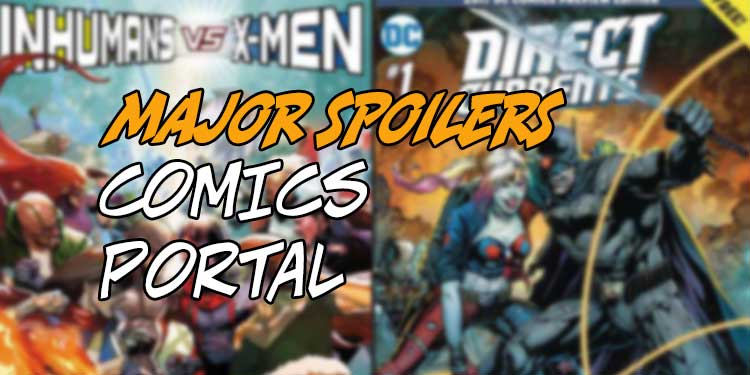 COMICS PORTAL: Are You Picking Up Free Comics Magazines?

This week a new version of DC’s Direct Currents free quarterly periodical arrived in comics shops, taking its place alongside Marvel’s Free Previews to provide information about upcoming titles from that company.

In this era of Internet instantaneous communication, including Facebook and Twitter, why produce a slick, four-color, glossy publication about your products?

There are good and bad sides to this, so let me explore some of them.

GET YOUR WORD OUT YOUR WAY There have been many publications discussing comics, including Wizard Magazine, The Comics Journal, Comics Shop News, and many more. Some have moved to the Web while others have faded away, but let’s just say that publishing is an expensive and time-locked profession that’s becoming harder and harder to survive in. Just look at the newspaper industry, for instance!

There are advantages to putting out your own magazine, for sure! First up is that you don’t have an editorial filter to work through. What I mean by that is, as much as we’d like every editor to be “facts only” without putting their own spin on things, it’s particularly tough in periodicals to make that happen. You’ve only got a once-in-a-while shot at communicating with people, so many editors tend to want to communicate things the way they want them to be instead of letting the readers make that call.

That’s one of the reasons weekly news magazines and daily/weekly newspapers have collapsed, in my opinion.

But you can avoid that struggle if you publish it yourself. You create the magazine from the ground up, and it tells your story your way. You can release information, such as who the “big bad” in the upcoming Justice League/Suicide Squad team up is going to be! Things like that get people’s attention, for sure!

Granted, some folks want the hard questions asked, and there will be plenty of opportunities to ask them, like at conventions. But sometimes you just want to get information to your fans as “directly” as possible, and that’s why you revive Direct Currents, for instance.

It also works because, as fans, we all sit down and read the latest issues of our comics, so we’re in “reading mode” at some point in our experience. A Free Previews takes advantage of that by adding a look ahead as to what’s coming that we might want to be aware of while we’re reading.

That makes perfect sense to me. I’m already reading my comics, why not read about them as well?

As I’ve already mentioned, publications are on the way out, if they’re not hanging on by their fingernails, at this point. There are many reasons for this.

Whenever you buy a publication about comics, you don’t buy an actual comic itself. That’s why these guys are free these days. Also, the second your periodical rolls off the press, it’s out of date. Things happen while you’re generating your magazine, and just after, but you can’t go back to press the moment something changes. You have to stick with what you have until the next issue.

Facts and rumors are so easily accessible on the Internet that it makes buying publications about comics almost ridiculous. If someone speculates that, say, Scott Snyder isn’t going to be writing any Batman any longer, the whole Web knows about it almost the second it’s posted online. If you’re going to print that, you have to write it, edit it, design it, print it, and distribute it. That’s weeks, if not months, for this to happen.

If you’ve checked the cost of paper and ink recently, you’ll see that they’ve pretty much skyrocketed to where most newspapers lose money with every copy of an issue they print. If you’re a comics publisher, you often can’t afford that to happen.

However, if you want the chance to release information nobody else can get, then by all means, go for it! But expect that you’ll lose money when it comes specifically to this venture. You need to make the costs up with higher sales, of course! Free Previews presents pages from upcoming comics so you can get a taste as to what they’ll be about. There are also full-page ads about titles that you’ll see soon.

On the other hand, Direct Currents has feature stories about the upcoming news and books. These articles have original content and new art with them.

The latter takes more time, but can be more entertaining. It all depends on what you want to communicate about your organization. Bigger and more entertaining often means an organization that’s got the same attributes. Smaller and more focused can show you care more about the product than being perceived as funny. But take each of those with a huge boulder of salt because who does it also impacts what it communicates.

There’s also a size difference, with Marvel employing a format much closer to the size of comics while DC makes a magazine-style publication. Personally, I think bigger is better, but that magazine also sticks out when put with comics, so it’s more likely to be bent, crunched and folded, so you’ll likely never going to be able to keep it in mint condition (as if you’d want to).

Take my advice: Magazines like these and other publications like Previews don’t increase in value. They do take up space, however, so don’t worry about keeping them in pristine, mint condition! And throw them out when you no longer need them! Really!

As someone who used to work for a “large, metropolitan newspaper,” I can point out that when times get tough, one of the first things to go will be “extras” like free publications. If they stop (often without notice), you can be sure the bottom line is in need of repair. Also, if they aren’t worth the money being spent in terms of reaching the fans, they’ll also disappear.

Please note that just about all comics companies have websites full of information as well. What will make these worth doing will be providing information fans can’t get anywhere else. Again, it’s an expensive venture, and the Internet can often be faster and cheaper, so fan response will likely have an important impact on keeping these magazines going.

If you like them, let the companies know! Just go to their websites and send an email expressing your appreciation. If folks know these publications are having an impact, they’re more likely to keep them going.

Did you pick up these free publications? If so, did you read them? What did you think of them? If you didn’t get them, why not? Please be sure to share your thoughts in the space below!