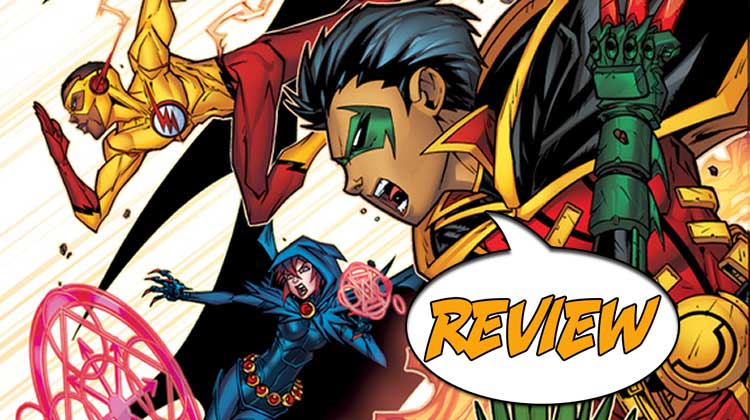 I’ve long been a Teen Titans fan, even back to the Mister Twister “origin” story. When younger heroes get together, it’s always fun for me.

Now we have two, count ’em, two “Titans” books, one with that original team, and this one with something resembling the Marv Wolfman/George Perez era group. It’s off to a good start, I think!

Previously in TEEN TITANS: “Damian Knows Best” part two! Ra’s al Ghul’s forces make their move! But are Damian and the newly assembled Teen Titans ready to take on such a deadly threat?

TEENS IN THE TEAM AGAIN

One of the problems the Teen Titans have faced over the years is that they had to grow up some as they continued on. Hence the new Titans comic.

The real problem is when you replace the popular members with new ones. They don’t always live up to the luster the previous members had. This incarnation, though, has a lot going for it.

I always chuckle when I see how popular Damien Wayne is. I mean, Grant Morrison brought him “back” to kill him, and yet he’s outlived all that. I’m taken by the kid, even when he’s truly rude and uncaring about others. He’s still the son of Batman, and that makes him, well, better than many other heroes… except Batman, of course.

A new Kid Flash (one of color), and three “original” friends such as Raven, Beast Boy and Starfire make up a fascinating group. Of course, Robin mucks things up, in his usual overbearing ways, but in this issue, things start to come together after the gathering that took place last time. Of course, when you have to take your attention away from Robin and fight someone else, Damien’s a good guy to be following!

Lots of action as well as great character moments as the Teen Titans get to know each other better the best way they know how – on the battlefield!

Quick pacing, lots of action and surprises here, so I’m engaged in this Rebirth title already!

A great script can only draw so many people to buy your book, but strong art that catches your eye on the stand can make a HUGE difference. Luckily, this title has both.

The art is dynamic, the action moving powerfully from page to page, so I give high marks to this book’s excellent art team!

Teen Titans is a perfect example of what the Rebirth event has been all about – returning to the core of what made this book so popular while also updating some necessary items.

I do hope, though, that we’ll eventually see a few “new” Teen Titans along the way. After all, Cyborg, Starfire and Beast Boy really added a lot to that first New Teen Titans. Some new heroes would keep that spirit going, I think!

Since there have been only two issues so far, this is a great time to jump on board! Check with your local shop or go digital if you need to, but I think you’ll enjoy this title!