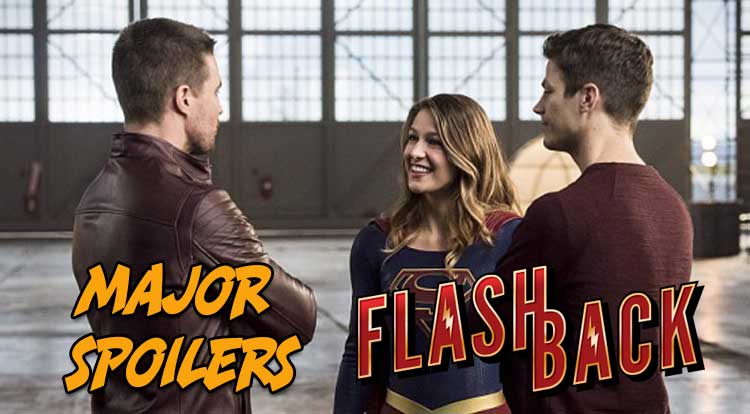 THE ALIENS HAVE INVADED! ALIEN, ALIENS!

INVASION
When aliens called the Dominators attack Central City, Barry speeds over to Star City to ask the Green Arrow for help in stopping them. Realizing the battle against the Dominators is bigger than they thought, they track down the Legends of Tomorrow, and Barry and Cisco create a breach to bring back a secret weapon – Supergirl. Once all of the super friends are assembled, they come up with a plan to attack but a shocking secret related to Flashpoint is revealed and suddenly no one is sure who they can trust. Meanwhile, Wally wants to join the battle against the aliens but Iris tells him he’s not ready. Following Crisis on Infinite Earths, DC Comics needed a major force to shake up the (then) current DCU. Alien forces from across the universe joined forces to bring an end to the mutants of Earth, but what they didn’t realize is that superheroes are always going to find a way. Always. Going. To. Find. A. Way.

Several months ago, the Major Spoilers podcast reviewed the three-issue mini-series in detail. Give it a listen for more information and our reactions to the original storyline.

Though we knew Baby Sara became Baby John, Diggle discovers the change occurred without his knowledge in this episode. There were a few other Flashpoint fallouts that were revealed this week that you may have questions about.

Hey, Professor Stein has a daughter! A daughter he never knew he had until now.  Christina Brucato has been cast as the recurring character for the DC’s Legends of Tomorrow series, but Lily Stein has not appeared in comics – yet. One thing Barry hasn’t checked on since his return from Flashpoint is that copy of the Central City Picture News from the year 2024. In season 1, we knew the article about The Flash’s disappearance during The Crisis was written by Iris West-Allen. Now that Barry has changed the timeline, it looks like the relationship between Barry and Iris will change… forever… again.

I’ve speculated that we might get a Trial of the Flash event arc this season. For those that don’t remember, The Trial of The Flash comes about because Iris is killed by The Reverse-Flash, and Barry kills The Reverse-Flash. With Iris’s name missing from the newspaper by-line, her death may become a reality. Of course those of us really in the know, know that Iris lived out her days in the 30th century.

Back to Julie Greer though…

Julie Greer is a reporter for KN News, and first appeared in Flash Vol. 2 #231 in October 2007. She only appeared in comics twice, once again in Flash #238.  Julie Greer was created by Mark Waid and Daniel Acuna. When Barry seeks the help of Green Arrow, he saves Diggle and Oliver from Vigilante – a villain Green Arrow has been trying to take down. Vigilante is a character that has been around forever, Action Comics #42 in November 1941 to be exact. As the name suggests, Vigilante works outside the law taking down mobsters and gangsters with extreme prejudice. While the character has gone by different names over the decades, the most recent version of Vigilante appeared in Nightwing #133 (August 2007), written by Marv Wolfman and Jamal Igle.

If you are wondering if Berlanti Productions is taking a jab at Marvel’s The Wizzer, the answer is, NOPE! The Wizard of Whiz is just another nickname people have used for The Flash. It’s like Scarlet Speedster, or the Crimson Comet. It is also not a reference to Whiz Comics, the home of Captain Marvel, before DC sued the publication into the ground. If there is one thing we’ve learned this week that will affect every Flashback article going forward is we now know the alternate Earth designation for Supergirl (formerly Earth-CBS).  According to creator Andrew Kreisberg, Supergirl comes from Earth-38. Get it? Superman debuted in 1938, which lead to Supergirl joining the Super-Family in May of 1959.  Why not call it Earth-59? Maybe because DC is committed (at this time) to having only 52 Earths in the Multiverse.

Speaking of Supergirl, the version we know today, appeared in Action Comics #252 in May, 1959. She was created by Otto Binder, who also created the Legion of Super-Heroes, and Al Plastino. Going by the name Kara Zor-El, she is the biological cousin of Superman. She survived the destruction of Krypton by living in the protected city of Argo City until the protective dome was pierced by a large meteor shower, forcing Zor-El to send his daughter to Earth. THE HALL OF JUSTICE Though the Hall of Justice appeared a couple of times in comics in the Pre-Crisis universe, it was truly introduced into DC Comics continuity in Justice League of America #7 in May 2007.

The newest Hall is located on top of the location of the former bases of the Justice Society of America and the All-Star Squadron, previously known as the Perisphere, which existed there during World War 2. The Hall was designed by John Stewart and Wonder Woman and was financed by Batman. Unlike the Super Friends’ Hall, it is not designed to be the central headquarters for the heroes, but rather more a museum of sorts to allow the public to witness firsthand what the heroes do.

What many people do not realize is that the Hall of Justice exists in our Earth. In 1933, Cincinnati’s Queen City’s Union Terminal opened. It was a beautiful art deco masterpiece for the day.

The main building is a huge half domed rotunda built with limestone and glass. It is the largest semi-dome in the Western hemisphere. Inside you will find mosaic murals by German artist Winold Reiss, a gold and yellow arc following the top of the rotunda, and many other beautiful features that you need to see for yourself. In the front is a large illuminated fountain and pool. With the opening of Union Terminal, the city was able to consolidate 5 rail terminals. Union Terminal served 7 major railroads and could accommodate 216 trains a day. With air and auto travel becoming more and more popular, train service declined and by 1972 all train service stopped at Union Terminal. – via Queen City Tour

If you live in Cincinnati, or looking for a place to visit, the Hall of Justice is definitely a destination location.

The other important bit of knowledge that is finally starting to gel is Barry recognizes that he owns all of S.T.A.R. Laboratories.  This will be important as the series goes on.

Well, it went by unnoticed by nearly everyone, but until this episode, Heat Wave didn’t know Barry was The Flash… And he didn’t even blink.

And that should be everything! What did I miss? What did you catch? Use the comment section below to share your thoughts on this episode, and until next week remember – you’re not a god, Barry.