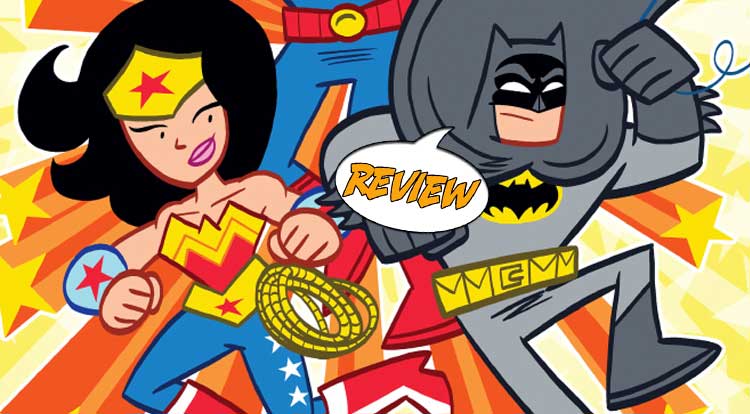 But what IS the threat, anyway?  Your Major Spoilers review of Super Powers #1 awaits! Previously in Super Powers: I could take the time to tell you the origins of Superman, Batman and Wonder Woman, explaining the who’s and why’s of their histories, but I imagine even the youngest readers among us know at least part of that.  Instead, I’ll ask all of you the riddle that I asked my kid today:  Why are eggs benedict best served on a silver hubcap?

THE DARK KNIGHT IS MISSING

We open in Gotham City, as Commissioner Gordon desperately stands by his Bat-signal, trying in vain to call the city’s caped crusader to deal with an uptick in crime.  Instead, what he gets is a Man Of Steel, as Superman arrives to answer the call and report that Batman has gone missing.  Superman deals with Batman’s gallery of rogues quickly (Penguin amusingly asks when his regular hero will be back), and we discover The Dark Knight being held on New Krypton (an enlarged city of Kandor, orbiting the sun on the opposite side of the galaxy from Earth.)  Superman quickly discovers, thanks to The Riddler’s compulsion to leave clues, that none other than Brainiac is behind the kidnapping of the Bat, rushing off to save his World’s Finest friend.  Meanwhile, on Paradise Island, Queen Hippolyta tells her daughter that her colleagues are in grave danger, and that Wonder Woman is needed to balance the scales.

THE TRINITY IN ACTION

There’s a lot of story here, as well as a lot of explanations of how everything pieces together, but perhaps my favorite part is the revelation that Jor-El and Lara are both alive on New Krypton, allowing Superman to interact with his long-lost parents for the first time in years.  Baltazar and Franco have great fun playing with the DCU history and lore here, while giving us a a clear, simple adventure story that still has mysteries and drama for an older audience.  The art is likewise clear, a little bit different from what I expect from this team in their previous Tiny Titans and Itty Bitty work, but wonderful to look at from page to page.  Their Wonder Woman costume should also be the norm, using the classic design elements and colors, but adding pants!

In short, this is a book I want more of, and I’m ready to sign on for all six issues right now, in the hopes of seeing more in this vein.  (Perhaps a Baltazar/Franco JLA or Doom Patrol?  One can but hope.)  Super Powers #1 is fast, fun and charming, providing all-ages stories in the truest sense of the term, channeling the spirit of classic DC without the dismemberments and such, but never skimping on the story or excitement, earning 3.5 out of 5 stars overall.

And the answer is: “‘Cause there’s no plate like chrome for the hollandaise.”