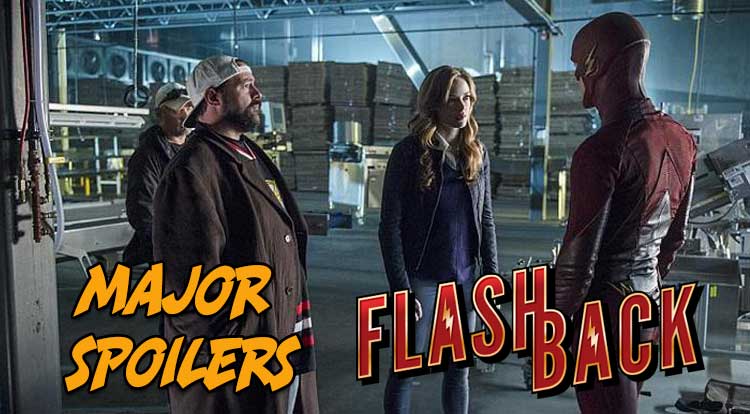 Caitlin uses her powers to save Barry, but as her mother predicted, the effort unleashes her inner Killer Frost. Killer Frost goes on a rampage looking for Dr. Alchemy, kidnapping Julian and battling both The Flash and Vibe. Meanwhile, Joe and H.R. have a heart-to-hear talk. Kevin Smith directs.

NOTE: We have talked about Killer Frost, Doctor Alchemy, and Savitar in previous installments of Flashback.  This installment will only look at the new comic book ties that popped up in this week’s episode.

NOTE THE SECOND: Julian is revealed to be Doctor Alchemy, right? RIIIIIGHT!? Maybe. I’ve shared my theories on the duality and repetition we are seeing in characters this season. I don’t think everything is as cut and dried as you might think. Be sure to take a listen to the Flashback Podcast for more discussion about this reveal.

Last week we saw Iris West take out Wally with just one punch. This week, we got to see it again, as The Flash finally let one fly to poor, poor, hapless Julian. Again, this great moment from comic book history happened in Justice League #5 from 1987. Yes. We’ve said it before – you really need to read that series so you can discover the joy that is the Bwa-ha-ha-League.

ALL STAR TEAM UP

Ring theory and duality continue this week, as H.R. and Joe West team in what H.R. calls an “all star team up.” All Star Team Up was the title of Flash Season 1 episode 18, that featured Flash and The Atom teaming to fight Brie Larvin. All Star Comics was originally published by All-American Publications. It eventually merged with National Periodical Publications, and then eventually formed DC Comics. What is great about All-Star Comics is it told the story of the Justice Society of America – a group we’ve already seen appear in DC’s Legends of Tomorrow. The JSA would eventually get a modern day makeover as the Justice League of America, and we’ll get to see a team up of heroes next week when Invasion! lands in our laps.

All Star Comics introduced the world to Wonder Woman in January 1942 and the Injustice Society in All Star #37. All Star Comics was renamed All-Star Western in 1951, essentially ending the comic just before the Silver Age of comics.

All Star Comics was revived in 1976. It continued the original numbering, essentially ignoring the All Star Western run. The revived All Star Comics gave us the tales of the modern day JSA. This week, we were introduced to Detective Tom Patterson. While there is no DC Comics character with that name, Tom Paterson is a Scottish artist who started working for Fleetway in 1973 and D.C. Thomson in 1986. His most famous creation is Calamity James.

Playing Detective Patterson is Greg Grunberg. I don’t have a personal dislike of the actor, as I don’t really know him, but he has become super well known as a That Guy actor who pops up in everything from Heroes, Felicity, Star Wars, Alias, and now Flash. He is good friends with J.J. Abrams and you can bet that if it is a J.J. joint, Grunberg will show up eventually. Grunberg is also the co-host on Geeking Out with Kevin Smith, who directed this week’s episode, so it shouldn’t come as a big surprise that Smith found a spot for his friend. The problem I have with Grunberg is he is such a That Guy Actor, that I am instantly drawn out of anything he is in, breaking the magical storytelling that is taking place. Whenever he appears, you’ll always hear me give an audible “ugh… that guy.”

The important question is, “Will we have more of Detective Patterson in future episodes?” It’s been a while since we’ve seen Director David Singh, and I’m wondering if he’s been quietly written out of the show. When Grunberg was hired for this show, it was announced it was a recurring role. When Joe and H.R. are staking out a suspects house, H.R. mentions Barry is full of hope. During DC Comics’ Sinestro Corps War, the Blue Lantern Corps was introduced.

Their powers, similar to those of other organizations based around the emotional spectrum, are fueled by the emotion of hope.

The leader of the Blue Lanterns is Saint Walker, and while on Earth fighting Black Lanterns, he made Barry Allen a Blue Lantern member.

Doctor Alchemy’s acolytes are living among us! One is located at Truman Place. Tim Truman is an comic book artist who worked on many DC titles including Sgt. Rock.

The other acolyte is living on Hawthorne Avenue.  During the first season of Arrow, it was revealed there was a list of people who had ruined Star City. On the list was one Ben Hawthorne. It would be interesting to see that this list of people’s influence has extended beyond Star City – maybe in the form of philanthropic endeavors that may have lead to a city street being named after them.

Mike Hawthorne is a freelance artist who has done a lot of work for Marvel, but has done some work for DC Comics. Most recently you can see his work in Action Comics #23.1: Cyborg Superman.