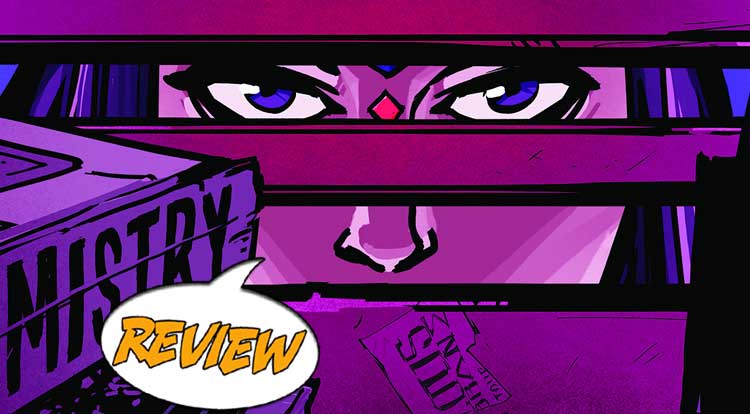 The founding New Teen Titan known as Raven is once again in the spotlight, and there’s really one overarching question: What happens when you don’t remember the greatest threat you’ve ever faced?  Your Major Spoilers review of Raven #3 awaits! Previously in Raven: The daughter of Trigon, an extra-dimensional demon from beyond the pale, Rachel Roth first fought then joined the Teen Titans.  In the lacuna between the end of their old book and the events of Teen Titans Rebirth, she has taken some time off and moved to San Francisco, staying with her human mother’s sister and experiencing family for the first time.  She’s also going to high school, which has given her a whole new cast of supporting characters, all of whom are now in danger of being absorbed by a spiritual threat known only as The White Carnival…

This issue opens in the middle of a giant battle with a white-void-creature of unknown origin, with Raven struggling to keep her own composure while saving her new friends from death.  I really enjoy Wolfman’s Raven dialogue, a first-person narrative with a sardonic edge that makes her feel authentically teenage and disaffected.  It also gives us specific information about her abilities and background in an organic way, rather than with a caption infodump.  Raven engages the creature, and is overwhelmed…

…only to wake up in her room at Aunt Alice’s house.  The addition of Arella/Angela’s family to her life is unexpected for me, as Raven has always been a “suffer in silence and occasionally turn into a demon” kind of character, and I’m uncertain whether or not I approve.  Regardless, Raven now has a family to protect, and her powers allow her to once again regain her memories and return to the battle.

There’s a Bill Sienkiewicz edge to Alisson Borges’ art that I appreciate, giving Raven’s uncanny powers an eerie, inhuman edge, but there are a few confusing layouts in this issue that required a second look before I understood what was happening.  Raven still has her hood/mask that looks like feathers encircling her face, which I don’t like, but Borges makes it look okay in context, and the dream-like sequences of the White Carnival are genuinely disturbing.  As for the story, the reveal of a group of costumed neer-do-wells behind the Carnival is well-handled, and the spokes-villain’s dry dialogue is lovely, but the plotting of this story feels awkward, starting, then stopping, then starting again.  On the other hand, it does add to the disconnected, ethereal feel of the story, so maybe it’s intentionally meant to be disorienting.  (Given that it’s Marv writing, I’m willing to give the benefit of the doubt…)

The transition from team player to solo hero isn’t always an easy one, and no lesser light than Kurt Busiek has said that there are characters who simply can’t hold their own in single-hero stories, but thankfully this story makes it clear Raven can.  Though there are a few issues with pacing/plotting, Raven #3 establishes a lot of character for Raven’s friends and family, gives us a primer on her powers and abilities and makes it clear that she’s a much better hero than she thinks, earning a better than average 3 out of 5 stars overall.  I’m definitely willing to give this one a chance to really get cooking with this creative team, but do you think it’s too much to ask for just one “Azarath Metrion Zinthos!” along the way?