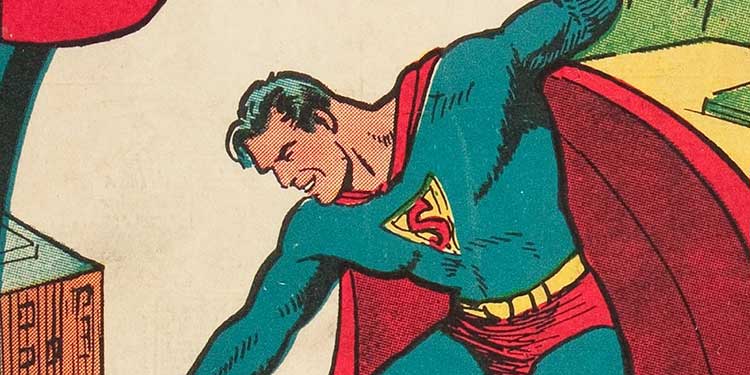 [Auction] Superman #1 is on the auction block right now

If you have always dreamed of owning a copy of Superman #1, and you have deep pockets, then you are in luck as not only does Heritage Auctions have a copy of the issue on the auction block, we have a Patreon page for those extra nickels you have kicking around.

The auction is runs Thursday through Saturday in Beverly Hills, California, and it will feature a CGC 4.5 graded copy of Superman #1. The issue is expected to go for at least $300,000 for the unrestored copy. Other issues up for auction include:

Steve Ditko Amazing Spider-Man #27 Splash Page 1 Original Art (Marvel, 1965) (est. $300,000) is a highly coveted lot that features an appearance by Spider-Man’s greatest nemesis, “The Green Goblin,” who makes just his fifth story appearance in this issue, just a year after his introduction. As it turned out, this was the last “Goblin” story that Ditko would illustrate before leaving the title. Ditko original art pages draw the eye of collectors everywhere, and such images can serve as the foundation for many collections. The page was crafted in ink over graphite on Bristol board (13.25 inches by 22 inches) with an image area of 12.5 inches by 18.5 inches. The Spider-Man logo is the original state paste-up for this lot, which is graded in Excellent condition.

Spider-Man makes another appearance on the list of this auction’s most in-demand items, in The Amazing Spider-Man #1 Curator Pedigree (Marvel, 1963) CGC NM+ 9.6 White Pages (est. $200,000). This copy is in remarkable condition, which is not surprising considering its inclusion in the Curator Pedigree collection, in which white pages are the expected standard. In addition to being the first issue of the most-collected series of the hobby, it is the second appearance of Spider-Man and the first appearance of supporting characters “John Hameson,” “J. Jonah Jameson” and “the Chameleon.” Jack Kirby and Steve Ditko are credited on the cover.

The first appearances of “Joker” and “Catwoman” can be found in Batman #1 (DC, 1940) CGC FN- 5.5 Off-White Pages (est. $100,000). The two are among the reasons for the issue’s appearance on Overstreet’s list of Top 100 Golden Age Comics. The significance of the Batman series is evident in part because of the fact that the title has been in continuous publication for more than 75 years. Some thought the “Joker” was intended to be a one-off character, a theory that gained credibility when his death at the end of the issue was changed to a non-fatal injury. “Catwoman,” who still is called “The Cat” in this issue, stood out for the instant romantic attraction she shared with “Batman” – an idea that is shown in this issue when he “accidentally” lets her escape. This issue features a retelling of Batman’s origin and a classic cover by Bob Kane and Jerry Robinson, and is one of the top 20 CGC-graded copies.

Also featured will be the Eric Sack Collection – Masters of Underground Art, which includes 224 lots and is the largest of its kind and has been exhibited worldwide in museums examining the counterculture art movement of the late 1960s and early 1970s. The surprisingly diverse collection spans original cover art; illustrations; complete, multi-page stories and even album cover art. The collection’s subversive messages perfectly capture the disarming work of a select group of artists who were dedicated to shining a light on society’s ills and contradictions.

Which issues will you bid on?

You can find out more about these issues and more at the Heritage Auction website.