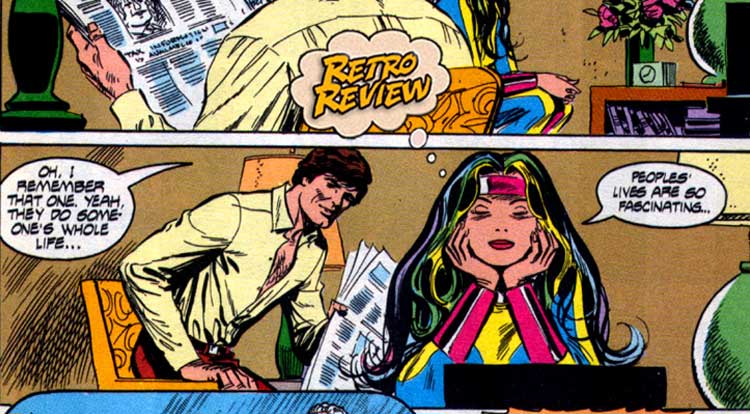 Some comic book stories are all about great and terrible connotations and world-shattering consequences.  Others are just about relationships.

Of course, even those can still have the world-shattering part…  Your Major Spoilers (Retro) Review of Crossfire And Rainbow #1 awaits! Previously in Crossfire And Rainbow: Artificial beings created by the Matrix Corporation, the DNAgents were genetically engineered with superhuman capabilities.  Rainbow, the group’s de facto leader, has been imbued with powerful telepathic abilities, able to read minds and projects illusions directly into the minds of her antagonists.  Jay Endicott is a bail bondsman, more than a little bit reminiscent of a certain James Rockford, who accidentally took possession of a special suit that allowed him to fly and do additional investigative work in the line of duty.  During one of his cases, Jay was badly injured (the story implies in several places that he was clinically dead) but was saved by an infusion of Rainbow’s not-exactly-blood.  The chance encounter led them to a relationship, but it’s a complicated one, as he’s a streetwise fellow from Los Angeles, and she has little experience with life outside of a laboratory.

Thus, we open at Jay’s apartment, as our unlikely duo prepares for bed… I remember reading this book a couple of years after it came out (Eclipse comics didn’t make it to my neck of the newsstands, so I had to find them in back issue bins during my college years) and being impressed with how adult the matter of sexuality was handled.  Rainbow is emotionally in her late teens, making the normal relationship straits a bit more daunting than your average date.  Things are made even more complex by the fact that Jay and Rainbow are being monitored… With the masked Crossfire making headlines around LA, it was only a matter of time before someone came looking to find him, and Jay being seen with the same rainbow-hued superhero as his alter ego helps make it easier to put two and two together.  Of course, Mr. Endicott is more consumed by his unorthodox new relationship than worried about the “secret identity” trope… Mark Evanier has written a LOT more comics than you think, but he never fails to get me with moments like this.  Rainbow, who for some reason finds her racing mind calmed by Jay’s presence, falls immediately into a dead sleep, but Jay is plagued by restlessness. Thanks to his own personal demon (I don’t know if that’s a pun or not, but feel free to send your answers to Old Pink, care of the Funny Farm, Chalfont), Jay is taken through his life, unraveling his ever interaction with women and girls, all the way back to his first realization that he liked them, back in grade school… As things progress, Jay realizes that most of his past relationships have been damaged by his own inability to communicate, whether it be telling the girl he had a crush on in high school of his feelings, or in pursuing beautiful people he isn’t really into, just for some sort of status points… I’ve always loved the art of Dan Spiegle, one of the unsung old-school geniuses of comics, dating all the way back to fifties Dell Comics.  Most of his modern work, like his wonderful run on ‘Blackhawk’, was in concert with Mark Evanier, so it’s great to see him in these pages, delivering a little extra emotional punch to Jay’s parade of humiliation.  Jay’s emotional surges (DNAgents pun) wake his telepathic lady-friend, only to discover an intruder, seeking proof that Jay and Crossfire are one and the same… Another lovely part of Eclipse Comics for me?  The way that having super-powers is never normalized, as the slightest revelation of Rainbow’s psionic might sends the mook running for the hills in utter terror, like super-powers probably would. Poor timing on Rainbow’s part leads her to “overhear” only the part of the dream objectifying the beautiful girls of his past, and she leaves the apartment upset, missing the part where he muses on the woman who means the most to him in all his life: Her. Remembering how she saved him, Jay awakens with a start, only to find Rainbow gone.  He worries that he will never understand her, or she him, bumming me right the heck out.  Even worse, while the police are seeking Crossfire to capture him, a lunatic calling himself The Witness wants to hunt him down.

Guess who’s waiting when Jay ventures out into the night? Crossfire makes a quick escape (only after forgetting he didn’t have his wings, and that only after leaping out a second story window), but his injury and turmoil are “heard” by Rainbow, who quickly sets out to find him again.  Worse still, The Witness isn’t deterred from his insane pursuit of the masked “criminal”… Returning to his office, Jay Endicott is shocked to find his friend Lou waiting for him, now aware of his secret masked double-life… This issue is the first of a four issue miniseries that fits into Crossfire continuity (indeed, replacing his regular book for a couple of months, while picking up all the plot-threads), and it does lead to a better ending than Jay’s moping would imply.  (Of course, the DNAgents’ last issue has all five of the heroes returned to suspended animation indefinitely, including Rainbow, pregnant with Jay’s child, so it’s not exactly a happy one.)  Crossfire And Rainbow #1 is a comic I remember fondly, featuring a nuanced story, lovely art and moments that feel authentically human, something that wasn’t always the norm in comics of 1986, earning a very impressive 4 out of 5 stars overall.  Although the end of Eclipse Comics and these characters is anticlimactic and sad on a number of levels, it’s lovely to pull out the books and just enjoy these unusual stories.