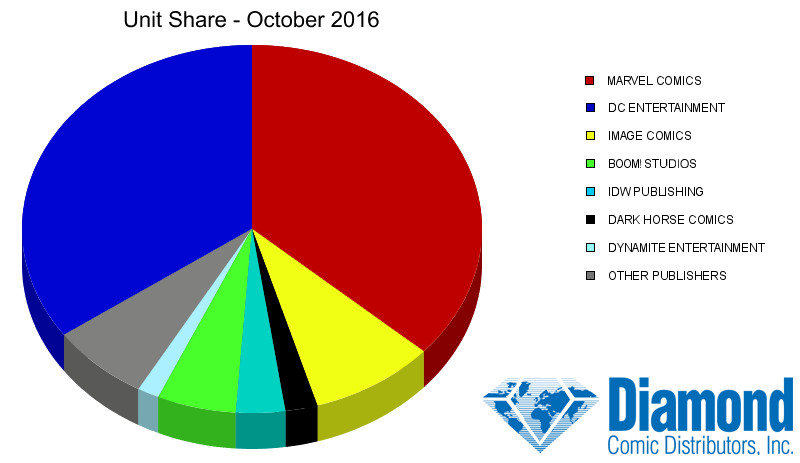 For those who were biting their nails waiting to see if DC would once again trump Marvel in the race to the top of the sales charts, you are either breathing a sigh of relief or running in the streets looking for someone to blame. Marvel has moved to the top of the charts for October 2016.

Marvel had four titles in the top ten lead by Mark Waid and Humberto Ramos’ Champions #1. But surprisingly, it wasn’t Marvel or DC that had the number one book for the month. That honor goes to BOOM! Studios’ Big Trouble in Little China/Escape from New York #1! No, really! Take a look at that list for a moment. Both DC and Marvel had four titles in the top ten, neither one could take the number one spot, and yet Marvel still sold the most comics overall.

In August 2016, over 10 million comics were sold. That number dropped 20% in September, which had some people shaking their heads, even though 8,000,000 comics is nothing to sneeze at (unless you didn’t store them correctly, and mold and mildew have grown on them, then sneeze away). So how did October do? According to Diamond Comic Distributors, comic sales climbed 18.35%, which almost brings the loss from September back to the magical 10 million mark. This jump in October kept overall growth at 2.86% compared to 2015.

We’ll have the complete rundown of the top 300 comics sold in the direct market on Monday.