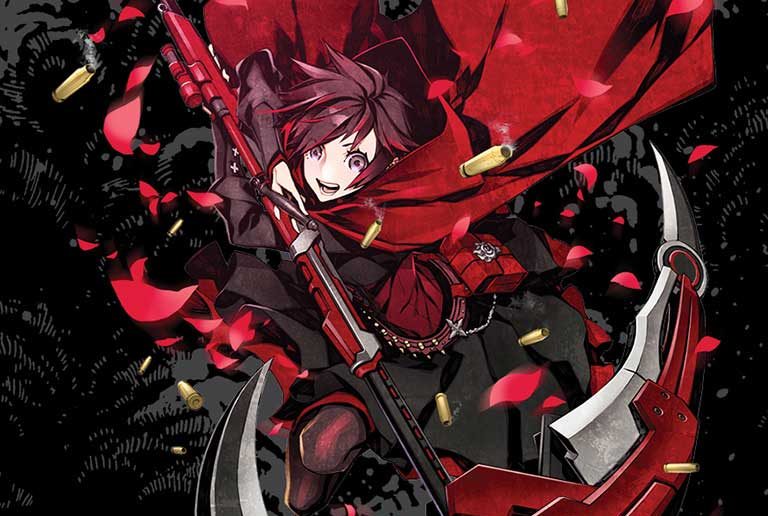 VIZ Media, LLC (VIZ Media), a premier company in the fields of publishing, animation distribution, and global entertainment licensing, adds a riveting new title to its WEEKLY SHONEN JUMP lineup with the launch of RWBY in today’s issue of the world’s most popular manga magazine.

RWBY is an action-driven adventure inspired by the popular online anime series created by Monty Oum and produced by Austin, TX-based Rooster Teeth Productions. The manga is set in the future-fantasy World of Remnant and introduces readers to a group of four young adventurers who train at Beacon Academy to become Huntsmen and Huntresses in order to protect their world from monsters. The RWBY manga is written and illustrated by Shirow Miwa, who is widely acclaimed for his series DOGS: BULLETS AND CARNAGE (also published by VIZ Media).

A special FREE Chapter 1 of RWBY is available in the SHONEN JUMP section of the VIZ website (VIZ.com/ShonenJump). New RWBY digital chapters will be available exclusively to WEEKLY SHONEN JUMP subscribers every Monday.

In RWBY, humans and beasts once coexisted peacefully in the magical World of Remnant. Now they are at fierce odds. Ruby Rose, Weiss Schnee, Blake Belladonna and Yang Xiao Long are Team RWBY, classmates at the Beacon Academy, learning the deadly craft of hunting the monstrous species known as the Grimm.

“This is the RWBY that you know and love, but with a twist. Not just an adaptation, this new story is a prequel, depicting events taking place before Ruby, Weiss, Blake and Yang were in the Academy in Volume 1 of the animation,” says Joel Enos, Senior Editor. “You should expect to see some all-new reveals and backstories for the characters in each new chapter that’s available digitally each week in WEEKLY SHONEN JUMP!”

Manga creator Shirow Miwa debuted in UltraJump magazine in 1999 with the short series Black Mind. His next series, DOGS, was published in the magazine from 2000 to 2001 and instantly became a popular success. He returned in 2005 with DOGS: BULLETS & CARNAGE, which is currently running in UltraJump. Miwa also creates illustrations for books, music videos and magazines, and produces doujinshi (independent comics) under the circle name m.m.m.WORKS. Fans can visit his personal website at http://mmm-gee.net.

WEEKLY SHONEN JUMP is published digitally each week by VIZ Media and features the latest chapters of some of the world’s most popular manga series released to English readers across North America as well as the U.K., Ireland, South Africa, Australia, New Zealand, India, the Philippines and Singapore on the same day as the magazine’s general print release in Japan. International issues debut each Monday at 10:00am (PST) and monthly subscriptions are available across all territories.

Rooster Teeth is a pioneering studio responsible for some of the biggest online series in history, such as the award-winning and longest-running web series, Red vs. Blue. They also produce the globally acclaimed animated series RWBY, the first western anime series to be distributed in Japan; the award-winning Rooster Teeth Podcast; and Immersion, a reality format that brings video game theory to the real world. Rooster Teeth has a massive global footprint of more than 28 million subscribers to its YouTube Network, 3 million unique monthly visitors to its RoosterTeeth.com hub and 1.8 million registered community members. The company was founded in 2003, and is now a subsidiary of Fullscreen, Inc., a global youth media company that develops online creators and produces multi-platform entertainment experiences. Discover more at RoosterTeeth.com.