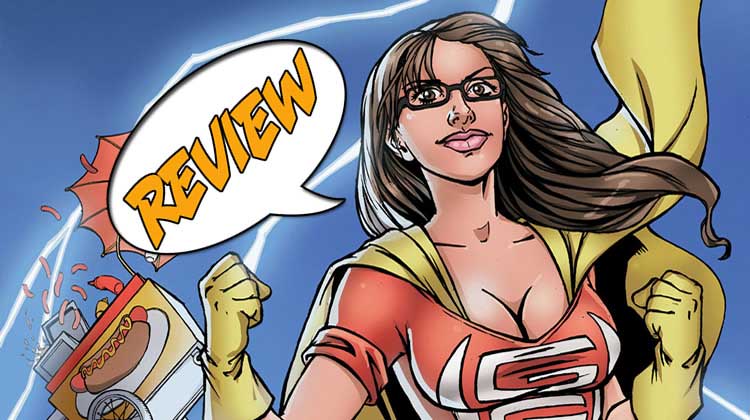 Anyone who’s read my previous reviews and listened to my podcasts know I enjoy female leads in comics. I also enjoy it when those women are varied – in other words, not as perfect as some others may prefer them to be.

So along comes Geek-Girl #1 from Sam Johnson and company. She’s seriously out of her league when super-powers come to her, and it’s fun to see her journey begin, knowing that she has a long way to go before we see her final adventures.

Previously in GEEK-GIRL: When “Little Miss Popular” Ruby Kaye lands a pair of super-tech glasses (invented by brainiac college geek Trevor Goldstein) in a game of Strip Poker, she’s granted flight, super-strength, and – due to a flaw in the glasses’ programming – super klutziness! And this is just the beginning of changes the glasses will wreak on Ruby!

WHAT IF YOU RECEIVED SUPER-POWERS?

I always enjoy Sam Johnson’s writing because he has a particular way with dialogue. I always find the people he’s writing to be real, genuine and someone I just might meet in my day-to-day life.

Given that this book is about someone with super-powers, that’s really important! Ruby Kaye is in a place just about all of us geeks would love to be! But she’s got a lot to learn, from how important a secret identity is to functioning in a world with heroes and villains. Sam makes her fly off the page, sorry for the pun, and I feel for her as she struggles to deal with the changes happening to her so quickly. I also like his ability to breathe life into her supporting (and, I guess, opposing) cast. I really enjoyed getting to know these people!

The book also poses the question: What would happen to US in the real world if we received powers like Ruby receives? I actually think she does a better job of adapting than most of us, myself included.

Is she perfect? No, thankfully! I have many friends who tell me a woman lead character in storytelling must be benign, maternal and flawless so that she’s an example for other women. See, I don’t buy that approach because men can be everything from ideal to scoundrels when they are leads, and that’s okay! I like it when women fall in that spectrum and are actually human, frankly!

Sam does a very good job of setting up things that will take place in future issues, including the brother of a super-heroine who Geek-Girl must avenge. What’s up with him? I gotta know!

I found the pacing overall quick and fast-moving, but even the times when there are conversations going on, I was pulled forward. Of course, knowing super-hero lore is a big advantage in this title, but Sam has a friend for Ruby who helps her along these lines … and can be a boon to those readers who many not understand what capes and cowls are all about, too.

I found the art in this issue to work well with the script, doing an excellent job with facial expressions as well as action sequences.

I also liked the use of colors and various shadings on Geek-Girl and those around her. There was no static coloration unless it moved the story along, and that didn’t happen often.

BOTTOM LINE: A NUMBER ONE WORTH READING

It’s taken some time for Sam to get the team together, but I think he’s done very well in making this issue sparkle and be worth your hard-earned quatloos. It’s important to me that the women aren’t just “men with (female appendages),” as some like to say. They’re people and yet still believable, and I look forward to following the adventures of Ruby, her friends and foes in the months ahead. Geek-Girl puts the human back in super-human.

As I read this issue, I keep wondering just how I and my friends would deal with the circumstances Ruby finds herself in. Speaking for myself, I’m glad she’s the one figuring out what to do! I wouldn’t be nearly as successful!

Geek-Girl #1 debuts this Wednesday, November 2, on Comixology. Print versions are also available from Markosia in the future. For more information, go to this link!

Geek-Girl puts the "human" back in "super-human."