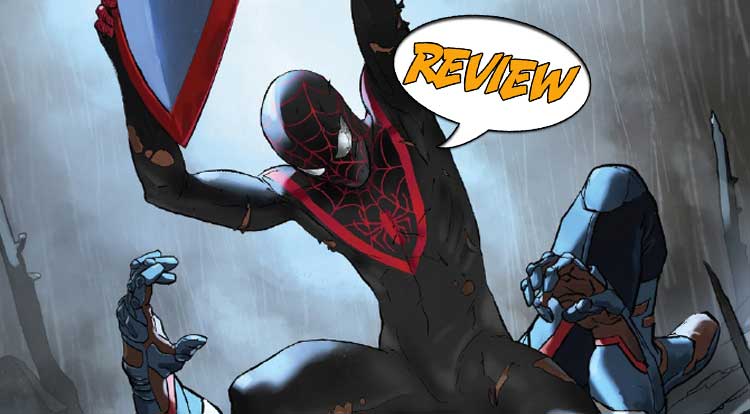 Protect the future or change the future?  Will anyone walk away unscathed?  Your Major Spoilers review of Civil War II #6 awaits!

Previously in Civil War II: “Iron Man extracted a woman whom Captain Marvel was holding, based on a prediction from Ulysses, leading to a violent battle between his forces and Captain Marvel’s that left the Triskelion in ruins.   But the battle came to a halt when Ulysses shared a dire vision with the assembled heroes: Miles Morales, AKA Spider-Man, murdering Steve Rogers, AKA Captain America, on the steps of Capital Hill.”

I TOTALLY HATE THIS CONCEPT

There were flaws with the original Civil War book, notably the fact that Iron Man’s side was often written as clearly both the aggressors and the villains of the piece.  Civil War II makes a much better case that their central premise has two equally correct sides, but the execution of the piece is such that Captain Marvel is again treated as aggressor/villain.  After last issue’s sudden massive super-battle, we open with Captain Marvel trying to arrest Spider-Man, only to get a chastising from Iron Man.  She then attempts to take him into custody “for his own protection”, not realizing that her own allies are turning against her.  Captain America steps in, asking Spider-Man what he wants, and the young hero says “I want to go home.”  Captain America tells him to do so, shutting down Captain Marvel’s protestations with the reminder that two heroes are now dead, entirely thanks to her crusade.  Black Panther refuses to continue with Captain Marvel’s crusade, Ms. Marvel stops her from trying to recapture Spider-Man, and Medusa takes her teleporting dog and simply walks away, leaving Carol Danvers nearly alone…

THE CHARACTER INTERACTIONS ARE NICE

This issue is nearly all conversation, and many of them are quite good, especially Star-Lord’s defense of Captain Marvel and Storm apologizing that her ex-husband turned on Carol.  The formation of the Champions starts here, as Cyclops, Ms. Marvel, Amadeus Cho, Nova and Riri Williams sneak out of Iron Man’s bunker (he remarks that he knows what they’re doing, and can’t decide if he’s more annoyed or proud), and Kitty Pryde starts to doubt her boyfriend again.  The big plot-point here is the stranding of the Guardians Of The Galaxy on earth, and the revelation that Ulysses powers are much more fallible than Captain Marvel implies.  The art in this issue is lovely, as always, and the final page reveal of Spider-Man (or, at least someone wearing Spider-Man’s costume) on the steps of the Capitol, just as in the vision, is a strong one.  But even excellent art doesn’t cover up the biggest issue of the book: It seems to be plotted on the fly, and doesn’t feel like it was plotted as well as it could have been.

There is much drama and changing of sides here, but it’s all presented as conversation and stalking away, which makes it feel like the issue is light on story.  (It’s actually not, quite a few characters make important decisions in this issue which change the nature of the conflict, but the way it is presented makes it easy to miss a lot of that.)  Civil War II #6 is the story of the bottom falling out for Captain Marvel, featuring lovely art and a story that dwells much on the talky-talky but misses the importance of the conversations, earning a still-better-than-average 3 out of 5 stars overall.  Even if you’re not fully on-board with what’s going on here, there are pieces of an excellent comic book here, they’re just not fully assembled yet…

A talky issue that doesn't do much, but still manages to give us a lot of character stuff that I like...