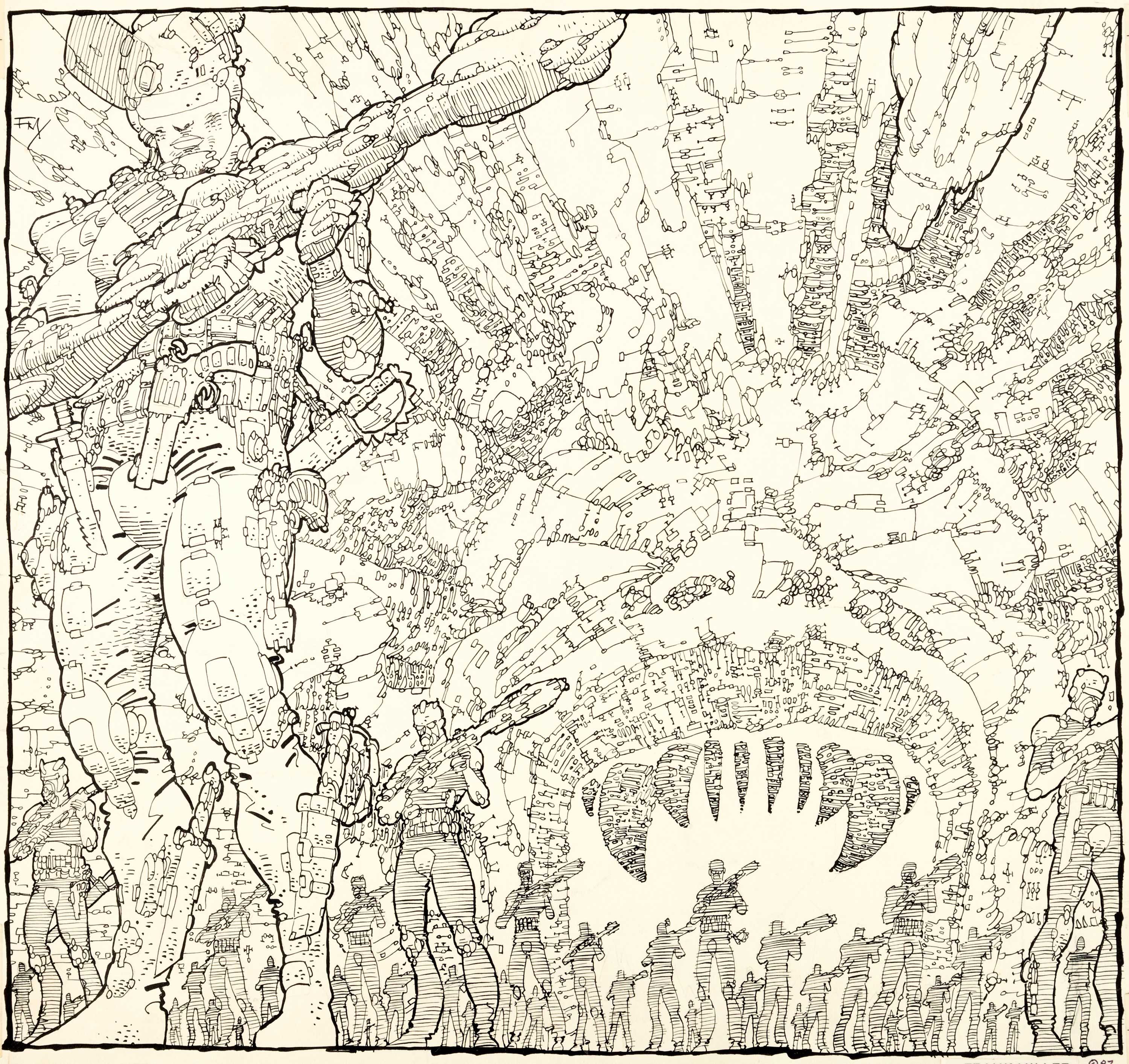 To celebrate it’s 30 anniversary of protecting First Amendment Rights of the comics community, the Comic Book Legal Defense Fund (CBLDF) and Heritage Auctions are offering 11 important works at auction from the 1987 “A Benefit Portfolio in Defense of the First Amendment” that led to the creation of the non-profit organization at auction. Developed in partnership with IDW Publishing, consulting supporter of CBLDF’s auction campaigns, the original art will be offered during Heritage Auctions autumn Comics Auction Nov. 17-19 live in Beverly Hills and on HA.com.

“In November 1986, Michael Correa, a clerk at Illinois comic book store Friendly Frank’s was arrested and charged with selling obscene material,” said Charles Brownstein, Executive Director of the CBLDF. “This was not the first prosecution of comics, but it was the first time the industry came together to do something about it. Thanks to the artists who contributed to this portfolio, Michael was set free, and the CBLDF was formed to permanently defend the rights of our industry.”

Correa was originally sentenced by the circuit court of Cook County to court supervision for one year and ordered to pay $750 in fines and costs. His conviction was overturned on appeal by the Illinois Appellate Court.

The original art by many of the portfolio’s contributors represent some of the biggest names in comics, including rare and important works such as the Unpublished Original Cover Art for Ronin #4 by Frank Miller (est. $20,000); the Unpublished Original Cover Art to Weirdo #18 by Robert Crumb (est. $10,000); a highly-relevant Original Art of Groo and the Thought Patrol by Sergio Aragones (est. $2,000); and Reed Waller’s Original Art of Omaha the Cat Dancer (est. $2,000).

“This art represents a fledgling effort: Artists defending Correa’s legal bills in defense of his First Amendment right to sell comics,” said Todd Hignite, Vice President of Heritage Auctions. “The portfolio was the group’s first major fund raising effort and by all measures it was a huge and lasting success.”

Also included is an original piece by Howard Cruse (himself a contributor to this classic portfolio) that was created in support of a later case supported by the CBLDF, the Florida case of Michael Diana in 1992-94 (est. $2,000).

The 11 lots celebrating the 30th Anniversary of the Comic Book Legal Defense Fund will be offered Nov. 17-19 in Heritage Auctions Autumn Comics Auction live in Beverly Hills and on HA.com.

ABOUT THE COMIC BOOK LEGAL DEFENSE FUND
Comic Book Legal Defense Fund is a non-profit organization protecting the freedom to read comics! Our work protects readers, creators, librarians, retailers, publishers, and educators who face the threat of censorship. We monitor legislation and challenge laws that would limit the First Amendment. We create resources that promote understanding of comics and the rights our community is guaranteed. Every day we publish news and information about censorship events as they happen. We are partners in the Kids’ Right to Read Project and Banned Books Week. Our expert legal team is available at a moment’s notice to respond to First Amendment emergencies. CBLDFis a lean organization that works hard to protect the rights that our community depends on. Please support our important work! http://cbldf.org

Heritage Auctions is the largest auction house founded in the United States and the world’s third largest, with annual sales of more than $800 million, and over one million online bidder members. For more information about Heritage Auctions, and to join and receive access to a complete record of prices realized, with full-color, enlargeable photos of each lot, please visit HA.com.

Want to get the up-to-the-minute updates and breaking news stories about Heritage Auctions? Follow us on HA.com/Facebook and HA.com/Twitter. To view an archive of Heritage press releases go to: HA.com/PR. To link to this release on your blog or Website: HA.com/PR-.