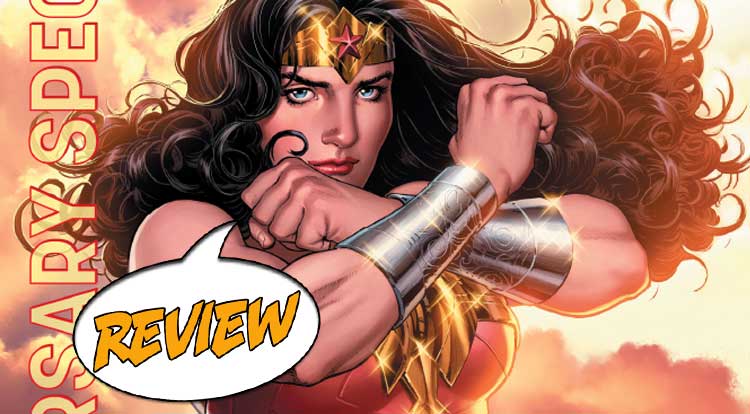 It’s a diamond anniversary for the Amazing Amazon, one of the most recognizable superheroes of any era…  Your Major Spoilers review of Wonder Woman 75th Anniversary Special #1 awaits!

Previously in Wonder Woman 75th Anniversary Special: It was the fall of 1941 when William and Elizabeth Marston collaborated to create a superhero whose strength lay not in superior force, but in the power of love.  Thus did Princess Diana leave Paradise Island, purchase the identity of a young nurse named Diana Prince and create her double identity, protecting the weak and powerless with the abilities given to her by the gods of Greek myth as Wonder Woman!

This book is a pretty massive undertaking, with over 70 pages worth of Wonder Woman, spanning different eras of real-world and comic book time.  The leadoff story in this issue is set in 1944 occupied France, featuring Wonder Woman as a symbol of hope and freedom from tyranny, featuring a very Amazon-inspired look from artist Rafael Albuquerque.  That story compares her to Joan Of Arc, but other tales feature her protecting a tiger from a poacher, serving as a role model to others, even protecting a defeated foe from an angry mob in the name of justice and mercy.  The stories in this issue range from two pages up to about eight, including an extended “magazine interview” conducted by Lois Lane (and written by former WW scribe Greg Rucka) and at least one story where Wonder Woman doesn’t actually appear at all.  Many different aspects of the character are showcased, including some that haven’t really been part of the New 52 version of the character, such as the wonderful tale by Renae De Liz where she stops Baroness Von Gunther’s evil scheme by finding and saving her foe’s lost daughter.

LOTS OF METAPHORICAL BANG FOR YOUR REAL BUCK

Anniversaries, especially in modern comics, can be a mixed bag, so when I say that this issue reminds me of 80’s DC’s celebration of 400 issues of Superman and Batman, be aware: That’s a good thing.  They don’t just focus on the current new hotness of Wonder Woman (something which I felt was present in the Superman anniversary a couple of years ago), instead honoring multiple eras of her history and acknowledging the complexity and occasional difficulty of her comic book history.  My favorite story in the issue, by Hope Larson and Ramon Bachs, features Wonder Woman encountering a villain while trying to navigate shopping at an Ikea-style furnishing shop, with Diana by turns heroic, hilarious and wonderfully relatable as a character.  (The final story, featuring a brand-new hero teaming up with Wonder Woman, who acts as inspiration and role model, is also perfect, thanks to creators Gail Simone and Colleen Doran.)

THE BOTTOM LINE: A FITTING TRIBUTE

Also worth noting, for those who have to watch their budgets: The $7.99 cover price is a bit steep, but you’re getting not-quite four issues (or $12, at current DC pricing) of content for that eight bucks, and the quality of what’s in the issue made me not regret it one bit.  Wonder Woman 75th Anniversary Special #1 is a good’n, featuring a wide variety of characters providing their perspective on what make Wonder Woman awesome (I almost put wonderful, but…  too on the nose) and should be a must-have for Wonder Woman’s fans, earning 4.5 out of 5 stars overall.  If nothing else, we now have a Wonder Woman version of Jim Lee’s “superhero standing, boot up on the edge of a precipcie, looking out for us all” pose to go with the Superman and Batman versions…

Even the least of this material is quite good, and it's a wonderful tribute to DC's greatest character. The only downside is the price point, but with this much to offer? I'll forgive it.