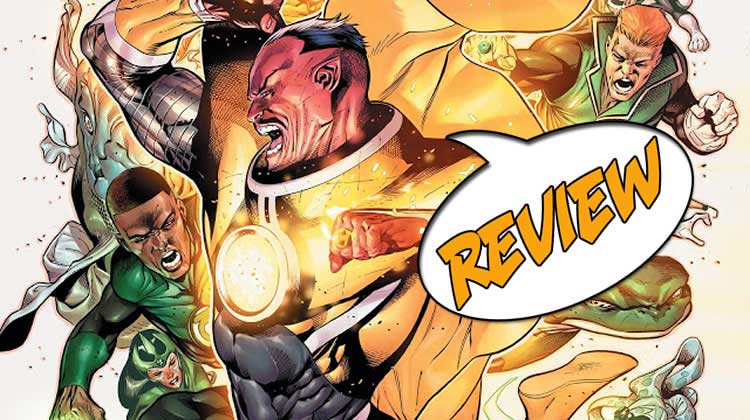 I still have friends who tell me that once Geoff Johns left writing Hal Jordan’s exploits, no one could possibly take his place. Well, you’re not reading the current book Hal Jordan and the Green Lantern Corps, obviously!

A lot of other people pretty much seem to agree that this title, along with Detective Comics, are the best books coming out as a result of DC’s Rebirth.

This issue pretty much wraps up the first storyline, and it’s a great conclusion!

Previously in HAL JORDAN AND THE GREEN LANTERN CORPS: “SINESTRO’S LAW” part seven! “Sinestro’s Law” concludes as Hal Jordan and Sinestro come to blows for control over the universe. With his back against the wall, will Hal’s friends show up in time to tip the scales in his favor?

Robert Venditti has made a career out of writing dynamic sci-fi stories. In the last several years, he’s dived into comics, and his writing continues to sparkle.

Yes, Geoff Johns definitely is a hard act to follow, but Mr. Venditti has shown it can be done … if you understand the characters and GL lore!

He did some interesting things with Hal before Rebirth, but I feel he’s really kicked it into high gear with this initial story.

Let’s face it – Hal versus Sinestro is one of those classic confrontations, much like Spider-Man and Doctor Octopus, Batman versus the Joker, Superman confronting Lex Luthor, and The Fantastic Four battling Doctor Doom. It just doesn’t get much better than this.

Venditti starts by putting Hal at one of the lowest places he could possibly be – Regaining his ring to find the Sinestro Corps in charge of the universe, his fellow GLs missing, and Sinestro himself recharged by Parallax’s power. Of course, Hal is ready to take on his red-faced nemesis all by himself. Now that’s courage!

The writing has been crisp and fast-paced, with surprises aplenty along the way. A favorite is when everyone’s saying a Green Lantern has been captured, and everyone (including us) assumes it’s Hal they’re talking about. Well, Venditti had a big surprise in store for us! That’s the kind of scripting I love, so I’ve enjoyed this comic.

Flash forward (sorry, couldn’t help that) to this issue, and we see the battle of the century that is a huge payoff to the build-up the last six issues have been heading towards. Action, you bet! Suspense, definitely! A satisfying conclusion, completely, but Venditti even left some threads that will lead into the next story. Nicely done!

Hal fans will be thrilled because this is our hero as he’s liked best – kicking butt and taking names. I’m reminded of that wonderful line about Batman once said in Justice League Unlimited: “Is there anything you can’t do?” Well, when it comes to being a Green Lantern, Hal’s the guy to back!

POWERFUL ART THAT TELLS THE STORY

I always like to say that in comics, you have an unlimited special effects budget. And the art in this issue really backs that up! A variety of panel sizes helps up the action, and I couldn’t get through the panels fast enough to turn the page and see what was going to happen next!

I also loved the expressions on the various faces, even the aliens! Well done!

If you’re a fan of the GL Corps and you haven’t been reading this title, you certainly should be. A new tale will begin in the next issue. If you’ve missed this wonderful story, you might check at your local shops or find digital copies. I think you’ll really enjoy it.

In my opinion, this will go down as one of the classic Corps stories of all time. It takes Hal and Sinestro to the edges of their interaction, and I loved it! I imagine Mr. Venditti and company already have more surprises in store for us readers, so I can’t wait!

A conclusion to satisfy the Hal fans among us!