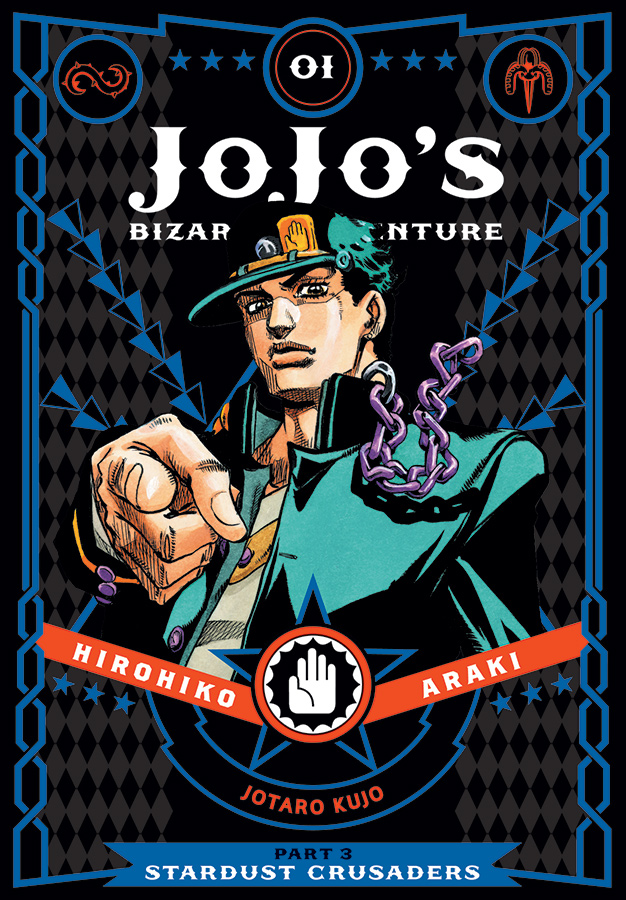 Created by Hirohiko Araki, JOJO’S BIZARRE ADVENTURE is a groundbreaking manga series famous for its outlandish characters, wild humor and frenetic battles. JOJO’S BIZARRE ADVENTURE: PART 3 – STARDUST CRUSADERS is the third story arc in the overall series and will be published in a deluxe, hardcover edition under the Shonen Jump imprint and is rated ‘T+’ for Older Teens. Volume 1 will carry a print MSRP of $19.99 U.S. / $22.99 CAN.

JOJO’S BIZARRE ADVENTURE: PART 3 – STARDUST CRUSADERS will also be available digitally from VIZ.com and the VIZ Manga App, as well as from the Nook, Kobo, Kindle, iBooks, comiXology, and GooglePlay stores. Future volumes of the series will be published on a quarterly basis.

JOJO’S BIZARRE ADVENTURE depicts the long-running, multi-generational adventures of a family of mighty heroes – the Joestars. As the STARDUST CRUSADERS arc opens, a fiendish villain once thought to be dead has resurfaced and become even more powerful! To fight this evil, the aging Joseph Joestar enlists the help of his hot-blooded grandson, Jotaro Joestar. Together they embark on a perilous adventure that will take them around the world!

“This is the story arc that propelled JOJO’S BIZARRE ADVENTURE to international fame,” says Urian Brown, Editor. “With the introduction of Tarot-themed Stands, ghostlike projections with fantastic powers that come from the characters’ bodies, the action in the story took on a whole new life. And now this fan favorite arc is collected in deluxe, hardcover editions complete with color pages. Read the first volume next month and find out how the series achieved the legendary status it has!”

Manga creator Hirohiko Araki made his manga debut in 1981 with the Wild West story, Busô Poker. He experimented with several genres, including mysteries (Mashonen B.T.) and action-horror (Baoh), before beginning JOJO’S BIZARRE ADVENTURE in 1986. Propelled by imaginative storylines, surreal imagery and individualistic artwork, JOJO’S BIZARRE ADVENTURE is one of the longest-running and most popular shonen manga ever released. Araki’s current works include a new series set in the JOJO’S universe, JoJolion.

For additional information on JOJO’S BIZARRE ADVENTURE and other manga titles distributed and published by VIZ Media, please visit www.VIZ.com.