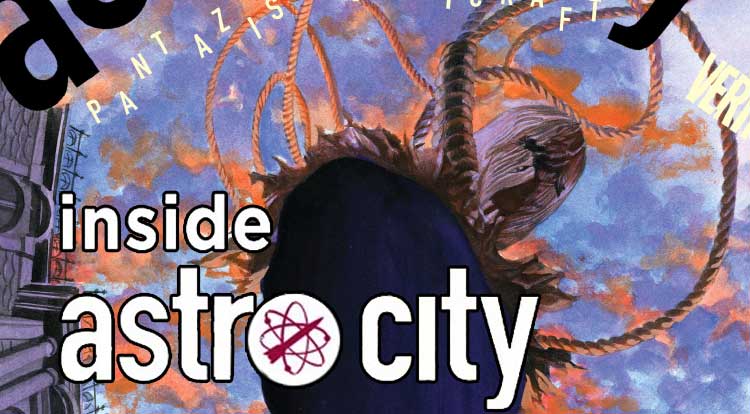 Inside Astro City #39 with Kurt Busiek

Welcome to Inside Astro City, a column focusing on the Vertigo Comics series Astro City from Kurt Busiek, Brent Anderson, and Alex Ross!  Each month, we’ll take a look at the current issue of the series, and ask series writer Kurt Busiek questions about the book.  This time around, we catch up with an old friend or two on Shadow Hill, with Inside Astro City #39!

Astro City #39: “In the 15th century, the Hanged Man made a promise.  Today, he needs a lawyer.  A look back in at Marta Dobrescu, and her life in Shadow Hill, Astro City’s occult enclave-a life dealing with ghosts, demons, family, romance, and other horrors.  And the Hanged Man won’t be her only new client, either.” MAJOR SPOILERS: This issue opens with what seems to be the origin of The Hanged Man, making me realize that I didn’t actually expect him to have one.  Did you have any reservations about revealing so much of the backstory of Astro City’s most mysterious protector?

KURT BUSIEK: Take another look — we didn’t reveal his origin at all.

We revealed a little bit about the mechanics of his history, as he “borrows” the hanged body of the Frenchman, but that wasn’t the first time he appeared — the crowd recognizes him, so he’s got a past history beyond that.  So that was a piece of his past and a look into how things work for him, but where he comes from, why he does what he does — and how he does it, even — these things remain a mystery.

I do have reservations about revealing his origin, but I always liked the idea of that scene, so I figured we could show it as a fragment of history without really giving much away. MS: I really enjoyed Carmen Carnero’s art, especially the care taken to make sure that Marta Dobrescu is clearly the same woman grown a few years older.  How was the collaboration different than with Brent Anderson or even previous guest-artists?

KB: It wasn’t all that different — Carmen did a wonderful job, and I hope she’ll be available to do more with us in the future — but basically, I wrote a script that I though would suit her strengths, and she sent layouts for feedback before doing the finished art.  Brent does that, too.  There was a bit of a difference, since Carmen’s in Spain, so all communication was done via e-mail rather than by phone, but the general thrust of it was similar.

As for Marta, Brent and Alex pitched in — Alex did a character design drawing to show how Marta would have aged (which was easy for him, since his original model for Marta is now 20 years older, too), and Brent weighed in on the early pages, doing things like showing a few structural tricks to how he drew Marta, or helping get the sense of Shadow Hill right.  Once shown those few bits of graphic approach, Carmen then nailed the likeness for the rest of the two-parter, and made Shadow Hill look just great.

So it was a terrific experience all around. MS: At the end of Marta’s first spotlight story, I found myself a little bit disappointed in her choice to stay home on Shadow Hill.  This issue shows that she didn’t give up on her law career after all, which is a very satisfying reveal, even 20 years later.  Was there any intent on your part to prove that the character made the “right” choice or am I completely projecting?

KB: When we did that first story, which won an Eisner for Best Single Issue of the year, I wanted to show that Marta wasn’t surrendering or retreating, she was simply choosing to live in a place where she could control her own destiny, rather than depending on the heroes to protect her.  Some readers saw that, others didn’t, and it made for a very interesting set of reactions, as people saw the story in interesting, valid, and very different ways.

Over the years, I got more of an idea of what he life would be like, so it was nice to get to show that. MS: Goscinny’s is presumably named for René Goscinny of Asterix fame. Is there a hidden signifance to this, or it it just a French restaurant?

KB: I think it first appeared in #6, when Samaritan and Winged Victory went on their first date.  It’s just a fancy French restaurant.  But maybe they do an excellent roast boar, and their sauces are positively magical… MS: Once again, we see Marta beginning her day, just as we did back in Vol. 1.  I went to my back issues to confirm that, yes, it is the same ritual that we saw before.  That sort of attention to detail is one of the things I love about Astro City, but is that seemingly effortless storytelling a lot of work for you as a writer?

KB: In that case, all I had to do was go back and look at the earlier story.  I wanted to show that the rituals of her life hadn’t changed, but she’d built a business, so showing that she starts off the morning the same way, but then we see her get to her office and see what she does now seemed like a good way to start the issue.

Sometimes, fitting everything together with established ASTRO CITY history involves a lot of research or invention, if I’m working with something that I’d hinted at in the past, or thrown out various details about but I don’t necessarily remember where.  Then I have to do things like build a timeline for Honor Guard membership, or something like that, and it can be a lot of work. (And I’ll admit, the folks at herocopia.com have made it easier, since they’ve done a masterful job indexing and organizing the data.)

But this one was pretty easy. MS: As always, what should we be on the lookout for when #40 (which I hope is called “The Party Of The Second Part”, if only for balance) hits the stands?

KB: As you know by now, it was indeed called “The Party of the Second Part.”  And we got more Marta, the Silver Agent, a look into the magical cosmos of ASTRO CITY, a world-threatening crisis, the Candlemen and preparation for the World Series.

Astro City #40: “Life on Shadow Hill gets a bit more complicated when Marta has to handle a contract matter between the Silver Adept and an extradimensional demigod! On the other hand, she gets to watch baseball with ghosts. Also featuring the Hanged Man.”