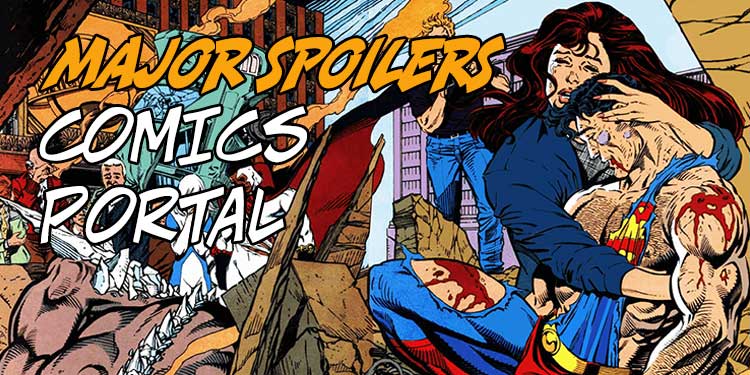 COMICS PORTAL: Bring Out Your Dead!

It’s a common phrase among comics’ fans – Death in comics is only temporary!

A lot has been happening that validates that saying, so since Halloween is only a week away and The Walking Dead’s premiere is only an hour or so away as I write this, I thought I’d set the stage for that holiday, as far as comics go! I’m not much for talking about the same thing each week in this column, but DC’s Rebirth is a perfect example of this. And I need only say one name: Wally West.

I remember Dan DiDio being asked by the same guy each DC panel they held during the San Diego Comic Con when the New 52 was first being discussed. Each panel that same person made it to the microphone and asked only one thing: “Why are you killing Wally West?” Even during the final discussion of the weekend, and after DiDio had said, “Please, no questions about Wally West!” that same guy got up there and once again asked about Mr. West. I came away from that understanding just how devoted Wally’s fans were and are!

So Rebirth hits the stands, and who’s at the center of it? None other than Wally West! (I hope that same guy bought this issue, for goodness sake!) And he’s playing a pivotal role in Rebirth as well, which I’m sure makes a lot of fans pretty happy!

I understood the reasoning behind holding Wally back. They wanted Barry Allen to shine as the Flash, and having more than one in a family of heroes can blur what some fans think of them. Also, it may be hard for some writers to come up with ways to keep all those people challenged. (Not Joshua Williamson, though, apparently!)

And it’s not like Wally is the only DC character to vanish and return. The pre-New 52 Superman, Lois and his son are now around after having faded away. Hey, even the New 52 Superman could come back at some point! Pa Kent is famous for the number of times he’s died and returned. Then Krypto has gone through all stages of being around and gone. He was even a raging white wolf in the New 52, but now he’s back, too!

Lest you think DC is alone in this, just take a glance at Marvel’s revisit of the Clone Saga in Spider-Man.

It feels like there’s a lot of hoops being jumped through, granted, but Gwen Stacey is back, and is that her father around as well? We’re also seeing a lot of Spidey’s rogues’ gallery being revived, which is making some fans wonder if the current folks in charge of that hero’s books are thinking killing off these folks was not as wise an idea as it seemed at the time. Or is it tough coming up with great Spidey villains these days? We’ll see. But it’s getting some attention, anyway!

WHY KILL A CHARACTER?

With all these returns happening, why in the world would you kill a character in the first place?

There are a few reasons I know of, but I’m not sure I buy any of them. First, you as a creative team have run out of ideas about how to tell stories about him or her. This happened with DC back in the day when it was decided that the Flash was simply too powerful. The Fastest Man Alive simply couldn’t be challenged by many adversaries, so they decided to kill him and replace him with the aforementioned Wally West, who had experienced a serious power downgrade to make him more relatable (read, easier to write). Now, of course, that hero is not only flying high in his comic, but he has a show on The CW that’s on the top of the popularity list on that network. Sheesh!

Second, something about the person is outdated. For example, you think Vibe is too stereotypical and offensive, so you off him. (For how you can handle him correctly, see the previously mentioned CW show.) It makes your life easier, but it can cause you to lose ground with certain fan groups you’d often like to keep buying your product.

Third, your family of heroes is bloated. During a DC panel in Baltimore Comic Con, I once asked Dan DiDio why he was always trying to get rid of Dick Grayson. His response was that he understands the need for Batman, and also Robin, but more than that, he can’t understand. Never mind Batgirl, Nightwing, Red Robin, Batwoman and the rest of the group, who all seem to have devoted followings. Apparently, though, after Grayson, DC is happy to see Nightwing back on the stands, although I thought the former comic wasn’t bad. I hope it sticks this time!

Fourth, sales. Yes, when a hero dies, you can get more people buying the comic that happens in. The bad news is that you might get a bump in sales, but it’s only temporary at best. Then what do you do in a few months when that bump has faded, kill another character? You’ll run out of heroes eventually if you do that!

HOW DO YOU DEAL WITH YOUR FAVORITE CHARACTER DYING?

I know this won’t sit well with some folks, but if your hero ends up in the grave, my advice is: Be patient. Take a look at Hal Jordan, for instance. He went bad, died, became the Spectre, then came back again. Of course, this leads to something else you can do as a fan: Don’t be too loud, but maintain a presence that shows there are fans who will buy comics with him or her.

My brother was a part of H.E.A.T. (Hal’s Emerald Action or Attack Team, among other names), and they set up an email chain that they used to keep in touch with each other. At one point, they took out a full-page ad. Most of them weren’t angry or abusive – They simply wanted their hero back, and they calmly let people at DC know that. It took some time, but it happened. Also, they weren’t the only group or person involved in making that happen, but they did encourage a lot of people to get involved in bringing Hal back.

There’s an interesting phenomenon going on out on Facebook. Groups are being set up for fans to share their love of certain comics characters. The one I think that works the best is the Hawkman/Hawkwoman group run by Tim Board. On any given day, he posts excellent artwork featuring those heroes, shares news about them (such as the Death of Hawkman miniseries), and generally keep interest in the Hawks alive and well. If you like those characters, I invite you to check that group out! Maybe if you like a different hero, you might set up a group like he’s done?

As I mentioned, next Monday will be Halloween, and this Saturday will find a lot of local comics shops hosting their own Halloween Comic Fest celebrations. It’s a great time to make friends and get free comics! Yes, it’s something like Free Comic Book Day (regularly held the first Saturday in May), and it’s trying to help bring more younger readers into the fold. For more information, you can go to this link or check with your local store to see if they’re hosting anything you’d enjoy attending. We don’t want to see the comics industry die, do we?

What do you think? If a character dies, should he or she stay dead? Or if there’s enough demand, should that person be brought back? Please share your thoughts in the space below!