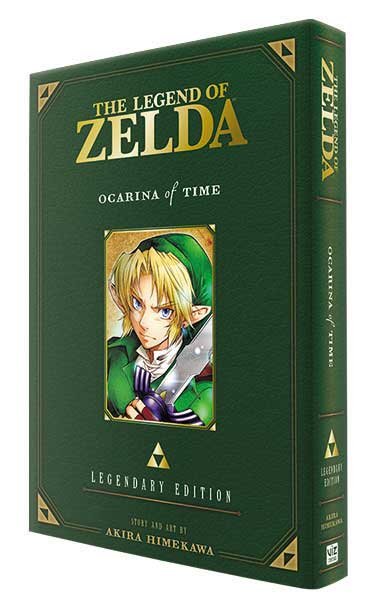 THE LEGEND OF ZELDA: LEGENDARY EDITION adapts the 10-volume manga series based on the classic Nintendo® role playing, puzzle-solving, action video game into a line of deluxe omnibus 2-in-1 releases. Each release features stunning new covers and color illustrations by creator Akira Himekawa. THE LEGEND OF ZELDA: LEGENDARY EDITION – OCARINA OF TIME, Vol. 1 is rated ‘A’ for All Ages and carries a print MSRP of $17.99 U.S. / $21.99 CAN. Future omnibus volumes will be released in print three times a year.

The battle for Hyrule and the Sacred Realm has begun! A young boy named Link must defeat evil on his long, perilous quest to find the spiritual stones that hold the key to the Triforce, and deliver them to Zelda, princess of the land of Hyrule. In the opening volume of the LEGENDARY EDITION, young Link embarks on a perilous quest to find three spiritual stones that hold the key to the Triforce, the wielder of which will rule the world! Link’s plan is to deliver the stones to the Princess of the mystical land of Hyrule, Zelda. But obstacles abound and his long journey has only just begun!

“THE LEGEND OF ZELDA: LEGENDARY EDITION is the ultimate edition for fans and new readers alike,” says Joel Enos, Editor. “For the entire run of this edition we’ll have new material, including some sketches and character designs, some new stories for the first time in English, and other small editorial things we took special care with that we hope fans will appreciate.”

The LEGEND OF ZELDA manga series was created by Akira Himekawa, which is the pen name of two women known simply as A. Honda and S. Nagano. The pair created The Legend of Zelda manga series which was inspired by several games and story arcs in the Zelda video game series.