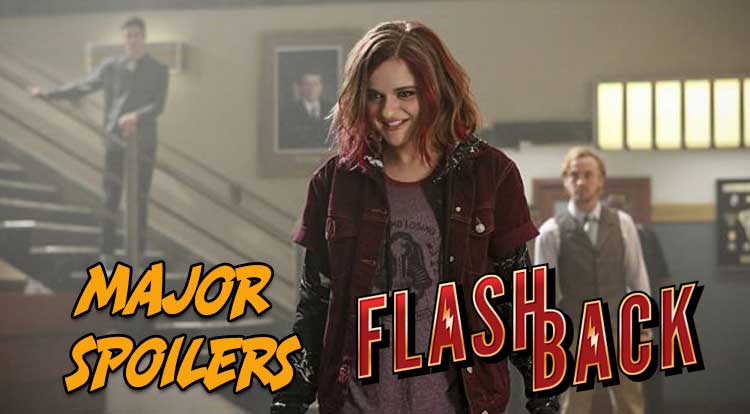 Jesse Quick takes the spotlight this week as Harrison and Jesse make a visit from Earth-2. But who is Magenta, and why is Dr. Wells so concerned about his daughter’s secret life as a speedster?

MAGENTA
Barry and Team Flash are thrilled to reunite with Earth-2 Wells and Jesse (guest star Violet Beane). Wells confides to Barry and Caitlin that Jesse has all the powers of a speedster and has been saving people on his Earth, but he’s concerned about her safety and wants them to talk her out of using her powers. Meanwhile, Magenta, (gues star Joey King) a new meta who can control metal, terrorizes the city. This week we finally got to see Jesse Wells not only get her powers, but also get her costume and her speedster name put into proper context.  Though it has been a long time coming to the television series, Jesse Quick has also had a bunch of changes in comics over the years.

Jesse Chambers is the daughter of Golden Age heroes Johnny (Chambers) Quick and Liberty Belle. She first appeared in Justice Society of America #1 in August 1992, and was created by Len Strazewski and Mike Parobeck.

She’s had a lot of costume changes over the years…

Harry Wells would probably be very happy with the comic book version of his daughter. Initially, Jesse didn’t want to be a hero, instead at a young age, she began devoting her life to studying superheroes of the past and present until she was forced to become a hero during the Savitar storyline.

As we’ve discussed in the Flashback podcast and in other places, it seems stress is a triggering device for many meta-humans in order for their powers to get a jumpstart. Interestingly, the Dominators – a race of butt ugly aliens who wanted to destroy all meta-humans on Earth – also believed that the metagene was activated in times of great stress. We discussed Invasion! on the Major Spoilers Podcast a couple of weeks ago. Since we know the Dominators are going to be part of the big four-part crossover on The CW, I wonder if this little bit of exposition between Jesse and Wally is laying the groundwork for things to come later this season. With Wally wanting his powers, and knowing the Dominators are willing to put humans in front of a firing squad, I can’t help but think we’ll see Kid Flash appear during the invasion arc. Of course I thought the Crisis on Infinite Earths #7 homage to Supergirl’s death wouldn’t happen until later in the season, but apparently Berlanti and company just couldn’t hold it in. The big bad this week is Frances “Frankie” Kane, a meta-human who has the ability to control metal. Her magenta highlights and glowing eyes probably had a role in her villain name, and is in no way connected to Magneto over at Marvel.  Magenta first appeared in The New Teen Titans #17 in March, 1982.  In the issue, we learn that Frankie has a childhood connection to Wally (Kid Flash) West, and he is instrumental in helping her get control of her powers.

This is one thing that I really like about The Flash – or more importantly, the Wally West version of The Flash; he has a way of convincing long time villains to turn to the light. It’s something the television creators are trying to force into Barry Allen, but it really was more of a Wally thing in the comics. For a while, Wally and Frankie were an item, but as often happens when you breakup with a powered person, a super-villain is created.

Then of course the universe changed (again), which meant a new version of Magenta needed to arrive on the scene, and in Flash Vol 2 #170, Frankie Kane appeared once again in her new form. And because we can’t let Marv Wolfman and George Perez get all the credit that they deserve, the new version of Magenta was created by… Scott Kollins… and… Geoff Johns.

I didn’t find any reference to John and Karen James in the DC Comics history books, but Peter Flemming, who played Frankie’s abusive father in this episode, also appeared in Smallville in 2007.

I know everyone is dead set on revealing that Doctor Alchemy is really Tom Felton. It’s a great idea, and you might be totally right, but I have another Crazy Conspiracy theory that I would be very tickled if it came true.

The first episode of the season was called Flashpoint. The second episode was called Paradox. The two together created the title of the animated movie based on DC Comics’ Flashpoint event.

Magenta is revealed to have a split personality; a good side and a bad side.

Harry tells his daughter that she is fast enough to be a speedster. Fast Enough was also the title of the Season 1 finale. And as mentioned in a previous Flashback feature, we are seeing a bit of Ring Theory happening this season – essentially story elements coming around for a second time.

What do these three items have in comment? That’s right, Dear Reader – TWO!

So what does two have to do with Doctor Alchemy?

As I shared with you last week, Doctor Alchemy was initially known as Mister Element (aka Albert Desmond), BUT, it was his identical twin brother, Alvin who became the big bad once Albert decided to become a good guy. So, perhaps Doctor Alchemy is Tom Felton under the mask, but instead of CSI Julian Albert, it is really Tom Felton playing the twin brother!

If Julian Albert isn’t Doctor Alchemy, why is he such a dick to Barry?

Oh, why indeed.  Remember, Eobard Thawne told Barry that he made a few tweaks to the timeline to shake things up for the speedster, but what if he isn’t the only time traveler to vex The Flash? What if Julian Albert isn’t only the twin brother of Doctor Alchemy, but he is also Abra Kadabra? Crazy? Maybe, but it is these crazy theories that keep me glued to my television each week.

And that should be everything! What did I miss? What did you catch? Use the comment section below to share your thoughts on this episode, and until next week – RUN, JESSE! RUN!