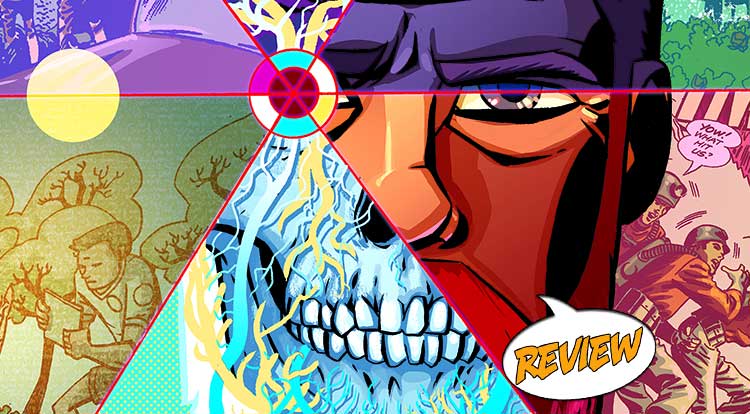 The third title from DC’s Young Animal imprint makes the scene today, featuring an old-school DC hero that many of us have never ever heard of!  Your Major Spoilers review of Cave Carson Has A Cybernetic Eye #1 awaits!

Previously in Cave Carson Has A Cybernetic Eye: Appearing in only a handful of tales in the Silver Age of Comics, Cave Carson and his underground drilling machine enjoyed adventures far below the surface of the earth, accompanied by Bulldozer Smith, Johnny Blake, and Christie Madison.  For many years, he dropped out of sight entirely, returning as a member of the Forgotten Heroes (with Animal Man, Rip Hunter, and others who eventually made their way back into the spotlight) before retreating into “Big Crossover Cameo” mode, as so many of DC’s minor characters do.  Now, he’s back in his own solo title for the first time since 1964…

Many times, when the Big Two bring back an old-school character, I’m one of the hipsters intoning how cool she used to be back in 1960-whatever.  That’s not the case with Cave Carson, whom I’m only familiar with from a two-issue stint in the Forgotten Heroes when I was in middle school.  Fortunately, that’s not a problem for me as a new reader, as this issue brings me up to speed quickly: We open with Cave remembering his past as underground adventurer, only to have things turn into a disturbing nightmare scenario hallucination, seemingly thanks to his new cybernetic eye.  Worse still, this happens at the funeral of his wife Eileen, a tragic loss that Cave was powerless to prevent.  The creators show us his awkward interactions with his daughter, Chloe, and the troubles he has at EBX, the corporation from whom he “liberated” his Mighty Mole in the first place.  Cave’s situation is perfectly understandable and approachable, until an under-dweller arrives at his door, morphs into a tentacle monster and tries to kill him…

I won’t be the first to say it, nor do I expect to be the last, but the entire Young Animal line is channeling the Vertigo Comics of the 1990s in all the right ways, and this book will evoke memories of the old days of Morrison’s Doom Patrol, Milligan’s Shade and the (you should excuse the expression) salad days of Swamp Thing.  There’s clearly something going on here, as EBX is building a new, more powerful Mighty Mole and training a paramilitary squad for some sort of sortie, while Cave’s new ocular implant remains a mystery.  (Doc Magnus appears in these pages, one of quite a few cameos that make me happy, trying to troubleshoot it, but Cave is mum on how he got the damn thing.)  This issue also features a number of backup strips, assembled to resemble a Sunday newspaper comic section, including a beautiful and charming Windsor McKay tribute starring Zan and Jayna, the Wonder Twins.  The script for this issue is tight, and even though there are big mysteries in play, it doesn’t feel like a ‘Lost’ style tease of madness, instead giving us a focused story of a man at a crossroads.

Oh, and the last page teases a return of Wild Dog, so I’d be back next issue even if it sucked…

Fortunately, this issue doesn’t suck, so I don’t have to worry about such frippery, as Cave Carson Has A Cybernetic Eye #1 ends up being a great first issue in both art and story, making me wonder how hard it is to track down the character’s previous appearances, earning a buy-on-sight 4.5 out of 5 stars overall.  I’m not sure where the plot is going to take Cave, but in the hands of these creators, we’re clearly in for an adventure regardless of destination…

CAVE CARSON HAS A CYBERNETIC EYE #1

Lays out an intriguing mystery with an engaging protagonist and gorgeous Oeming art. This one's a winner.