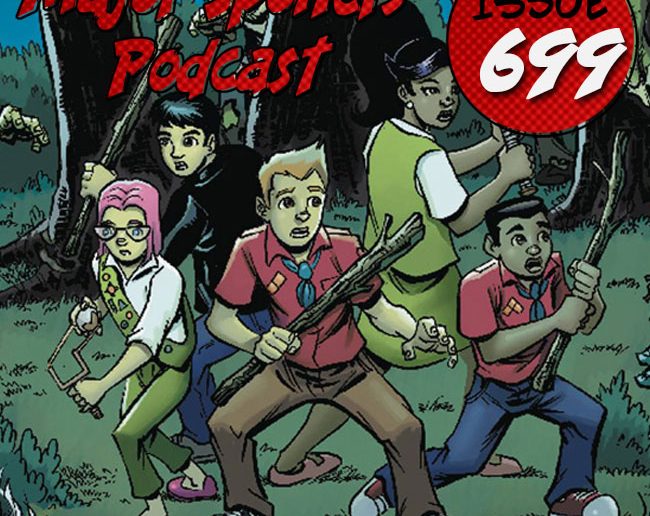 REVIEWS
STEPHEN
Batman: Return of the Caped Crusaders
Batman and Robin, the boy wonder,swing into action when the earth is threatened by Gotham City’s most malevolent master-criminals, Joker, Riddler, Penguin and Catwoman! The Dynamic Duo try to save the day when Batman is turned from good to bad. Now Catwoman and Robin must team up to stop him from taking over Gotham City and ultimately, the world.

MATTHEW
DOOM PATROL #2
Writer: Gerard Way
Artist: Nick Derington
Cover Price: $3.99
What happened to Larry Trainor? The hero known as Negative Man is still out there, but he’s not exactly the same guy he was back when Doom Patrol was still together. Like a Russian doll, there is man inside the man, and who knows how many other men inside of them, with the guy on top possessing a mind for mischief that incites violence.

RODRIGO
NIGHT’S DOMINION #2
Writer/Artist: Ted Naifeh
Cover Price: $3.99
When she’s not working as a barmaid, Emerane becomes the Night, the most wanted thief in Umber. But when the Furie, Umber’s self-proclaimed champion, declares himself her enemy, she’s soon penniless and desperate. Her only recourse is to join the Bard and his ragtag team of rogues as they infiltrate the Cult of Uhlume’s tower in search of untold riches. The tower is not as it seems, however, and our heroes—if we dare call them such—may find more than they bargained for in its murky depths.

Poll of the Week: British Invasion

DISCUSSION
GHOUL SCOUTS VOLUME 1
Writer(s): Steve Bryant
Artist(s): Mark Stegbauer, Jason Millet
Something stranger than usual haunts Full Moon Hollow, Paranormal Capital of the World. Adults either can’t see it, can’t remember it, or go crazy from it. So when a zombie outbreak threatens the town, only a group of misfit scouts can save it! Collects the fan-favorite miniseries. Be prepared. Be very prepared.