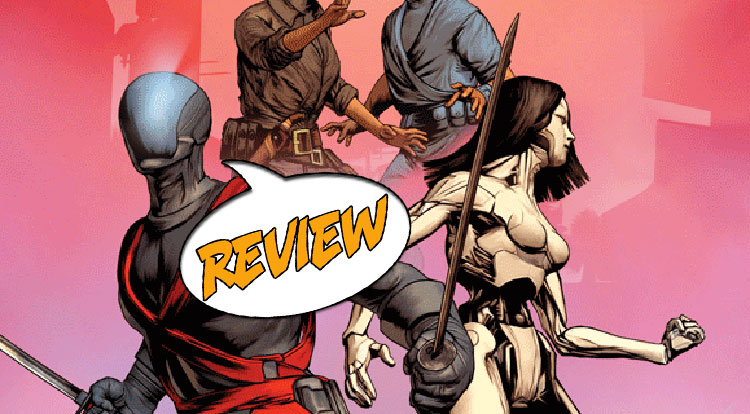 A book that revolves around the discussion of race in a futuristic society, with prejudices fixed more in the present than in time to come, at least they have A.I. to blame it all on… Previously In Symmetry: Humanity has entered Utopia where life is controlled and perfect. All labour is performed by Robotic servants and society is organized by a benevolent A.I. All medicine, nutrition and emotion is carefully regulated and balanced, people are kept in a state of permanent segregation from anything dangerous, including each other. That was until an unexpected solar event caused several humans to be removed from the system and they discovered that other races existed on this planet.

Stepping on ground I am not entirely comfortable with

Comics have always had a place in pointing out the inequalities of our present society. From the first female super heroes, to the first leading black heroes, writers have tried to give voice to the voiceless and shine a light on areas of life that your ‘average’ comic reader would not have seen. I tend to steer clear of these sorts of comics for review like the plague, not because I don’t want to write about them, but because what right does a fat, middle-aged, privately educated white guy have to comment on something I so patently have no clue about.

My constant worry when even thinking about these subjects is that I will say something I think is totally innocent but that is horribly offensive or I will make comparisons with my own experiences that are so wide of the mark as to be laughable. I was bullied as a kid because I was a nerd, most people my age with my interests will have experienced a similar thing, but for you youngsters today remember this, comics weren’t always cool. However when I start even thinking ‘I understand racism because I experienced prejudice as a child being picked on by rich kids who thought crap was a terrible swear word;’ well you can see how hard it is for me to empathize and not look like an idiot. I can understand what real prejudice is like about as much as I can understand what living in the Stone Age was like because I went camping once.

Why the heck did I pick this book?

I wish I could say I wanted to get into a really tough book that opened by eyes to other people’s opinions and try to understand the inequities of the world a bit better. However in reality, I picked this because I really liked the cover. If I wanted to challenge myself I would have reviewed a comic like Black, where only black superheroes exist, or for that matter, Luke Cage’s Netflix series, which has been raising a storm with its repeated use/ not use of the N word.

The first page of this comic made me shiver as three identical looking middle-aged white women with steel grey hair discuss how they sent a young white man to his death. It made me very uncomfortable I have to say. I have been used to being the ‘bad guys’ in films, as a British person I see my accent as the villain in about 80% of movies I see, but to see my ‘colour’ as that, is quite another thing.

As I read further it turned out that it was not just a ‘white bad, other good’ because the elders of all races were in on the same scheme, one of segregation and privilege, of knowledge that the masses did not possess. It changed from a commentary on race into one of breaking with society, something that could not be more current with anti-establishment political groups in full swing on both sides of the Atlantic.

Write a comic or a social commentary, having one after the other cheapens both

As I came to the end of the book, which also turned out to be the end of the current series, my opinion of the comic changed dramatically. It ended with a Matrix Reloaded style view of the cycle of life and rebirth after rebirth, and that was satisfying enough. What ruined it was four pages of social diatribe from the writer. There is a famous quote from Tolkien first published in Lord of the Rings and I will repeat it here in full because it sums up my thoughts perfectly.

“I cordially dislike allegory in all its manifestations, and always have done so since I grew old and wary enough to detect its presence. I much prefer history – true or feigned– with its varied applicability to the thought and experience of readers. I think that many confuse applicability with allegory, but the one resides in the freedom of the reader, and the other in the purposed domination of the author.” (J.R.R. Tolkien)

At the end of the book, I had drawn my own conclusions, buy the end of those four pages, I hated that had all been taken away from me. Whether I agreed with the writer or not (and ironically I agreed with pretty much all he wrote) was completely irrelevant. A story should stand on its own, each writer has thousands of inputs that shape how a story goes, but you should never railroad a reader with your own opinion. If someone takes something away from your writing, whether you intend it or not, that is theirs to keep; to then try and tell them what they thought was wrong, spoils everything a good story should do.