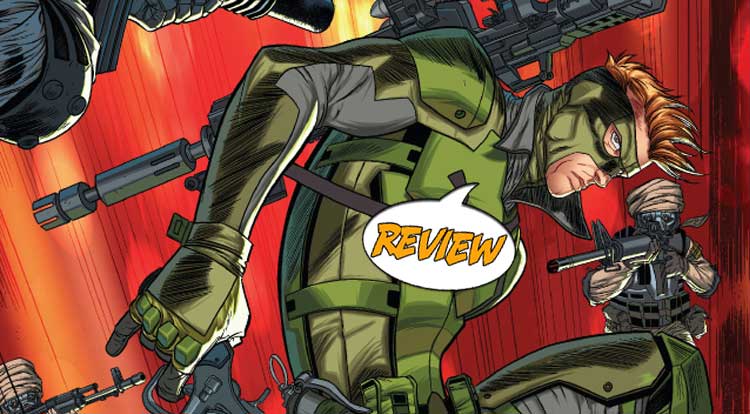 He’s been working with the Mercs For Moneym under ramrod Deadpool, but now the anti- terror mercenary is about to go (you should excuse the expression) solo.  Your Major Spoilers review of Solo #1 awaits! Previously in Solo: “The ‘One Man War on Terror’ will get the job done! That’s right, James Bourne, A.K.A. Solo, is on his own, right where he belongs! Deadly alien weapons are making their way into the hands of ordinary thugs, and Solo is going undercover to locate the source. Things are heating up, and Solo might just wish he had some backup! Deadpool was just the beginning. You haven’t seen anything till you’ve met Solo!”

So, here’s the deal with Solo: He has no powers, he is a master of armed and hand-to-hand combat, he can teleport short distances, and he is apparently named “James Bourne.”  During the Civil War, he opposed registration, then registered, and since the events of the Secret Wars, he has been running with Deadpool’s loose team, The Mercs For Money.  This issue opens with Dum Dum Dugan (who may or may not be an LMD now, I’m not clear on his continuity) requesting that his SHIELD underlings get him someone from the “Red File” a group of operatives who washed out of training.  At the same time, Solo is breaking into one of the Mad Thinker’s lairs to capture a package for a man named Ansel, whom he doesn’t particularly trust.  As he goes, he’s on speakerphone with his wife and/or girlfriend, who is busy taking care of their child.  The op goes sour, but Solo manages to capture the prize (Ansel’s dog, somehow in the clutches of the Thinker) and then gets scooped up by Dum Dum Dugan, who wants to offer him a job…

…because he’s totally expendable.  I have to say, I like Solo, sort of, but this issue doesn’t really do anything that cements him for me as an exciting new character.  In action, he comes off much like Deadpool, a feckless guy who has some skills and abilities and a smart mouth.  His family is an interesting complication, but that again doesn’t really define him as someone whom we’re all rushing out to read more about.  This book’s spin-off status makes me wonder if there’s setup in the Mercs For Money book that makes Solo the hot new character find of 2016, but I’m not really feeling it in the story as written.  From the art side, this book looks quite nice, with some wobbly moments in terms of proportion (Dum Dum Dugan is about 8 feet tall, while facial expressions are wild and cartoonish throughout), but Paco Diaz delivers on impressive looking hardware, which is important in a book featuring this many guns.  My biggest complaint is that this feels like a slightly more tongue-in-cheek Punisher, a concept that doesn’t quite gel in a meaningful way.

That said, if you’re all about Solo or just love that Deadpool mercenary quippy action, this may be the book for you, and there’s enough potential here that I’m not disappointed in the book.  I’m just not immediately impressed, which means that Solo #1 ends up feeling a bit listless throughout, earning a still better-than-average 2.5 out of 5 stars overall.  I’ll be watching this one to see if it really catches fire like some previous Duggan stories, but right now there’s not enough to make Solo a unique voice for my tastes…

An okay comic, but nothing particularly special. Not sure it would have been greenlit without the Deadpool connection...