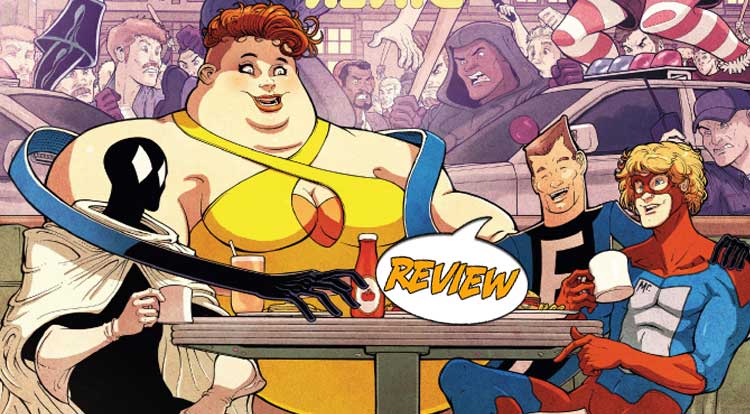 They’re not the greatest heroes the world has ever known, but they may be the heroes we deserve. Previously in Great Lakes Avengers: 1989 was a weird year for comic books.  When John Byrne took over the reigns of ‘West Coast Avengers’, the first thing he did was bounce founder and team leader Hawkeye out (by government fiat), replacing him with the U.S. Agent.  For his part, Hawkeye didn’t go quietly into that good night, instead hooking up with a group of young, inexperienced heroes and working to forge them into a fighting force equal to the Avengers.

THE WORM TURNS, THANKS TO COPYRIGHT LAW

This issue opens with Connie Ferrari, legal counsel for The Avengers, receiving some bad news: Thanks to a snafu on the part of Tony Stark, the team temporarily lost their ownership of the trademark for the team’s name.  As such, the mark was awarded to the only other person who ever TRIED to copyright it, Dr. Val Ventura, Flatman of the Great Lakes Avengers.  Cut to Val’s apartment in Milwaukee, where the former hero has fallen upon lean times: His team has fallen apart, the majority of them are dead (although two of them have come back from that, it should be noted) and he doesn’t have the resources to be a hero any longer.

Or at least, he used to, before Connie negotiated the rights back, giving him a payout and the ability to once again call his team Avengers!  He manages to round up Big Bertha and Doorman, but Squirrel Girl is busy with the upper-tier Avengers, while Mr. Immortal isn’t answering his texts.  Of course, there are other forces at play that may bring new heroes into the GLA fold…

I’ll tell you, I’ve long been a proponent of comedic superheroes are a regular thing, so I was stoked to see the GLA returning.  Thanks to Deadpool (and likely the smaller talent pool from not wanting to use the X-Men, who comprise 40% of their intellectual property), editorial has been taking chances on the more peculiar denizens of the 616.  This issue brings the funny, with clever dialogue throughout (even in the mouths of villains like Shriek), some really ingenious plotting moments and a nice use of the peculiarities of the characters.  Big Bertha seems to no longer shift size, which I hope is permanent, and Flatman is genre-savvy enough to know that he’s seen as Reed Richards generic equivalent, giving me hope that this creative team is self-aware enough to make the characters work.  I really like Will Robson’s art in these pages, and respect the decision not to jettison the most problematic aspects of the characters’ 1989 designs immediately.  His take on Bertha is particularly nice, keeping the idea of an overweight superhero but not making her grotesquely hideous as well.  The biggest question raised by this issue, though, is how well new characters will fit into the group dynamic and if they’ll stick around for the long haul.

THE BOTTOM LINE: A LIKEABLE START

Long story short?  This issue feels like it could be the beginning of mainstreaming the GLA, assuming that enough people actually read it and the book doesn’t get prematurely cancelled based on the expectation that it’s going to be.  Great Lakes Avengers #1 takes the difficult task of making fun stories out of characters that literally nobody respects, and has fun with the premise, with attractive art throughout, earning 4 out 5 stars overall.  I recommend this book, Spoilerites, not just because it needs to be an ongoing thing, but because it’s a fun read in a sea of badass avengers of night, something we can all agree to needing more of…

I don't know if it'll make these guys less of an internet target, but it's a well-written, well-drawn, engaging first issue, and I want more GLA.