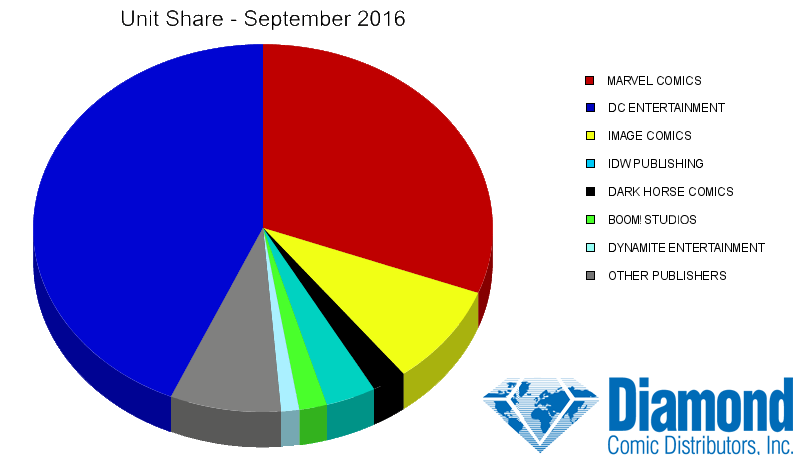 Diamond Comic Distributors has announced DC Comics took the top spot once again in September for comics released in the direct market. Is this the sign of a major market change, or is the apocalypse upon us all!?

DC Comics had eight titles in the top ten including All-Star Batman #2, Batman #7, and Supergirl #1. Marvel didn’t go down without a fight though, as Civil War II #5 landed in the number four slot, while Image Comics – IMAGE COMICS – made it to the top ten with The Walking Dead #158.

We will have the complete list on Monday, but the one thing everyone is most interested in is how well the entire industry did compared to last month’s record breaking run. Sadly, compared to August 2016, overall comic sales dropped 20% in the number of issues sold, and saw a nearly 24% drop in dollar sales.  Still compared to September of 2015, sales were still up by 15.61% in issues sold and 9.23% in the dollar category.

Is there any reason why comic sales would drop overall? While August is typically the time of year when kids and adults head back to school, many don’t start until the end of the month, with September being the first full month of scholarly pursuits.  It wouldn’t surprise me if school activities, and shifting funds going to school isn’t partly to blame for the slump in sales.

Overall, comics sales for the year are still up – barely – with a 1.59% rise compared to last year.

What are your reactions to this data? Is this the normal ebb and flow of the year, or do you see doom and gloom in the numbers? Use the comment section below to share your thoughts.