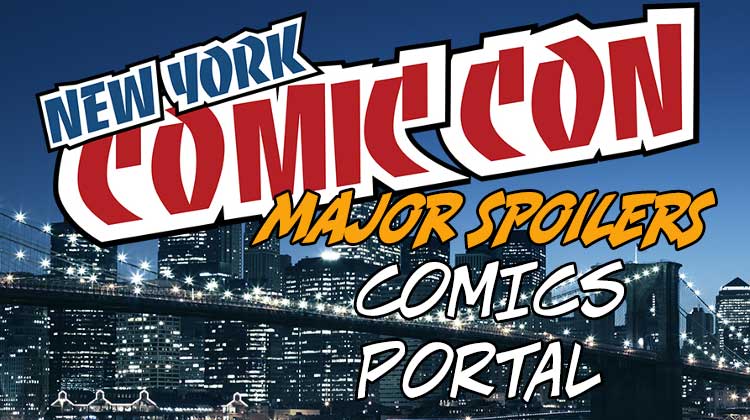 Comics conventions are everywhere these days, often with more than one happening each weekend in the U.S.

This past weekend, the New York Comic Con was held, and for the first time that I can remember, it’s presence was noticed in the community around it. That’s something new!

It makes me wonder if, on some levels, comics are TOO popular now!

FIRST, HOW WAS NYCC?

New York Comic Con only seems to get bigger and bigger every year. I still think they’ve done a good job of balancing media stars/shows with comics, much better than San Diego CC has.

It would be impossible for me to mention all the guests at NYCC! As I did last year, I spent a lot of time at the DC Comics booth, but spent time with Valiant Entertainment and other excellent creators. Look for my article on Ninjak Vs. The Valiant Universe, coming soon!

All four days, from Thursday, October 6, through Sunday, October 9, were literally packed with fans and other attendees! All tickets were sold out for the entire event, which probably explains why there were so many folks there!

There were a lot of diverse comics in the Indie Comics area, more than I’ve ever seen before! That’s a good sign, in my opinion.

One thing similar to San Diego was the lines! Long, long, intertwining lines! It sure seemed to force people to choose what they wanted most since they couldn’t do everything. Also, some events started being held outside the Javits Convention Center, something San Diego has been doing for years.

I look forward to this becoming an even bigger fan gathering each year. Count on it!

WHY COMICS MAY BE TOO BIG As I said, NYCC was bursting at the seams, with fans and others crowding the con all four days. People came in from the local community as well as all over the country. This convention has quite the reputation for drawing in a huge audience as well as exhibits in one place that you might have trouble finding elsewhere.

You can also find many t-shirts and other comics-related items in your local Wal-Marts and other stores. In fact, on our trip back from New York, my roommate and I discovered a store chain we’d never heard of before. It’s called 2nd & Charles, and they had a lot of materials we’d never encountered previously. There were Pops galore, comics, books and other items that took us a while to sort through. They have stores all over the country, and I can guarantee that won’t be the last time we’ll visit a 2nd & Charles.

I just finished watching the first episode of the new season of Supergirl, now on The CW. In the 8:00 p.m. slot from Monday through Thursday, you can see a DC Comics-related show. ABC and Netflix have Marvel-inspired shows as well, and I hear other companies may have their wares on display on broadcast stations, not to mention Valiant’s previously mentioned digital-first series.

Never mind the many movies based on comics, with Doctor Strange mystically arriving in theaters very soon.

Comics-related properties are considered commonplace and well-known. Geeks rules the world! I mean, how much bigger can these comics-related things get? Have we reached the pinnacle?

WHY THEY’RE NOT BIG ENOUGH On the other hand, comics really could use more attention and support.

In their heyday, issues of comics often sold over 2 million copies. Now, if a book passes the 100,000 mark, that’s rare and news-worthy. Granted, back in those days, TV was just beginning, and games used cardboard playing boards with little pieces on them rather than today’s videogame consoles.

Comics shops are often to be found in many communities, but they can be found struggling to keep their doors open. They have to work to know their regular customers well, then keep those same people happy! There aren’t nearly enough other people on the lookout for these stores as there could be, in my opinion.

I wish more shops would piggy-back onto movie releases, maybe getting permission from local theaters to hand out flyers for their shops or even sell books there while people are excited about the film. I also wonder out loud why DC and Marvel don’t advertise their wares with trailers or commercials during movies or TV shows. In my opinion, that’s low-hanging fruit!

There are many more comics properties that could become TV shows or movies, so I don’t think we’re reached the end of that yet … not nearly!

I fret over the industry a lot, wondering what it will take to keep it moving forward as well as even surviving!

I think it’s important to keep the various levels of comics going, from the local store to the companies the ideas come from to the TV shows and movies. I’d really hate for this to be the “golden age” of comics, only to have it all vanish into the ether in a few years.

I know I say this a lot, but it bears repeating – Support the industry! Buy and share with others about the books you love! Watch the shows! Go to the movies!

I really want comics to move forward, to advance rather than fade away. I’m convinced that the only way that can happen is if we as fans, at least as many  of us as possible, take it upon ourselves to be “ambassadors” for comics. I mean, if all the people who walked the halls of NYCC this weekend spread out into their communities and shared the word about comics, well, I probably wouldn’t worry so much! Instead, many go home and hide what they bought in their closets or other hidey-holes. That’s fine, but share your passion, too!

To find out more about the New York Comic Con, you can go to their website at this link! They certainly will be back next year, so check out their site in the days and months ahead!