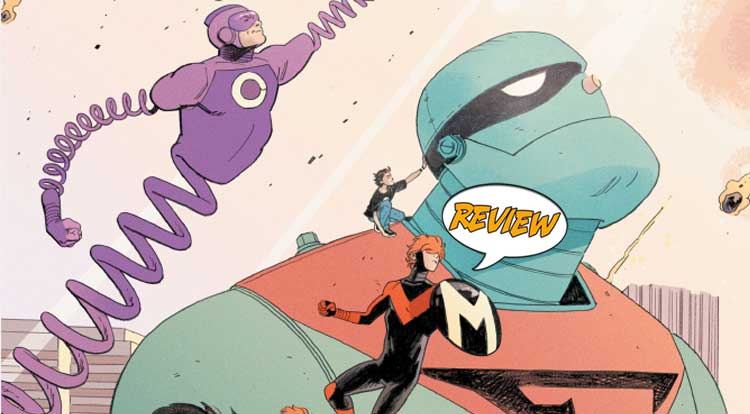 More heroes join the fight, but Omnikron has already made its way to Earth…  Is it too late to save the universe?  Your Major Spoilers review of Future Quest #5 awaits!

Previously in Future Quest: “Team Quest is dealt a serious blow at the hands of FEAR just as Omnikron starts rebuilding itself on Earth—out of anything living that comes too close! Inter-Nation’s Deva Sumadi takes charge and splits the group up to go recruit more forces to take on the alien super creature. It’s time to go on tour with The Impossibles and meet the biggest fighting force in the world, Frankenstein, Jr.!”

THE WHEEL OF HISTORY

We open in the Sea of Japan, as a fully loaded cargo ship encounters a strange whirlpool.  The panicked crew looks over the side only to find the monstrous Omnikron rising from the sea!  At the same time, the now-extended Quest Team, including Dino Boy and caveman Ug, finds their way through the time distortions and dinosaurs to a dig site.  There they find a series of cave paintings speaking of a legendary warrior, one that Ug enthusiastically naemes “Mi-Tor!”  Unfortunately, they also find the agents of F.E.A.R. and Jezebel Jade, who quickly turn the dig site into a combat zone.  Race Bannon is taken out of the fight, and things look grim until young Ty finds the weapon they’re looking for and is transformed (along with his cat, Snag) into the superhuman form of Mightor.

I got goosebumps…  Hang on a minute.

The second story in this issue features the first full appearance of The Impossibles, on the set of their show, which seems to be a live-action version of the cartoon adventures we saw, including the villains.  I have to admit, I’m not 100% on board with this story’s depictions, with the heroes themselves and the production staff seemingly making fun of the original cartoons, but I’m okay with the reveal of the origin of the Impossibles, and the debut of Cobalt, the mysterious woman in blue we’ve been seeing in all the previews.

Both art teams do phenomenal work in this issue, even with the moments of displeasure, although I will say that the sheer size of the cast seems to be slowing down the plot a bit.  I’m glad to see Ty and Snag’s plot-relevance, and both Mightor and Cobalt help to offer additional diversity to the 60s cast-members, and I feel like at least Multi-Man’s new look is a lovely updating of his classic super-suit.  Given that this is an ongoing series, I can’t be too upset to see the deliberate pacing as we build to the threat, but I’d love to see more time given to, f’rinstance, Race Bannon, who is quickly taken out by Jezebel Jade in this issue.  Still, Parker’s script gives most everyone a reason to be here, and works with the dozen plus characters pretty well.

In short, it’s not the best of the five issues to date, but Future Quest #5 is still a better-than-average effort with a LOT of moving pieces, even thought it hits a couple of sour notes (musician joke) regarding The Impossibles, earning 4.5 out of 5 stars overall.  If next issue features the Impossibles and company in their first on-panel battle (and I make no promises of that, given the wildly shifting locations of the first five issues), I hope that the creative team can make up for this issue’s disses…

The origin of The Impossibles and the debut of two new heroes, but the first bit of cynicism about the source material. Excellent art throughout, though...