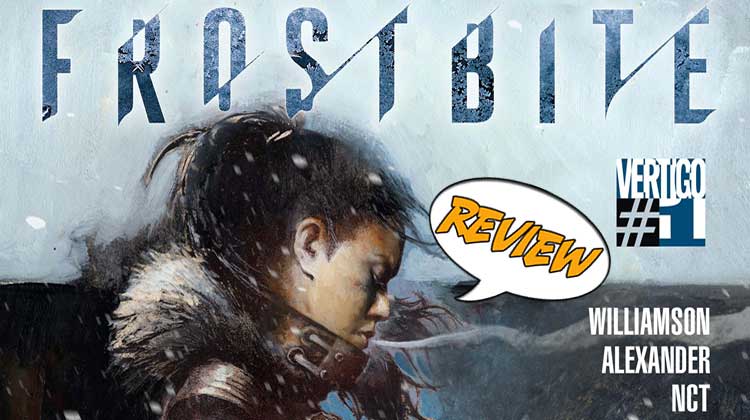 My favorite writers are those who can tell great stories in a variety of genres. Once again, Joshua Williamson tackles another kind of tale, and it’s a great one – this time, sci-fi horror.

Since Mr. Williamson recently signed an exclusive contract with DC, this six-issue miniseries is coming from Vertigo, a part of the family.

Previously in FROSTBITE: Long after Earth has entered its second ice age, humanity has learned to cope with the frozen elements. In this cold and bleak future, heat is power, and brutal gangs roam the icy wasteland looking for it. If that wasn’t enough, a terrible disease nicknamed “frostbite” is literally freezing people from the inside out. Once you catch it, the effect is instantaneous. There is no immunity, there is no cure.
Until now. Doctor Henry Bonham and his daughter Victoria have found the key to ending frostbite. If they can get from Mexico City to a secret government outpost in Alcatraz, they could stabilize life across the globe. But to do that they’ll need to stay alive. That’s where Keaton comes in. She and her crew have faced worse journeys before, but never with the potential consequences this one poses if they fail.
A new miniseries from acclaimed writer Joshua Williamson (The Flash: Rebirth; Nailbiter) and artist Jason Shawn Alexander (Empty Zone; BATMAN: ARKHAM CITY), FROSTBITE is a science-fiction action miniseries unlike any other.

I’ve long been a fan of Mr. Williamson’s writing, from Masks & Mobsters to Ghosted to Captain Midnight to Nailbiter to his current work on The Flash. They’re always good stories populated by interesting characters.

Another important thing I appreciate is his ability to write quite a variety of women characters. Many are strong, much like this book’s lead, Keaton. She’s not always predictable, as when she gets the chance to avenge her family in this debut issue. She takes it, and then lies about it later. Not your superheroic female by any means! Still, she does keep her promises! She’s described as “a South American woman and a ‘coyote,’ a human trafficker specializing in no-questions-asked transportation of people across dangerous landscapes.”

It’s also interesting to see just how cold the Earth is in this story, rarely (if ever) going above the freezing mark. Heat sources are in huge demand, and people look back on the days when heaters and other devices were plentiful. That’s not the case here!

On some levels, the cold reflects how the people interact with each other, much more on a survival basis. Everything’s rough and tumble, and few people do things for the good they can accomplish.

Keaton and her group are approached to take a father and his daughter somewhere. At first, she’s not interested – that is, until something about what’s going on becomes clear.

What’s really creepy about this title is the “frostbite” itself. Early in the issue we see just what that does to people, turning them into ice statues of themselves, easily shattered with a shovel or other implements. And it’s highly contagious, so it tends to take place in clusters. Yikes!

Still, there’s a possible cure being developed, and Keaton might help make that happen.

ART THAT FITS THE STORY

Post-civilized worlds can be problem when it comes to art, especially a frozen one like this one. The art is appropriate because it’s craggy when it fits the mood, yet includes a lot of detail in facial expressions as well as action sequences. I liked it a lot!

The colors really worked, though! Lots of blues and dull reds as well as browns and a lot of white, of course, make the surroundings really chilly. I mean, I needed a warm drink after reading this issue! Brrrr!

I always appreciate it when ice-bound stories like this one come out when it’s really warm outside. Good timing!

Of course, even if the frostbite disease gets cured, there are plenty of potential stories in this new Williamson world, and I’d like to see it continue … even if they need to change the name of the book!

This is a great time to jump on, so I highly recommend you find this debut issue. If there aren’t any paper copies around, digital ones are easy to purchase and download. Don’t miss it!