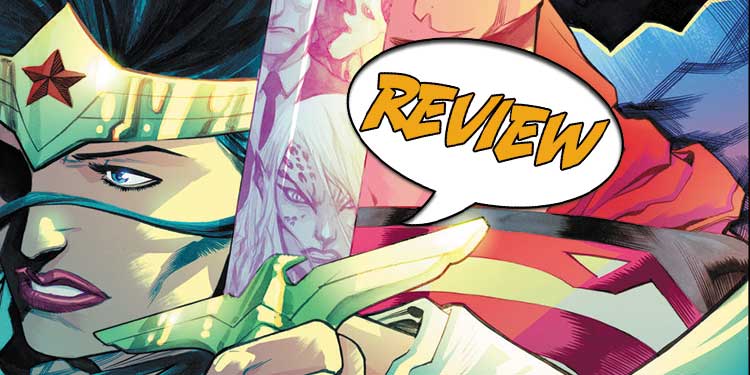 Iron Man, Thor and Captain America? They’re big, but they can’t hold a candle to DC’s big three. Get ready to get reacquainted with Batman, Superman and Wonder Woman as Major Spoilers reviews Trinity #1. SOLICITATION: “BETTER TOGETHER” part 1! Together again for the first time! Batman, Superman and Wonder Woman. The core of the World’s Greatest Heroes…but with a new Man of Steel, the bonds these three share will be tested and redefined by super-star writer/artist Francis Manapul. In this premiere issue, see the trio travel from Metropolis to Gotham City and beyond to learn what forces launched their heroic careers. But how will this journey of discovery lead them to a new threat?

THE BAT-FAMILY FATHER, THE LAST SON OF KRYPTON, AND THE HOLY AMAZON PRINCESS

Trinity #1 by Francis Manapul is the first issue of the new ongoing series featuring DC’s three biggest names – Batman, Superman and Wonder Woman. These cornerstones of the DC Universe have been brought together in similar series in the past. However, this time, Manapul had the difficult task of re-establishing the tenacious team dynamic of DC’s big three. The Caped Crusader and Amazon Princess of the present DCU are not the ones the Big Blue Boy Scout fought alongside pre-Flashpoint. There isn’t the same unyielding bond between them, and Manapul uses this issue to tackle that head on.

What I love the most about Manapul’s approach is that nearly all of the events of this issue take place out of costume. What made the Trinity of both the post-Crisis and post-Flashpoint universes so impactful wasn’t just the relationship between Batman, Superman and Wonder Woman. Rather, it was the impenetrable interconnection between Bruce Wayne, Clark Kent and Diana Prince that shaped the foundation of the Trinity, regardless of which iteration.

In keeping with the theme of Rebirth, Manapul goes back to the basics in this issue. The bulk of the narrative focuses on a quaint dinner between the three un-costumed heroes, as well as Lois Lane and Jon Kent, at the Kent’s farmhouse. While the action in this book is scarce, Manapul makes up for it by delivering an incredible, world-building story. The issue ties in continuity that had been all but forgotten in the New 52, such as the classic rainbow suit Batman of the Silver Age. Of course, the Bruce Wayne of the current DCU has no recollection of this, which he voices in typical stoic fashion for a nice touch of humor. Manapul also ties in New 52 continuity, as Bruce recounts the first time he met the post-Flashpoint Man of Steel. This sequence is by far the highlight of the issue, and it really hammers home the overall theme of the story. Bruce details just how firm his friendship with the New 52 Big Blue was. Even though the man sitting before him shares the same face as the former Kal-El, they are still essentially strangers to one another, which is why Lois arranged the affair that evening.

Speaking of Lois, Manapul manages to tie up any remaining loose ends between her and Diana. I was curious how Manapul would address this, as the latter was in love with the Clark Kent of the New 52. What could have easily been a contrivance of jealousy and bitterness is instead dealt with diplomatically by Manapul. The aforementioned world-building is further established in this sequence, as well. Diana confides in Lois, sharing the struggles she is facing in the current “Lies” story arc of her own ongoing series. It’s a brief exchange, but it serves as another example of Manapul pulling together existing plot points of the past and present to create a remarkably well-rounded narrative.

JACK OF ALL TRADES

The last book I read in which the writer and artist were one in the same was Justice League: Rebirth. If you read my review of that issue, you’ll know I can be skeptical of creators who wear both hats as the quality of one or the other can sometimes suffer as a result. Thankfully, this couldn’t be further from the truth in this issue. In fact, I struggle to recall the last time I witnessed art that so perfectly embodied the story with which it was paired. Manapul crafts compositions that combine soft lines with warm, slightly muted hues that brilliantly emphasize the small-town farmhouse tone of the story. The use of panel layouts evocative of the characters on page during the few in-costume moments is a resourceful artistic decision as a means of introducing the Trinity’s respective members. This also leads to the formation of negative space and clear focal points on the pages.

Though the word “soft” constantly comes to mind when looking at the visuals, Manapul hits hard with gorgeous renditions of iconic past moments. The rainbow suit Batman, the New 52 Superman breaking free from Hal Jordan’s constructs, the ferocious face-to-face between Wonder Woman and Cheetah – these scenes are instantly recognizable, yet they’re all depicted with Manapul’s distinct style.

My only critique of Manapul’s art is his rendition of Bruce Wayne. There are a few panels where he doesn’t really look like the Bruce Wayne we see in other current titles. Rather, I feel he looks more like Clark Kent. This is only exacerbated by the fact that he’s wearing Clark’s farm clothes after Jon inadvertently blasts Bruce with his heat vision. Still, this doesn’t take away from the fact that Manapul manages to deliver outstanding aesthetics throughout the issue.

Out of all the titles DC has released since May, no single issue has better epitomized the message of Rebirth than Trinity #1. Francis Manapul expertly ties up remaining loose ends and ties in elements from DC’s past and present. Despite ending with a cliffhanger, this 20-page story still manages to feel complete and is by far the best individual comic I have read in all of 2016.

Out of all the titles DC has released since May, no single issue has better epitomized the message of Rebirth than Trinity #1.