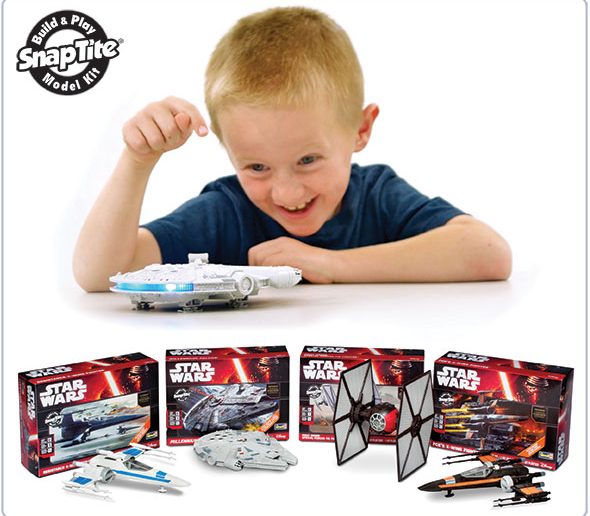 Lighted cockpits! Audible firepower! Movable wings, gun turrets and more! Revell®’s innovative snap-together, lights-and-sound plastic model kits are returning with three new model kit vehicles from a galaxy far, far away in anticipation of the December release of Rogue One: A Star Wars Story. Designed for ages 8 and up, the kit series includes a new Rebel ship that will make its debut in the upcoming film as well as a classic Imperial cruiser and a four-legged Imperial walker – all ready for build.

The new plastic model kits are the latest to be released since Revell introduced the Star Wars™ themed SnapTite® Build and Play™ products a year ago to coincide with the premiere of Star Wars: The Force Awakens. Those four initial kits earned NPD Group’s #1-selling ranking in the model category in 2015 based on consumer purchase data.

Like their predecessors, the three newest plastic model kits deliver hyper-realistic replicas of each vehicle that also include moving parts, interior lights, and battle action sounds that bring each model to life. The pre-decorated parts permanently snap together with no need for glue, paint or tools. The lineup includes: · Revell Star Wars SnapTite Build & Play Imperial Star Destroyer™ (MSRP $29.99) – a plastic model version of the signature vessel of the Imperial fleet introduced in Star Wars: A New Hope in 1977. The model kit has 46 parts, is an impressive 15.75” long when assembled, and includes features like light-up engines and movable gun turrets as well as audible engine vibrations and turbolaser fire. The model kits take up to an estimated 60 minutes to assemble, keep kids engaged for hours after the last piece is clicked into place, and utilize ABS plastic that provides durability, easy assembly, exceptional detail and interactive capabilities.

All models were designed with the same computer data used to create the movie props, resulting in strikingly accurate facsimiles of the vehicles that moviegoers experience on the big screen.

The three plastic model new kits are available on September 30 at Toys R Us, Target and Hobby Lobby stores and online at Amazon. Batteries are included.

About Revell Inc.
Revell has been a worldwide leader in scale plastic model kits since 1945. Today, Revell offers more than 7,000 different accurately detailed cars, trucks, ships, aircraft, spacecraft and more scale plastic model kits. The company is a subsidiary of Hobbico, Inc. one of the largest designer, manufacturer and distributor of radio control and model hobby products in the world. For more information, visit www.revell.com.