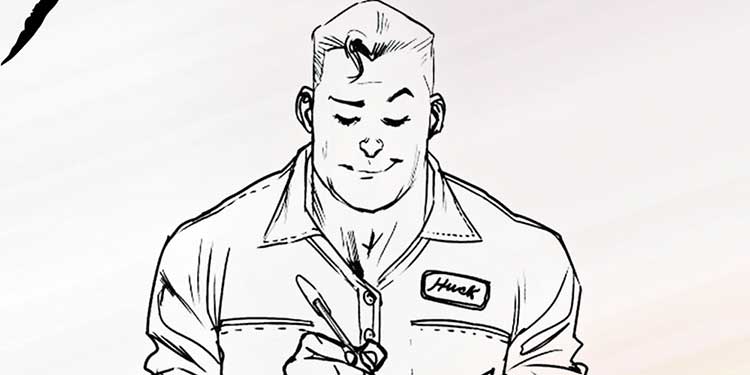 The star of Millar and Rafael Albuquerque’s hit comic series “Huck” will be available as a limited edition mini-bust this winter.

“I’ve been a fan of Mark’s work for years and, honestly, as soon as we’d heard about a comic set in Maine, we knew we had to check it out,” said Skelton Crew Studio head Israel Skelton. “The book is gorgeous and moving, and we’re just amazingly excited to be working with Mark and Rafa.”

Huck will stand about 8 inches tall, holding his book of good deeds, perched upon an antique gas pump.

“We love the premise of the comic and incorporating his good book was a must,” Skelton said. “I can’t say enough about Rafa’s art and how he captures subtle emotion and we’re hoping to do it justice.” “I couldn’t be more excited about this,” said Millar. “Huck is maybe my favourite work of my entire career and Rafa and I have been really heartened by the way people just seemed to immediately respond to it. Seeing it as a trade, getting made into a movie and now having him in 3D on my bookshelves just seems crazy when he was just a doodle a couple of years back. Israel and Kathryn’s products are all world-class and it’s just been a pleasure working with them. I’m looking forward to owning this more than anyone.”

Check out www.skeltoncrewstudio.com for work-in-progress shots and release details as they become available.

Started in 2003, Millarworld is an ethical comic-book company where the creators own their own franchises and the writer and artists share a 50/50 split in all media. So far they have produced Wanted, Kick-Ass, Kingsman: The Secret Service, Starlight, Superior, Jupiter’s Legacy, Huck, Jupiter’s Circle, MPH, Chrononauts, Hit-Girl, Empress, Superior, Nemesis, Supercrooks, War Heroes and American Jesus. Many of these have been made into films. The rest are in development.

Based in the wilds of Maine, Skelton Crew has the exclusive license to create 1:1 prop replicas, plush, statues and vinyl from some of the hottest reads in indie comics including Locke & Key, CHEW, Hellboy, Mouse Guard, The Stuff of Legend, Revival and Killogy. The studio, founded in 2008, has created a name for itself by working closely with creators to produce high-quality, limited edition collectibles.