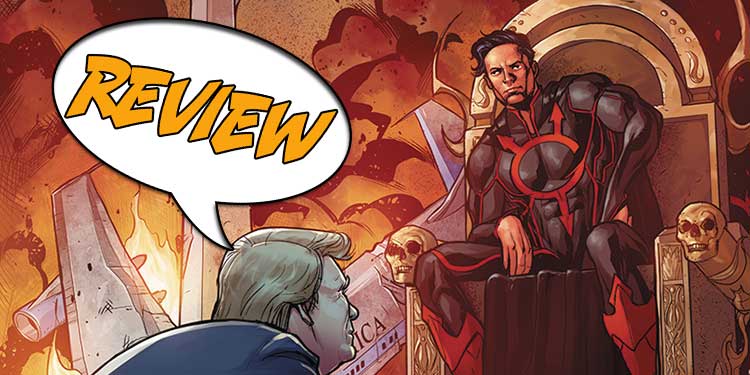 As the world is thrown into chaos, a team of heroes must be created to take on Evil Superman… No wait, that’s not right. Previously In E.V.I.L. Heroes: The world as we know it has gone. The New Gods, led by the bloodthirsty deity Chaos, have come to rule with an iron hand. Deep beneath the Nevada Desert in a secret military base Derrik Tillman and the rest of his former team are mankind’s last hope.

Is it wrong of a reviewer to judge a book before even reading it? Because even before reading this book I knew exactly what was going to happen and I tend to like at least a bit of mystery in the books I read. I know all human being will judge books by their covers; it is the entire reason why comic companies put a huge amount of money into cover art. That one image does more for the books sales that all the marketing and reviews combined; although in Zenescope’s case it is always ‘covers’. They are very much a throwback to the comic book boom of the 90s where everything had multiple covers for the ‘collectors.’

It doesn’t bother me in the slightest as I almost always read digitally or in trades and Zenescope always uses the extra issue covers as ‘filler’ in the back of their collected editions, but I have never understood the reason why people will pay a huge amount of money just to get a comic with a different picture on the front. For me it is like spending a fortune on a house, just because the front door is red instead of blue; once you walk in its all the same.

Getting a Strong Sense of Déjà Vous

I have often though (and said a lot in previous reviews) that comic companies outside of Marvel and DC should stay well clear of superheroes. Don’t get me wrong, I do not in any way think that other companies cannot do superheroes and this book does not disappoint on that level; the problem is we have seen everything before. And I mean everything. Twice. At least.

Even the big two comic publishers resort to rehashing stories, Marvel has been particularly guilty of this in the past year. Last summer’s Secret Wars event was the third version of Secret Wars, and within that event they had repeats of every other major storyline Marvel has ever produced. Sure they can explain that away as giving the public more of what they wanted, not to mention that most comic readers weren’t even alive when those events were previously done, but for old guys like me, it dragged.

This book is fine. It’s nice. It’s well drawn. The dialogues all right. The problem is, note for note, beat for beat, I have seen everything this book has to offer. Twice. At least.

Imitation is the Sincerest Form of Flattery

If this was an issue of Injustice Gods Among Us, IXth Generation or for that matter Squadron Supreme or even Xena, then this might feel like a really good book, the problem is it draws so heavily from other series that it just feels repetitious. I understand that it is trying to be topical and allegorical, but unless you are Alan Moore creating Watchmen, this is bound to fail.

This combines the ‘Evil Superman’ motif from Injustice with the villain team up last seen in Squadron supreme, throws in a little bit of ancient mythology and then ends the book with the creation of a superhero team to fight that problem.

What really annoys me about this isn’t that this is a bastardization of other superhero comics, more that it comes from Zenescope. For the last 10 years they have ploughed their own furrow, pretty much single handily creating their own horror/fairy tale comic genre. Fair enough that involved rehashing old fairy tales, but given the time between those stories creation, and Zenescope’s retelling, so much had happened that they could make them feel fresh and exciting. If they had given this a decade, perhaps they could have gotten away with it, but right now, squeezing this book into an already overcrowded genre it is lost at sea.

EVIL Heroes is a pretty book, but that is all it has going for it and unfortunately it isn’t enough.