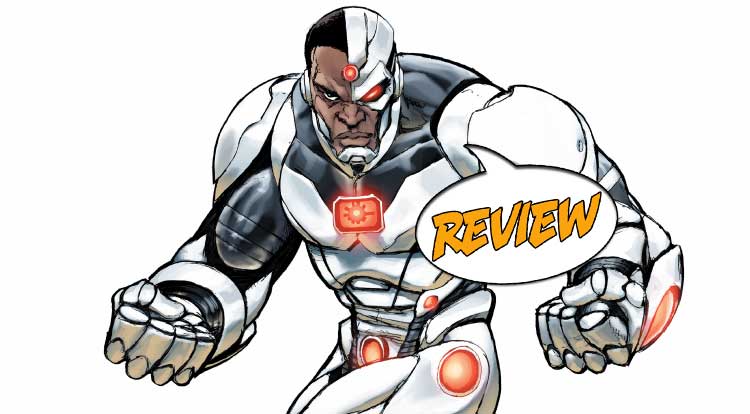 Victor Stone is back, and the ghosts of his past are coming with him…  Your Major Spoilers review of Cyborg: Rebirth #1 awaits! Previously in Cyborg: Rebirth: A freak accident left Victor Stone’s body nearly destroyed and only an experimental procedure saved his life, leaving him a merging of man and machine: A cyborg.  A founding member of the Justice League Of America, whether readers from before 2011 like it or not, Vic Stone is now one of the premier superheroes of the age!

As with most of the Rebirth titles, this issue is written to be the perfect first-issue introduction to all things Victor Stone, including a recap of his origins: Trapped in an exploding boom tube, Vic was near death when his father, Silas, used alien technology to rebuild him.  This is all told via flashback as Victor fights off a giant creature called ‘Malware’ in the present, including some additional information about Vic’s late mother.  There’s also the introduction of a new plot point, as Victor’s defeat of Malware leads him to discover a hidden audio file of Silas wondering whether the Cyborg created during the procedure is actually his son Victor at all.  It’s a valid question, one that has been addressed in much science fiction of the past, but it makes for a nice twist on Cyborg’s traditional resentment of his new form dating back to his creation circa 1980…

There’s also a new villain in the wings, obviously created to be Cyborg’s own Joker, a dark mirror of the hero we know.  Depending on how well the story is told, it could very well work, especially as it seems to take into account all the other cybernetic and technological heroes of the DCU, from Robotman to Steel to the Metal Men.  A Unified Field Theory of DC robits would be really great, and John Semper’s story has a lot of potential to it, but the flaw of this issue comes in the art.  Cyborg’s new armored form is clearly influenced by movie Iron Man (though, these days, what armor isn’t?), and Paul Pelletier’s rounded, bloopy pencils seem like an odd choice for a character whose whole schtick is technology and armor plating.  Still, the various inkers in this issue do much to hold things together, and the coloring and visual effects are first-rate.

There are a lot of cool things to be done with the Cyborg character, and I like the idea of giving him a signature villain of his own (even with the limitations of such a gimmick), so I’m totally sold on seeing Victor Stone searching for the truth of his own humanity.  Even with Pelletier’s art not quite making the great, Cyborg: Rebirth #1 is a good read, an issue that reminds readers of how cool Cyborg is while setting him off onto his new adventures in style, earning 3.5 out of 5 stars overall.

Not at all a fan of the art (or the Iron Man overtones of Cyborg's new armored shell) but the story has interesting things to say...