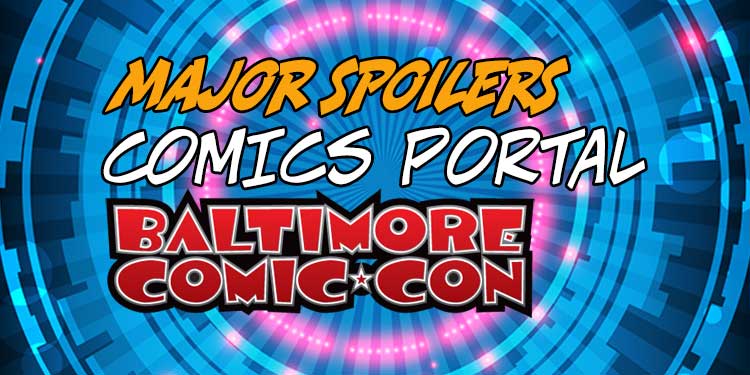 Talent can get you pretty far in the comics industry, I think. But there’s something else that can really help – connections with people who can help along the way!

This past weekend, I attended the 17th Annual Baltimore Comic Con, and it was first time I was on the “business” side of the Artist Alley table! Oh, I’ve been to this convention many times before, and always enjoyed it. But it was something to be there and selling as well as buying and making contacts.

Some great possibilities are in the works with some friends of mine, and I can’t really divulge any information… yet! But all these things are being made at least possible by connections.

HOW WAS THE CONVENTION?

The Baltimore Comic Con calls itself, “The World’s Greatest Comic Convention” and “America’s Great Comic Book Convention!”Granted, it was a really good one, but I hate to quibble with what a con calls itself.

This convention doesn’t invite many media guests since it focuses largely on comics. However, there were some good ones, including Sean Astin, Hayley Atwell, Kristian Nairn and Michael Rowe.

Friday was a really, really quiet day, but Saturday was often so full that it was difficult to navigate the aisles. Sunday was like that at times, but it had it’s quieter moments as well.

We had one weird occurrence on Saturday. That took place when the fire alarm sounded around 6 p.m., and many of us had to leave the building. Eventually, they did determine it was okay to go back in, many of us had already left for the day. Sigh.

Overall, I thought the convention was a good one, and new friends were made and new fans discovered great new books and pieces of art.

BE GOOD TO THOSE AROUND YOU

I’ve been to a lot of conventions this year, and one of the things I always think is helpful is to be at least cordial to the people around you. Get to know the people at other booths and those working in your area. If you can help someone out, do that. That means responding to those people if they need it – giving them change if that will help them make a sale, for example.

I always like to think that “stars” and other well-known people really just want to be treated like a regular person. I’ve met several big names in my days, and these folks like it when you react with respect but not like you are overwhelmed. I’ve been tongue tied around stars, and they never think it’s cute, for instance. These days, I say less if I end up in an elevator with an actor or actress and can’t remember what roles they played in the past. I’ve congratulated people for roles they never played, and that just doesn’t impress anyone!

I say this because people who have worked hard to get where they are MOST of the time are just like the rest of us – they don’t want to be hit up for favors or anything like that. Just be nice to them, and they’ll be happy around you!

I used to do a podcast with a friend who, after an interview we both were involved with had concluded, he’d ask me, “Do you think (that person) really liked me?” I think that’s missing the point – You’re there to help get the word out about a project that star is involved with. They may or may not remember you the next day, but it’s about helping THEM, not ingratiating yourself with them. I mean, it’s called the Wayne’s Comics Podcast, but I’m not the star! The comics and their creators are the stars, in my opinion. Should that ever change, I’ll stop doing it!

If you’re fortunate, as you interact with others in comics (or really, any other industry), you meet people you think really do a great job. I try to stay in touch with these people, but don’t want to be intrusive or too “friendly.” But I do like to help people who I feel are on the way up in comics as much as I can – interview them, review their books, things like that.

Circumstances change, often unexpectedly. The person you’re friends with might be someone who can in turn help you or a friend.

Either that or, if you’re talking with that person, they’ll know someone who can help resolve a problem. You need a letterer, for example, and a friend knows someone who does a great job on that, and they help you get in touch with him or her.

I always like to say that it’s important that you also are a good connection! Don’t only have things flowing your way! Give as much as you can as well!

YOU CAN MAKE A DIFFERENCE

Again, I apologize that I have to be vague this week, but as soon as important news becomes available about comics I care about, I’ll share it here.

I do like to reflect on how I understand Scott Snyder worked with James Tynion IV (who was at the Baltimore Comic Con this weekend) and, although I don’t know the specifics, apparently worked with him (a student of his) and helped him become a great comics scripter in his own right! Now he’s writing Detective Comics, one of the best offerings from DC in the Rebirth event! And they’re great friends, too!

To find out more about the Baltimore Comic Con, you can go to their website at this link! I’m sure they’ll be back next year, so check out their site in the coming days for more information!