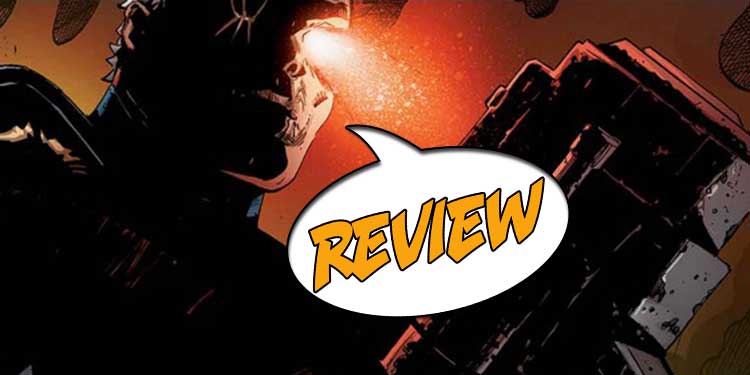 Ultron is gone, and he didn’t even have the courtesy to stick around for the big Civil War. Oh well, he’ll have to read what happened in back-issues because your Major Spoilers review of Uncanny Avengers #13 is about to begin. Previously in Uncanny Avengers: Hank Pym, founding Avenger, was presumed dead. However, when he returned to Earth merged with his evil creation Ultron, the Unity Squad was forced to vanquish him into the sun. All the while, the events of Civil War II began to unfold. An Inhuman with precognitive abilities by the name of Ulysses emerged, and his powers have driven a stake between the superhero community. On top of that, New Avengers member Hawkeye was charged with the murder of Bruce Banner, further straining the fractured relationship between former friends and team members.

This issue of Uncanny Avengers is a tie-in to Civil War II and features two interlocking narratives the fall within the scope of said event. In the first half of the issue, writer Gerry Duggan takes us on a short trip down memory lane as we revisit the murder of Bruce Banner, courtesy of a well-placed arrow fired by Clint Barton, AKA Hawkeye. This time, the events unfold from Deadpool’s perspective, and Duggan’s scripting of the Merc with the Mouth’s metatextual monologue adds a nice touch of humor to an otherwise somber scene. While we do get some action as Deadpool detains a couple of prison guards, the real highlight of this portion of the story is the dialogue exchange between him and Clint. Rather than your archetypal superhero moment, Duggan delivers a touching display of character development. This is a conversation between Wade Wilson and Clint Barton, as opposed to Deadpool and Hawkeye, save for Deadpool reassuring Clint that the first kill is always the hardest and that he’ll become the Punisher in no time. My only gripe with this half of the story is that Civil War #4 was already released, where we learned that Clint was acquitted of all charges. This ultimately lessened the emotional impact of the scene, though it’s through no fault of Duggan as shipping delays, release schedules and editorial decisions all play a factor.

In the second half of the issue, we find ourselves in New Attilan, home of the Inhumans. Ulysses has apparently foreseen a war being waged by one of the members of Captain America’s Unity Squad. To Cap’s surprise, it’s not the loose cannon Deadpool, but rather Cable that will supposedly be the cause of the death and destruction depicted in Ulysses’ vision. After confronting Cable, we get a great exchange between him and Cap as they butt heads over their conflicting ideals in relation to Ulysses’ prediction. In contrast to the dialogue between Wade and Clint earlier in the issue, which showed unity and solidarity, Duggan’s execution of this scene is truly befitting of a book branded as a Civil War II tie-in as themes of distrust and betrayal are on full display.

In the final pages of the issue, it’s revealed that Cap’s concerns weren’t for naught, so to speak. Cable and Rogue embark on an unsanctioned mission to search for a cure for the terrigen poisoning that has been plaguing the mutants, which could set the stage for the so-called “war” Ulysses envisioned. There’s also a reveal that Cable and Rogue aren’t alone, as it seems they’ve formed an uneasy alliance with two unexpected mutants, which I won’t spoil, but it certainly adds a nice touch of intrigue for what’s to come.

The art within the pages of this issue of Uncanny Avengers is courtesy of Ryan Stegman, along with colors by Richard Isanove. While this isn’t quite on par with some of Stegman’s work on Spider-Man, there’s no denying his aesthetic appeal. One thing that doesn’t always get the praise it deserves is the background imagery, and Stegman’s intricate line work, especially in the jail cell, is exceptional. However, I wasn’t particularly drawn to the look of some character’s faces, which is troublesome for me. For example, the amount of detail Stegman puts into Hawkeye’s face is commendable in the close-up shots, but it leaves him looking somewhat haggardly when he’s further off in the distance. I also found Deadpool’s typically expressive eyes to be a bit too beady for my liking. Those nitpicks aside, Stegman spares no expense when it comes to creating engrossing overall panels, such as the copiously crafted one in which Deadpool is swimming to his getaway boat.

Isanove’s vibrant, saturated colors pair well with Stegman’s delineation, as he utilizes a beautiful blend of warm and cool hues. The Reds, blues and purples of the twilight sky as Deadpool parachutes down to the prison are enchanting and contrast perfectly with the bright white searchlights, which radiate a slight blue tinge to pull the composition together. From there, Isanove switches to a primarily warm palette throughout the first half of the issue, and then reverts back to cooler tones that mirror Duggan’s intertwining narratives in a dynamic display of sequential art.

Duggan’s parallel storytelling, with contrasting themes of harmony and hostility, is simply superb. This is not what I expected from Uncanny Avengers, and it’s definitely one of the deeper issues from the series. Stegman’s art is solid, despite not being his best work, and Isanove’s colors work wonders to capture the tone of the story.