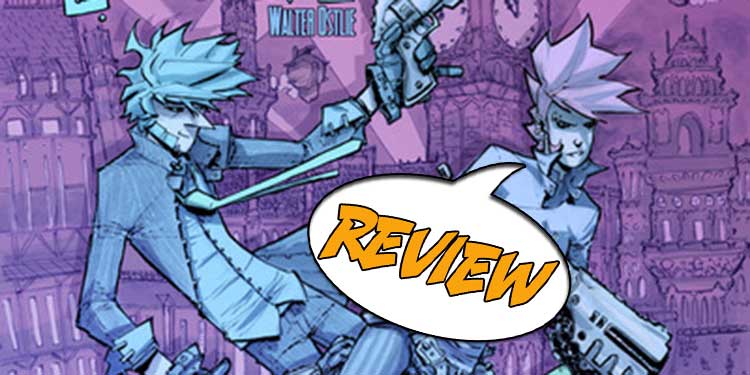 This collected hard back comes with a whopping 350 pages of ghosts and ghouls known as ‘the shivers’ tormenting London. This comic is full of East End London language and amusing in jokes, not to mention the largest nose I have ever seen in print.

Previously In Shiver Bureau: Shiver Bureau is a wonderful online comic created by Walter Ostlie which has been running since early 2012. This takes us back to the very beginning, introducing our key protagonists Inspectre John Pickle and his initially unwilling assistant Trish as they battle against the Shivers, the spectral incarnations of those unable to pass over to the other-side.

Well no, not really. This is my only real issue with this book, so I will get it out of the way quickly. The comic itself is only the first 150 pages and that is followed by some really fun shorts written by the creator years before the webcomic was started showing the development of his style. However the final 150 pages is the entire comic repeated in dialogue free black and white. This is something you see Dynamite comics doing a lot in their digital offerings, but only a few pages of the comic are repeated, not the entire book.

While I consider myself an ‘art first’ sort of comic book appreciator, this is too much even for me and it seems like such a waste of space. In a digital format as my review copy was, it makes more sense because a few extra digital bytes doesn’t matter, but in the printed format it feels excessive.

Who you Gonna’ Call?

While the publisher’s preamble lead me to expect a comic version of Ghostbusters, it could not be further from the truth. This has a very mystical aspect as we find out that Inspectre’s not only have Spectral powered guns, but their bodies are overflowing with this energy to destroy or inhibit ghosts.

What surprised me even more was the lack of ‘shivers’ actually in these 150 pages. There are a couple of chase sequences throughout with the stylised ghostly creatures, across air ships and retro cars, but the real villains of the book are shape-changing reptilian monsters and a creepy orphanage owner who makes the Child Catcher from Chitty Chitty Bang Bang look like a philanthropist. It was only afterwards that I realised I wasn’t looking at this in the right way. This is much less of a graphic novel and far more a collected edition; these comic pages are years apart and if you read through carefully you can see the artists style changing throughout.

More than the Sum of its Parts

I have done a terrible job of promoting this comic so far, most people reading to this point will have assumed that I thought this was overpriced, mis-leading and not worth reading; nothing could be further from the truth. In fact what annoyed me most about the repeated 150 pages was that just as I felt I was getting into the story, it finished. I was looking for part two, to find out what their next adventure was; which part of London they were going to blow up next. For me that is a sign of a fantastic book, one which leaves you wanting more despite all it has given.

The art style is perfect for the story being told and it is really interesting looking at the back up strips to see how the creators style changed and developed over time as the was refining the idea and condensing the characters (and watching Pickles nose grow ever larger). I am a terrible snob for art in comic books; if I don’t like the style, I will hate the book, no matter how good the story is. Conversely I will suffer through some pretty dull issues if the art is good enough to make me turn the pages. The art here in different circumstances would put me off; it is very stylised and rough in places, but what makes it work is both its consistency and the colouring.

Ostlie has chosen the perfect palette full of greys and greens which make you feel the dirt and decay of this world. He then knows exactly when to drop in a touch of red; be it Trish’s red Mohawk, the sign of the seedy bar or the perfect pinpoint car lights in the wide shots. Despite his refining of his art style throughout the book the colouring gives this such a unified and encompassing look and really pulls you into the world he created.

This book epitomises why I love ‘blind’ reviewing comics. If I only reviewed the comics I read each month, then I would be talking about the same 20 series over and over again. There is no way I would have ever come across this book in the usual shops I go to and even if by chance I had seen it, I doubt I would have ever been interested enough to pick it up and read it. I have read a lot of terrible comics by ‘blind reviewing, but I would happily force my way though ten terrible books to find one gem like this.

Shiver Bureau’s world oozes off these beautifully crafted pages in shades of gruesome green and ghastly grey, but could do with a few more ghosts.