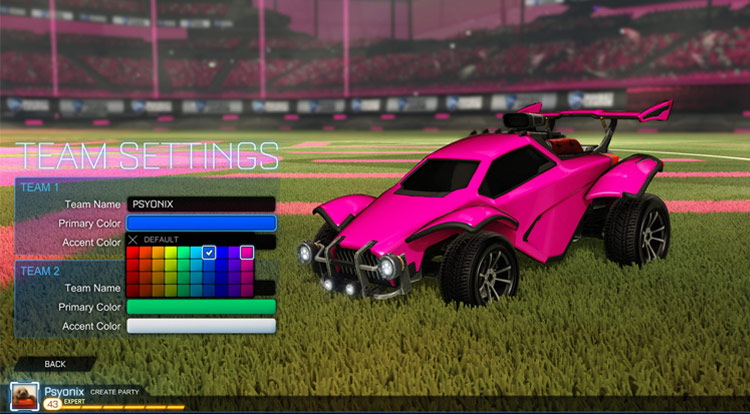 The announcements keep coming for the big Rocket League update scheduled to hit in September.

During the Rocket League Championship Series, Psyonix, the company behind the smash-hit Rocket League, premiered the video to announce the big new update to their game, Rumble. Since that video, Psyonix has kept with the announcements with everything from community flags to updated boost animation to new arenas.

Give your friends the boot with “Rocket League® Rumble!” This FREE new mode for the Playlist and Mutator sections will let you compete in an epic battle roya…

Their latest announcement won’t change the gameplay of Rocket League at all, but has made current players of the game incredibly happy. When the new update goes live, players will be able to create custom names and custom colors during their private matches.

When players select their team name, it will then be displayed on screen after a goal, which is a nice little touch. Custom colors does a little more though as the stadium will reflect the color choices of the team, instead of the traditional blue and orange.

This tiny change in the game customization gives many hope that eventually players will be able to create different loadouts for vehicles depending which team (orange or blue) that they randomly get assigned to while playing online. With as many items that are available to add to your rocket-powered vehicle, it would greatly increase the customization that each player can do, which, at least for me, is always a good thing.

And, there is still time for Psyonix to make that announcement or any other exciting bit of news they have up their sleeve because they haven’t given an official day that the update will happen. At their current pace of announcements for the update, I wouldn’t expect this to be the last  announced Rocket League update before Rumble comes out.