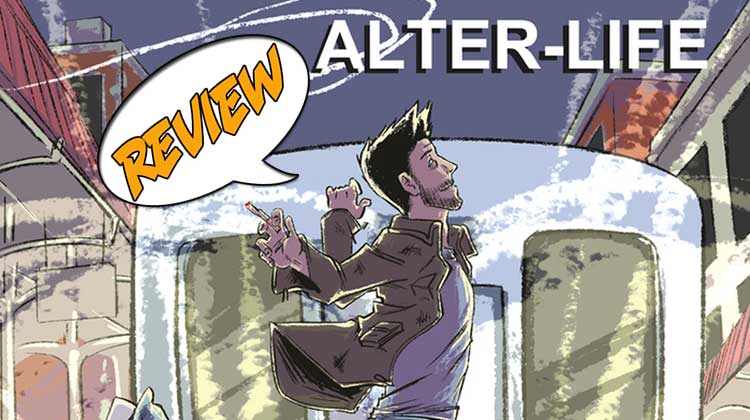 Suppose you discovered that every time you died, you actually transported into another you in another, albeit somewhat similar, universe? What would that do to you?

The answer begins to take shape in Alter-Life #1, which I had the pleasure of picking up at the recent Wizard World Chicago convention!

Previously in ALTER-LIFE: It’s been a rough few years. Trapped in a dead-end customer service rep job, his wife and child recently killed in a tragic accident, Jake decides that he is just going to end it all. On that day, the very time and place he decides to kill himself, he is presented with a chance bring meaning to his existence. Jake decides that his life has led to this very moment, but just as the meaning of his existence becomes clear, he is killed. The world goes black, and suddenly he’s standing right at the very platform before he died. Only now, there is no child to save. Everything is different, but everything’s the same. This moment of discovery will send him on quest for the truth about his past and the mystery behind the source of his new-found abilities.

SCI-FI AT ITS BEST

I know I say this a lot, but science fiction excels when it answers the question, “What if?” This comic does that superbly, exploring what we’d like to change in our own lives if we had the chance.

That’s what’s going on in Alter-Life #1, an Indie comic that recently completed a successful Kickstarter.com campaign.

When I took this back to my hotel room, a friend of mine and I started talking about this book. It seems that “our” Jake “kills” the other Jakes when he takes their places. He doesn’t seem to realize that yet, but that should have quite the impact on him when he finally has to come to grips with that.

This comic makes me wonder how I would react in that situation. Would I be freaked out? Would I be happy? Would I take it all in stride? (That last one, not hardly!)

Jake does make some choices I think I’d never consider in this first issue, but that’s from sitting comfortably in my chair at home. If I were actually going through this, it all might be different!

If you think this is all there is to the story, Alter-Life #2 is “on the horizon,” so I’m anxious to see what’s coming next!

ART A LITTLE CRAGGY FOR MY TASTES

I like the art in this comic most of the time, but there are instances when it feels just a little craggy, a little less cohesive than I usually like. It does fit the story, though, so I can’t fault it too much. The facial expressions are great, though, and that pulled me right in!

The choice of colors is interesting, with few truly bright shades. Mostly, it’s subdued purples, browns, and blues, which adds to the mood of the script. Good job!

I’ll be talking with creator Caleb Thusat this week on my Wayne’s Comics Podcast. We’ll explore some of the issues I’ve brought out here in issue #1 and see what’s ahead, including issue #2!

Mr. Thusat and friends have a Kickstarter project taking place right now in ZED, and it will conclude this Thursday, September 1, at 11:00 a.m. ET, you can find more at their Kickstarter page.

For more on Alter-Life, go to their Facebook page at this link!