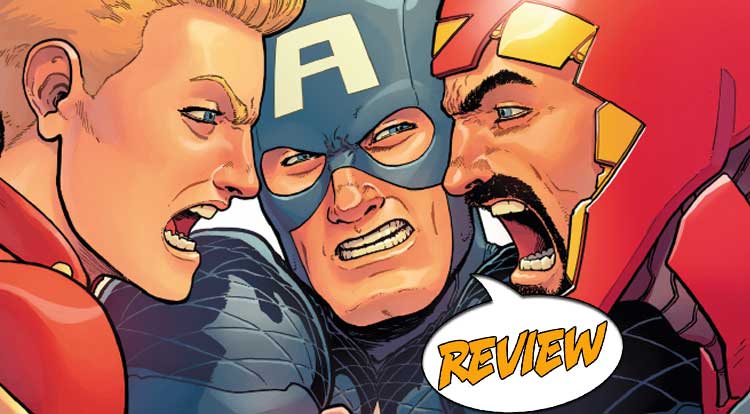 That awkward moment when you’re busy being a secret Agent Of Hydra, but your teammates insist on having a Civil War…  How rude!  Your Major Spoilers review of Steve Rogers, Captain America #4 awaits! Previously in Steve Rogers, Captain America: “Steve Rogers’ reality has been secretly rewritten by the sentient Cosmic Cube named Kobik, who was acting under the influence of the Red Skull.  Now, a woman named Elisa Sinclair recruited him and his mother to the villainous organization known as Hydra when Steve was a young boy, and he’ll do anything for the cause…  but he may NOT be walking the Red Skull’s party line.  The Red Skull ordered Steve to kill Dr. Erik Selvig, the undercover Hydra agent who helped to raise Kobik and designed SHIELD’s reality-bending super-prison, Pleasant Hill.  But Steve seems to have his own agenda for the Coscmic Cube expert…”

As a reader, I’m always leery of stories where (for whatever reason, justifiable or not) we are told “EVERYTHING YOU KNOW IS WRONG!”  This series started with a little bit of controversy over the reveal that Steve Rogers is actually an agent of Hydra and has “always” been such, a reveal that is heavily muted by 70+ years of comics that disprove that theory.  That said, I always want to give concepts room to breathe, and four issues in, the story is already starting to buckle.  After capturing Erik Selvig, killing Baron Zemo and leaving a trail of false evidence, Captain America is ready to explain to Selvig what’s really happening.  He’s a true convert to Hydra, he explains, and the superhero community isn’t going to be a problem, thanks to one of their periodic schisms where everyone fights each other, but he needs Selvig’s help with one singular goal: Kill the Red Skull.  At the same time, Maria Hill has to deal with the fallout of her extremely stupid plan to brainwash villains using Kobik the Cosmic Cube, Bucky and the Thunderbolts have to keep that selfsame Kobik happy, and Jack Flag is still in a coma…

BUT NOT REALLY A CIVIL WAR II STORY AT ALL

This is a complex story with a lot of moving parts, but Nick Spencer characteristically isn’t linking them in ways that make it all feel organic, instead giving us several puzzling vignettes that are clearly building towards something apocalyptic.  I’ll admit that the issue lost me early on, when it is revealed that Steve captured his new secret headquarters by brutally murdering The Red Ghost and his super-apes (which, aside from it being a shocking moment that seems like it’ll be hard to blow off with the old “mind-control” defense, seems to underestimate a group that succesfully fought off the powerful Fantastic Four), but the threads of plot seem only tangentially related.  The art is lovely, as Pina and Sepulveda are excellent in blocking out the many talking heads sequences in the issue and making everyone look really good (although elderly Sharon Carter looks a bit “bloopy” for my tastes) and the action sequences, while narratively problematic, look great.

There are a couple of big strikes against this issue for me in that the cover is in NO way representative of the contents and that there’s really no reason (other than a brief dialogue reference to the conflict between Iron Man and Captain Marvel) to label this a CWII crossover.  But the bigger problem for me comes with the multiple murders committed by our hero on his path to a plan that is actually just more murder, making it clear that the shock value is in fact the centerpiece of this arc’s plot.  Captain America, Steve Rogers #4 is a beautifully drawn collection of drawn-out dialogues that ends up feeling like 20 pages of lecture punctuated by blood, earning a disbalanced, heavily flawed 3 out of 5 stars overall.  I don’t want to be too hard on the book just because I don’t care for the premise, but the central maguffin is the least of the problems on display in these pages…

A talky, overwritten book with some lovely art that can't quite overshadow the scarcity of it's plot...