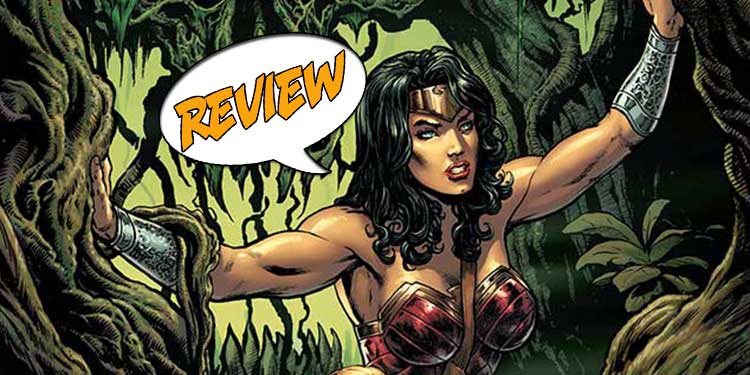 An Amazon Princess, an anthropomorphic jungle cat with a blood lust, and Steve Trevor playing the damsel in distress? This must mean that your Major Spoilers review of Wonder Woman #5 is about to begin. CHEETAH AND DIANA, WALKING THROUGH THE FORREST

Wonder Woman is a character with a deep, rich history spanning all the way back to the Golden Age of comics. However, 75 years of continuity have left the Amazon Princess with a convoluted background that writer Greg Rucka is attempting to remedy through interchanging stories from Wonder Woman’s past and present. What’s interesting in this issue is that we don’t even see Wonder Woman, save for a photograph belonging to Steve Trevor, until about halfway through the book. Instead, the issue begins with a late-night meeting between Etta Candy and Sasha Bordeaux, as Etta explains that they’ve lost contact with Steve and the rest of his team. The exchange is rather dialogue-heavy, which ends up being a recurring theme throughout the issue. While this isn’t necessarily a problem, it did make me feel like things were moving slowly at times and I would have appreciated a bit more diversity in terms of pacing. Still, it’s during this opening sequence that Etta reveals to Sasha that Wonder Woman and Steve Trevor are somehow bound to one another and that whenever one of them is in trouble, the other will surely respond. I enjoyed this moment and like the idea that they decide to leave Steve’s fate in the hands of Diana based on Etta’s understanding of their bond. However, Rucka gives us a glimpse of Sasha’s ulterior motives, which are sure to be expanded upon in this or perhaps a future arc.

A large portion of the issue details the happenings in Bwunda between Steve and his captor, Cadulo. Steve comes off as snarky, yet tough, and his characterization early on in the issue really works for me. The problem I have is with some of the dialogue. I already mentioned the quantity concerns but in this case, the quality is also a factor. Steve calling Cadulo “dude” and quipping that one of the things he desires is “a nice cuddle before bedtime” left a bit of a bad taste in my mouth. This didn’t seem to bother Cadulo, though, as he believes that it is the hands of the Gods that led Steve to Bwunda so he could be the vessel used to unleash Urzkartaga.

While all of this is taking place, Wonder Woman and Cheetah are still on their journey and still trying to remember who they are. The character development between Diana and the former Barbara Ann Minerva is one of the strongest aspects of this title and while it was still on display here, it wasn’t quite as emphatic as it was in the last issue and left me wishing there was more. It is here, though, that Rucka grabs the bull by the horns as far as addressing the aforementioned muddled history of Princess Diana. She feels her memories have been corrupted by an unknown entity, which is reminiscent of the DC Universe Rebirth Special where we learned that someone had stolen ten years of history from the DCU. This, of course, was used to explain the continuity issues that plagued DC after the New 52 and it seems that Rucka is taking a cue from Geoff Johns by using a similar approach for Diana.

The art in this issue of Wonder Woman consists of pencils and inks by Liam Sharp and colors by Laura Martin. Sharp’s surname is actually quite fitting because let me tell you, his line work graces the page with a painstaking level of precision. The crosshatching in the city street on the opening page evokes the feeling of a rough, canvas-like texture and would look just as beautiful mounted and framed in one’s home as it does in this book. The detail Sharp puts into Wonder Woman, especially in the close-up portraits, is stunning and I find it hard to recall the last time Diana has looked this divine.

Sharp’s creative panel layouts ensure an optimal flow on every page and I love how he hones in on character’s faces during some of the one-on-one dialogue exchanges. In the conversation between Etta and Sasha, this forces Sasha’s scar to become the focal point and you almost get a warm sensation in the left side of your face when looking at it. Then there are the panels created organically by way of Urzkartaga’s vine-like tentacles and the wooden bars of the holding cell that make for an incredibly effective composition. In the case of the holding cell, seeing Wonder Woman emerge from the shadows panel by panel works as a perfect example of efficient sequential art. Perhaps my favorite page, though, is the one where Sharp uses shattered glass to form the panels and to depict various points throughout Wonder Woman’s complicated history.

Sharp’s lines and inking pair perfectly with Laura Martin’s colors in a beautiful blend of deep greens and blacks, contrasted with vibrant blues and reds. Martin adds a gorgeous glow that enhances the depth and pulls characters and images right off the page. The contrast between the bright and shining Themyscira of Diana’s memory and the muted and somber jungle she treks through with Cheetah really helps establish the atmosphere. Martin also achieves this with the vivid and energetic shades of yellow and orange as we see the shattered glass panels, divided by a luminous bolt of lightning.

BOTTOM LINE: A WONDERFUL CHAPTER OF AN EXCELLENT STORY

As a standalone issue, this third installment from “The Lies” arc isn’t quite as strong as its predecessors but it’s still a great book when you look at it as a chapter of a larger story. I still highly recommend Wonder Woman #5, especially due to Liam Sharp and Laura Martin’s phenomenal art, but I would also recommend re-reading the story arc as a whole once it’s collected in trade.

This issue isn’t quite as strong as its predecessors but it’s still a great book when you look at it as a chapter of a larger story.