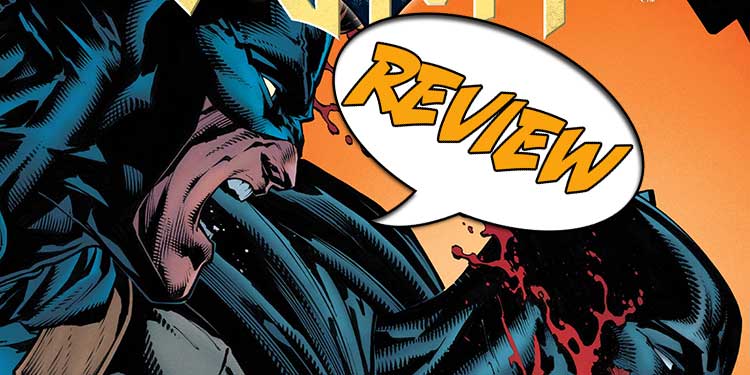 When Gotham is attacking Gotham, who are you gonna call? You’ll have to read on to find out as Major Spoilers reviews Batman #5. Previously in Batman: A reluctant Dark Knight, who had taken Gotham and Gotham Girl under his wing, learned that recent events that had unfolded in his city were the result of Hugo Strange and Psycho-Pirate. Now, the two new super-powered vigilantes have fallen victim to the Pirate’s control over emotions. Gotham Girl, who was struck with incredible fear, was subdued but Gotham was overcome with anger and rage, which he plans to unleash on the city that shares his namesake.

The issue begins with Gotham (the character) going on a rampage in the middle of Gotham (the city). Writer Tom King’s scripts are always sprinkled with subtle Easter eggs, much to the enjoyment of longtime Batman readers, so I love the fact that in the second panel, we see a sign for ‘Rogues Gallery’ in the middle of the city. This, of course, is a nod to the Dark Knight’s superior stable of super villains. In the midst of the chaos, we get a great scene with Alfred that I found to be one of the early highlights of the issue. Seeing him don the cape and cowl and get behind the wheel of the Batmobile was a fun inclusion and showing the miles per hour increase panel by panel as he hurtles towards Gotham was a unique method of story progression, both in terms of the writing and the sequential art that accompanied it. It was also a pleasure to see King allow Alfred’s patented sassiness and sarcasm to really shine, which is essential when it comes to Bruce’s beloved Butler.

It doesn’t take long before King kicks things into overdrive as Batman kicks his way into the fight with Gotham. Batman is the World’s Greatest Detective and never goes into a fight without knowing all there is to know about his opponent. He knows that with Gotham, he doesn’t need to pull his punches so it’s great to see King allow Batman to take things up a notch. Batman hurls Batarangs into Gotham’s torso, subjects him to a car explosion and crashes an actual plane into him. King being able to script this and not have it feel out of character takes an incredible understanding and appreciation of the Caped Crusader and his moral code.

There’s some solid character development in the scenes with Duke Thomas and Claire, AKA Gotham Girl, which help break up the story and add some welcomed humor to the issue. Duke hasn’t gotten a ton of page time in this arc, which I found surprising given the significant role he played in the Batman Rebirth one-shot. In any case, it was nice to see him have a big impact in this issue by helping Claire overcome her Psycho-Pirate-induced fear and expand on her and her brother’s powers. The idea of how their powers work that King presents us with is intriguing, but Claire said that they “bought” them and didn’t really elaborate on that, so I’m hoping King was planting seeds for a future story and doesn’t leave this plot point forever ambiguous. Regardless, I think King’s concept was well executed and it allowed me to suspend my disbelief enough to accept the fact that Gotham was able to at least stand toe-to-toe with the Justice League. The part I have difficulty believing is that he is able to manhandle all eight members of the League on his own. While it definitely established Gotham as a legitimate and serious threat, it almost felt like too much and I think the story may have worked better if the League was omitted.

The issue comes to a close in an epic fashion thanks to Gotham Girl, who makes the save just as Gotham is about to deliver a final blow to Batman. I won’t spoil the conclusion, but it certainly holds the level of gravitas one would expect from such a story. We also get some particularly ominous words from Claire in the caption boxes of the final pages that seem to foreshadow what may come, and King makes it clear that Gotham Girl is going to be a key figure in Batman’s future. Two other characters that are sure to be a part of that future are Hugo Strange and Psycho-Pirate, who were surprisingly absent from this issue. Although Strange is certain to be back once the ‘Monster Men’ storyline begins, it seemed odd to not have him and Psycho-Pirate make an appearance given their roles earlier in the arc. It’s not a fault, per se, but it is something I found myself questioning after re-reading the issue.

IT WAS A FIERY AND EXPLOSIVE NIGHT

The art team on this issue of Batman consists of Penciler David Finch and Inkers Sandra Hope, Matt Banning and Scott Hanna. The Colorist, of course, is workhorse of the industry and the newly engaged Jordie Bellaire. Much like my last review of this title, I’m really feeling everything David Finch is doing. I wish there was only one Inker because really, that’s the only inconsistency I can find in terms of the art. As for Finch himself, his line work is clean and tight, and every last detail is treated with the utmost importance. I’ve previously made comparisons between his work and the work of my favorite Batman artist, Jim Lee. What’s interesting is that in this issue, I also found some similarities between Finch and another Batman artist I hold in the highest regards, Greg Capullo, at least in some panels. This is apparent when we get the close-up shots of Gotham Girl in the Bat Cave as Finch’s depiction of her, particularly in the eyes and nose, is evocative of Capullo’s style. The fact that Finch’s style brings to mind two of my favorite Batman artists of all time is definitely a plus for me but make no mistake, he is an artist that can absolutely stand on his own two feet. Everything from the striking features of the characters to the composition and layout of each page are first-class.

As I briefly touched upon earlier, I find the inking to be a little inconsistent but that’s to be expected when you have three Inkers on a single book. The colors, on the other hand, are stellar throughout the issue. Bellaire’s palette selection consists of lots of warm, earthy colors such as blues, oranges and greens. This is a very different approach to the typically dark and dreary Gotham City but it’s really working for me. Perhaps my favorite example of Bellaire’s work comes from the car explosion, which comes to life thanks to the fiery blend of reds, oranges and yellows, contrasted beautifully with the dark shadows of Gotham’s body as he screams out in pain.

BOTTOM LINE: THE END OF THE BEGINNING OF AN ERA

This is an excellent finale to what has been the beginning of the era of Tom King on Batman. King is an incredibly talented writer but at the start of this arc, I knew his biggest hurdle was going to be not falling victim to the shadow cast by Scott Snyder and Greg Capullo. Now, at the end of his first arc, I feel comfortable saying that King has laid the framework for an iconic run of his own on the Batman title. David Finch’s art has been consistently praiseworthy and I definitely hope to see him return for a future run but I understand the need for a change due to twice-monthly shipping. Bottom line is that this is an exceptional issue of Batman that I highly recommend getting your hands on.

Now, at the end of his first arc, I feel comfortable saying that King has laid the framework for an iconic run of his own on the Batman title.