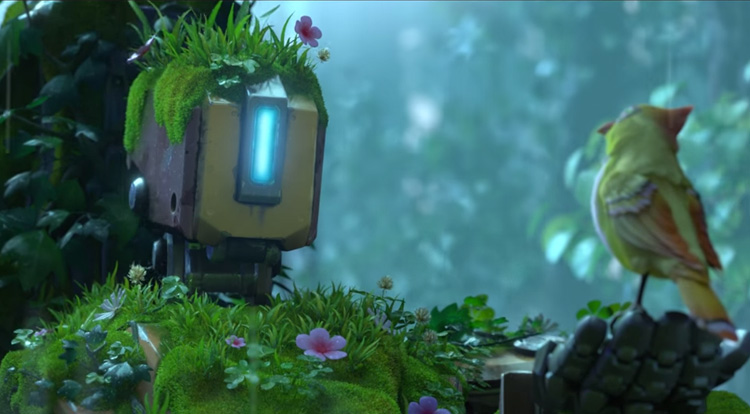 Blizzard took the stage at GamesCon in Germany today to give players a look at the first new map for Overwatch, make Reinhardt fans happy, and to premiere their latest animated short starring Bastion.

Aaron Keller, Assistant Game Director from Blizzard, took the stage first at GamesCon this afternoon to share more details on Eichenwalde, the first new map for Overwatch. Eichenwalde was revealed earlier this week, but Keller gave more story background for the location as well as the gameplay that will take place within the German castle.

Blizzard is designating Eichewalde as a hybrid map, meaning teams will have to capture a point and then escort a payload or the reverse to win the round. Nothing new for Overwatch players in that aspect as Hollywood already features the same structure. Keller did mention that this castle will force vertical play as teams will be able to scale the walls in order to gain an advantage, so get ready to climb with Hanzo and fly up with Phara.

The level will culminate within the throne room of the castle where a defeated Baldrich van Alder made his final stand. More importantly, Blizzard will be making Baldrich a new Legendary skin for Reinhardt, which was met with wild applause from those in attendance.

Revealed at gamescom 2016, Eichenwalde is an Assault/Escort hybrid map set in an abandoned village on the outskirts of Stuttgart, Germany. The site of one of…

Project Director Ben Dai, appropriately dressed in a Bastion shirt with a Ganymede plushy, then introduced the short that most in the crowd and online showed up to watch. There is no point in me describing the moving story or beautiful visuals, just watch “The Last Bastion” for yourself:

Explore the origin story of Overwatch’s inquisitive transforming robot in our fifth animated short: The Last Bastion! Watch it now and then begin your watch:…

Before premiering the short VFX Supervisor Jeff Chamberlin made note of how Blizzard has been expanding the Overwatch backstory through the animated shorts, online comics, and a possible upcoming graphic novel. As each new short is released and is met with incredible love you have to wonder when the big announcement of a full animated film will come. Maybe later this year at BlizzCon? We can only hope.

The Reinhardt Legendary skin and new map Eichenwalde will be available shortly on PTR and will then roll out to all players in September when the large update hits PCs and consoles worldwide.