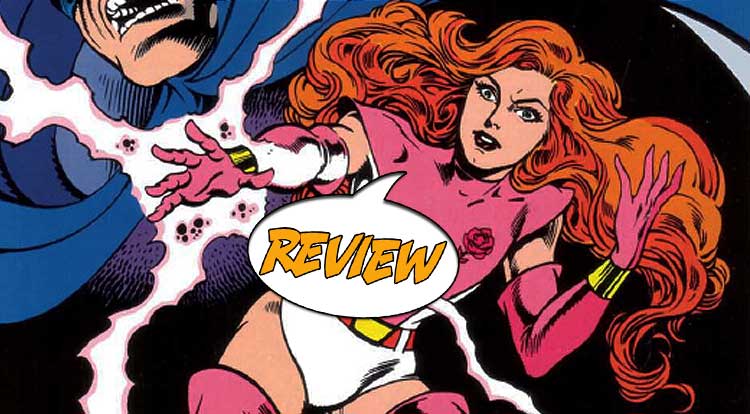 A blast from the past, with a brand-new bag (and one of the greatest costumes in comic-book history.)  Your Major Spoilers review of Psyche #4 awaits!

Previously in Psyche: Originally spinning out of the Champions role-playing game, The Champions were adapted into comics form at the now-defunct Eclipse Comics.  After a six-issue run, the series shifted over to Hero Comics (now Heroic Publishing), with several of the characters getting their own solo books.  One of those was Rose, The Psychic Detective, who has, as I’ve said, one of the few perfect superhero costumes iin comics history.  Due to the vagaries of ownership, Rose has become Psyche, and has been reintroduced to modern audiences…

PARTIALLY REPRINTS, BUT GOOD ONES

If you aren’t familiar with the Heroic Comics universe, it’s likely because you’re younger than the 80s comics boom that birthed them, but Psyche has always been one of the most interesting characters in their roster.  This issue presents a two-part story that the writers (and this reviewer) considers one of the best, putting Psyche in the middle of a Victorian mystery on a foggy moor, creating an air of Hammer Horror-style suspense which even her pink-and-white costume can’t unravel.  What starts out as just another mystery turns into an excavation of Psyche’s family history, with a couple of unexpected turns that don’t feel coincidental or forced, as they might in lesser hands.  We also get a strange tale of the wrestling game and a new story told by the character called Vanity that features a Warren Comics twist and some interestingly funky art.

YOU HAVE TO ADMIRE THEIR DEDICATION

Really, the biggest hurdle to entry for this issue is the price point: 52 pages for $9.50, which is roughly commensurate with a double-sized issue from Heroic, where the regular price point is $4.99.  With independent publishing, you often do have to pay a little more, and the quality of this issue is high enough that I’m able to make a strong case for even a ten-dollar cover price.  The fact that Heroic is still in the business after twenty years is impressive to me, and given the difficulty of finding back issues these days, you’d probably pay the same price for the three issues that hold these stories originally.  Mallonee’s love of these characters comes through in every page, and the art is strong throughout the issue, especially so in the main two-part story.

THE BOTTOM LINE: A TOUGH SELL, BUT GOOD STORIES

All in all, this issue is a good read, featuring an intriguing character in stories that feel neither dated nor too familiar, leaving Psyche #4 with a better-than-average 3 out of 5 stars overall.  If you take into account the amount of material you’re getting in this comic (and you’re willing to support independent publishers), you can get your money’s worth of entertainment in these pages, which will lead to more new material in future issues.  It’s the circle of comic book life, my friends, and we can all enjoy the ride…

Classic stories and some new material, a good answer to the question of how to get hard-to-find back issues...