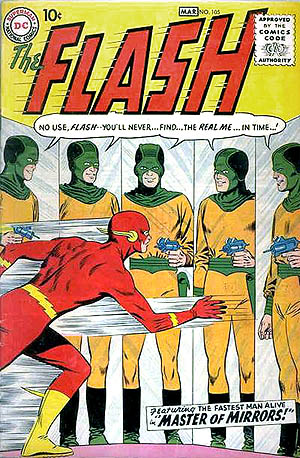 [Television] Mirror Master is finally coming to The Flash

For two seasons I’ve been waiting for The Flash creators to bring Mirror Master to the small screen. In season three, we’ll finally get the chance to see Sam Scudder.

According to Warner Bros. Television, Grey Damon, of NBC’s Aquarius, has been cast to play the original Mirror Master for the fourth episode of season three.

“One of the Flash’s most infamous Rogues, Sam Scudder — aka Mirror Master — is a smooth criminal with a huge ego. Upon discovering he now has the power to travel through any reflective surface, Scudder embarks on a massive crime spree to prove himself the greatest thief that Central City has ever seen.”

Sam Scudder discovered a way to get inside the reflection of a mirror, and in the process discovered he could travel through mirrors to commit his crimes. MIrror Master first appeared in The Flash #105 in March 1959, and was created by John Broome, and Carmine Infantino.